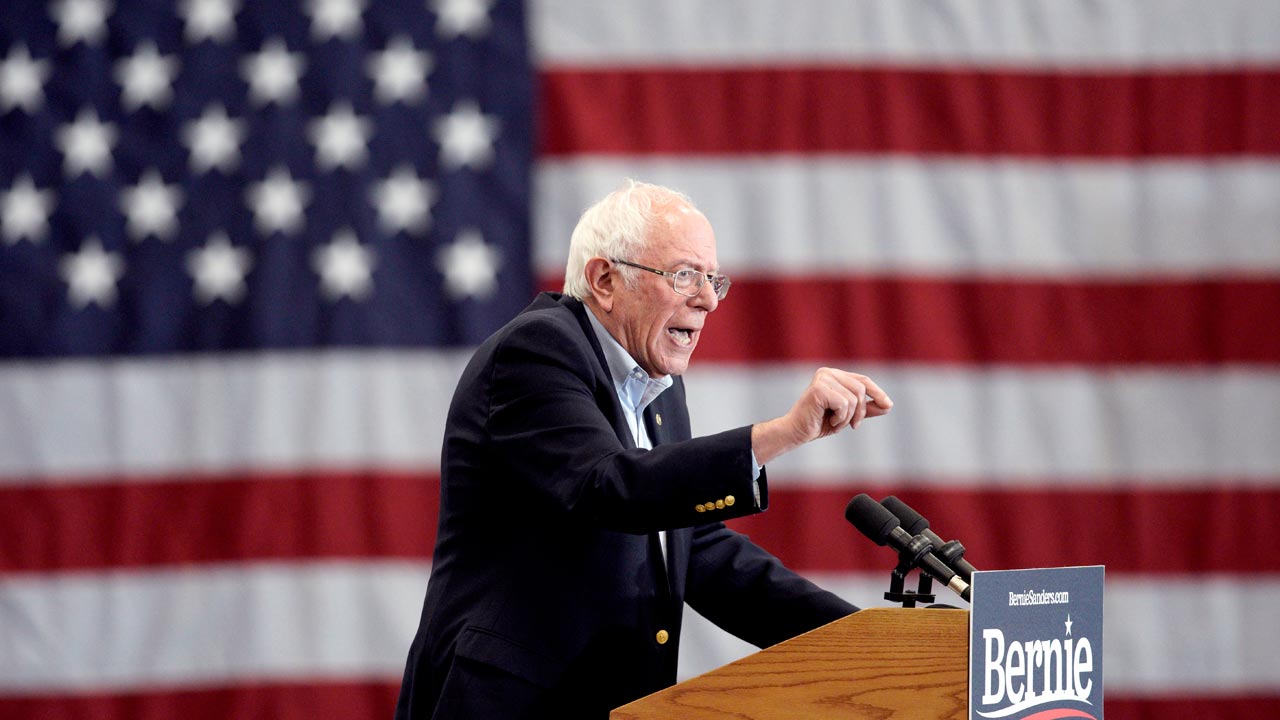 LONG BEACH — Bernie Sanders was greeted with booming cheers at a gathering of California Democrats Saturday, underscoring his popularity with the party’s liberal base as he looks to capture the biggest prize in the presidential primary season next year.
The decisions by Joe Biden and Elizabeth Warren to skip a weekend gathering of the California Democratic Party less than three months before voting begins gave rival candidates an opportunity to make inroads with the party’s most devoted activists, and Sanders’ reception made clear he remains among the favorites. Three years ago, the Vermont senator won 46 percent of the vote in California’s 2016 Democratic primary in a losing bid against Hillary Clinton.

He assured the crowd he was in good health, just months after suffering a heart attack, and rose from a chair to his feet to apparently emphasize the point during a candidate forum hosted by Univision, the Spanish-language television station. He earned cheers when fending off suggestions that his agenda was pulling the party too far to the political left. “I don’t think so, I honestly don’t,” he said.
After the forum concluded, dozens of Sanders supporters staged an impromptu rally in the lobby of the convention center, unfurling banners and chanting his slogan, “Not me, us.”
The convention stage gave candidates a chance to address devoted Democrats who are the backbone of the party and are coveted for their votes as well as potential volunteers and donors. Mail-in ballots for California’s primary will begin going out to voters on Feb. 3, the same day as the Iowa caucuses.

After a long campaign, candidates stuck largely to familiar scripts. But after lagging in polls and fundraising, former Obama administration housing secretary Julian Castro was confronted with an awkward question: Will he stay in the race?
Yes, he said firmly. The Iowa caucuses are 10 weeks away and that’s “10 lifetimes in politics,” Castro said.
He also criticized debate rules that could keep him off the stage in the next round. And Castro appeared to take a dig at billionaire rival Tom Steyer, saying “it’s wrong that people should be able to buy their way onto the stage, but folks that are working hard shouldn’t be able to get on that stage.”

Talking later with reporters, Pete Buttigieg acknowledged that he’s not well-known among Latinos, but he called it a “huge opportunity” to introduce himself to those voters in California in particular. He said his messages on immigration and health care — he favors allowing anyone to access Medicare without creating a completely government-run system — will resonate with Latinos.
Kamala Harris, meanwhile, kicked off the convention winning the endorsement of United Farm Workers, the union started by labor icons Dolores Huerta and Cesar Chavez. The union’s members, less than 10,000, voted to endorse Harris, offering her a show of home-state support.
On a busy weekend of politicking, Harris played to her home-state strength Friday night at two gatherings at local bars, one hosted by Equality California at a gay bar, where she recounted her record of marrying gay couples in 2004 as San Francisco district attorney and called for greater protections for transgender women.
The crowd roared when she declared herself the candidate who could go toe-to-toe with Donald Trump.
Through the convention hall on Saturday volunteers for various campaigns handed out stickers, led chants and signed up volunteers. Amy Klobuchar served slushies with a construction workers union, while the table for Warren set up plastic cups to represent her different plans and asked voters to place small black “billionaire tears” in the cup marking their favorite plan.
Warren, though, was absent from the gathering.

Sanders has made clear California is a key target for his campaign: He already hired 40 staff members in California, far more than any of his competitors, and is treating the state as comparable to early voting states like Iowa and New Hampshire.
Warren’s and Biden’s decisions to skip the party gathering drew a rare rebuke from Rusty Hicks, the chair of the state party.
“Your decision is a blatant disregard and disrespect to California’s grassroots leaders who make the phone calls, knock the doors, and give the money … in swing districts and swing states alike … year after year after year,” he tweeted.
This will be the third major gathering of Democratic contenders Biden is skipping in California; he avoided the party’s summer convention as well as a Democratic National Committee gathering. Warren attended both.

Biden appeared in the state Thursday, attracting a few hundred people to an outdoor rally at the edge of downtown Los Angeles. He spent Friday raising money in Seattle before heading to Las Vegas for a town hall Saturday. Warren planned to spend Saturday in Iowa, the first state to vote.
Yet Biden remains among a cluster of rivals with no clear front-runner, state and national polls suggest.
Some California Democrats speculate Biden is avoiding the crowd because it’s made up of activists known to heckle more centrist candidates, particularly those who don’t support Medicare for All. And, indeed, the large group of Sanders supporters almost certainly would have had a different greeting for Biden.
Others speaking at the Saturday night forum were New Jersey Sen. Cory Booker and businessman Andrew Yang.
Stacy Fortner of Valencia, California, also said she’s leaning toward supporting either Harris or Buttigieg.
Fortner, a 50-year-old IT worker, said she liked Harris’s comments on gun control as the mother of a daughter who knew some of the victims in this week’s shooting in Santa Clarita.
In 2016, she supported Sanders in the primary. She still likes what he has to say but is concerned about his age, she said, and thinks some of his supporters are “off-putting.”
“I love their passion and I love their vigor but sometimes they take it too far,” she said.