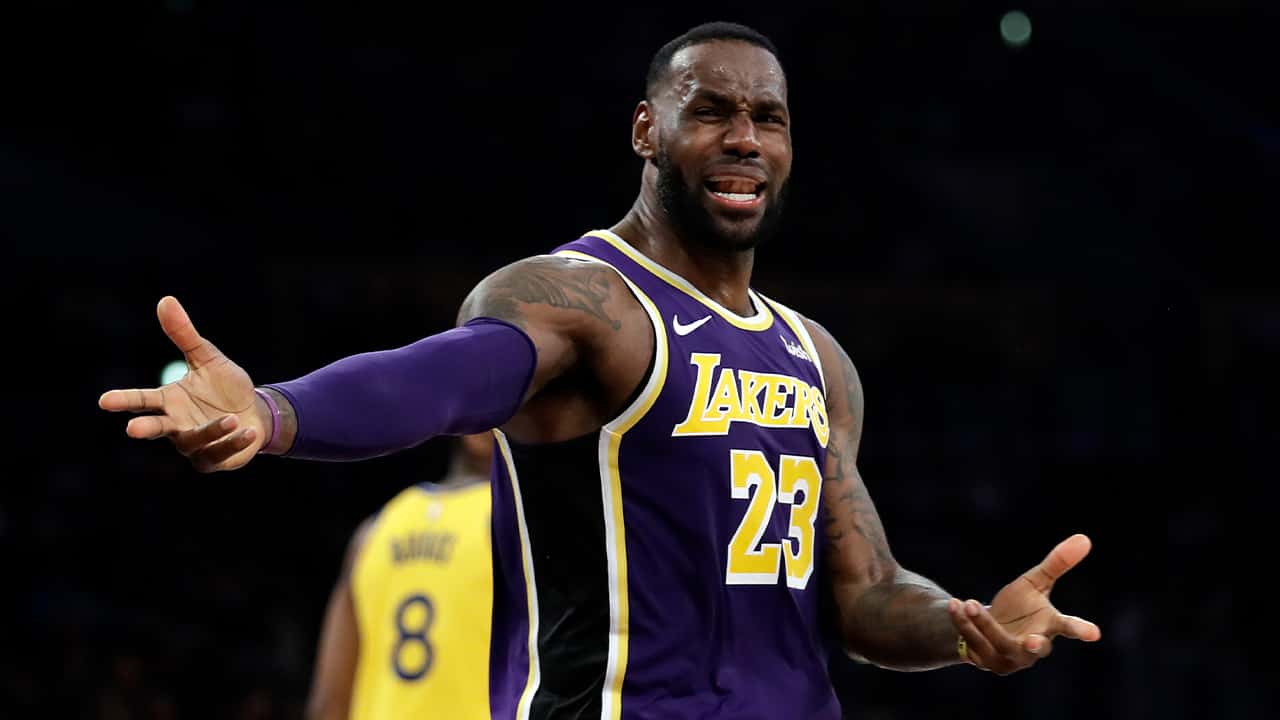 LOS ANGELES — No Anthony Davis for the first time this season, no problem for the Los Angeles Lakers.
LeBron James had 23 points and 12 assists in three quarters, Kyle Kuzma and JaVale McGee dominated the middle, and the Lakers rolled past the hobbled Golden State Warriors 120-94 on Wednesday night.
Kuzma scored 22 points starting for Davis and McGee had 18 points and 17 rebounds.
“Our bigs were amazing,” James said. “They controlled the interior both offensively and defensively.”
The Lakers improved to 9-2 despite playing without Davis, who was held out because of a sore right shoulder.
“If one of our stars go down, we have to pick up for him,” McGee said.
The Lakers had 31 assists in the second half of a back-to-back. Their 39 at Phoenix a night earlier was the franchise’s most since April 14, 2009. They notched 31 against defending NBA champion Toronto.

Los Angeles Extended Its Lead to 18 Points in the Second

“We know we’re very good when we’re moving the ball,” said James, adding that assists totaling in the high 20s to 30s “let’s me know we’re definitely paying attention.”
James & Co. didn’t waste any time breaking out. He won the opening tip and McGee scored off his alley-oop pass. James keyed a 12-0 run with six points in the first quarter when the Lakers shot 70 percent and made five 3-pointers. Their 38 points tied a season high for points in a quarter.
Los Angeles extended its lead to 18 points in the second. The Warriors scored 11 in a row to get within seven, but the Lakers quickly restored their lead to double digits at halftime. James’ vicious one-handed dunk riled up the crowd. Their 67 points tied a season high for points in a half.
Former Laker D’Angelo Russell scored 21 points for the Warriors, who lost their fifth in a row and fell to 2-10, worst in the West.
“We’re playing hard, but we have defensive lapses and it adds up,” Russell said. “We have to figure it out. We have guys that are capable, but we have to continue to learn.” Los Angeles Extended Its Lead to 27 in the Fourth

Golden State is but a shadow of the franchise that made five straight NBA Finals appearances. Stephen Curry and Klay Thompson are injured, and Kevin Durant departed in the offseason.
“We’re getting a great effort but we’re not executing,” Warriors coach Steve Kerr said. “Right now, we’re taking our licks and we must learn from our mistakes. Our young guys are learning by getting thrown into the fire.”
Twice the Lakers led by 23 in the third, the second time on a 3-pointer by Dwight Howard. He finished with 15 points and eight rebounds.
Los Angeles extended its lead to 27 in the fourth. McGee’s one-handed reverse dunk highlighted a 14-5 opening run.
“We did a good job locking in on defense and put a lot of pressure on the paint,” Kuzma said.
James sat out the final period, but he still assisted, pulling Davis and DeMarcus Cousins out of their seats to join the team during a timeout.

Warriors: Their five-game winning streak against the Lakers in LA ended. Golden State had won 10 of 11 overall in the series. … Draymond Green had 10 points in his second game after missing five straight with a left index finger sprain.
Lakers: Davis is expected to return Friday. … Rajon Rondo (mild right calf strain) sat out but will return for the next back-to-back on Nov. 22-23. … They are 5-1 at home. … Their only losses have been to the Clippers and Raptors.

James has a history of being better in the second half of a back-to-back.
“We don’t have shootaround,” he said by way of explanation. “I get to sleep in.”

Warriors: Host Boston on Friday, one of just two home games during a 10-game stretch that has them traveling from Houston to Minneapolis to New Orleans.
Lakers: Host Sacramento on Friday in a game that brings ex-Lakers coach Luke Walton back to Staples Center. They went 3-1 against the Kings last season.