BUFFALO, N.Y. — Snow and cold records fell as an arctic airmass that started in Siberia spilled over a big chunk of the eastern half of the U.S., including the normally mild South, on Tuesday.

The mid-autumn taste of winter brought record single-digit temperatures to Chicago and environs; set snowfall records in Buffalo and Detroit; dusted cars with snow in Memphis, Tennessee; and froze lakes in Minnesota weeks earlier than usual.

“Normally, you don’t see this kind of weather to well into December. It’s caught us off guard, as far as getting crops harvested. Doing what we can in between snow, rain, mud.” — Wisconsin farmer Bob Grove

Wisconsin farmer Bob Grove still has soybeans in the field, 20 miles south of Milwaukee, but said he can’t harvest them because the snow will clog the machinery.

“Normally, you don’t see this kind of weather to well into December,” Grove said. “It’s caught us off guard, as far as getting crops harvested. Doing what we can in between snow, rain, mud.”

The roughly 10 inches of snow in Buffalo and Detroit by Tuesday morning was a record depth for the time of year, weather service records show. Areas of Vermont and Maine saw similar totals as a wintry mix also closed or delayed hundreds of schools in northern New England.

“This is an air mass that’s more typical for the middle of January than mid-November,” National Weather Service meteorologist Kevin Birk said in Chicago, where Tuesday morning’s low of 7 degrees (minus 13 Celsius) broke the previous record of 8, set in 1986. “It is pretty much about the coldest we can be this time of year (and) it could break records all over the region.”

In St. Louis, the mercury dipped to 11 degrees, breaking a record for the date that had stood since 1911.

Related Story: Will It Be December Before Fresno Has Rain?

Warming shelters in Memphis offered relief from a reading of 21 degrees, also a record low for the date.

Schools and businesses as far south as the Gulf Coast states opened late or closed Tuesday because of the unusual cold.

About 20 school systems delayed opening across north Alabama under the threat of wintry precipitation, including all the public schools around Huntsville.

Even more opened late or closed in Tennessee, and a handful of businesses and schools opened late in Georgia.

Forecasters said daytime temperatures would remain in the 30s across a wide area of the South. Freeze warnings reached from eastern Texas to coastal South Carolina, with overnight lows predicted in the 20s. 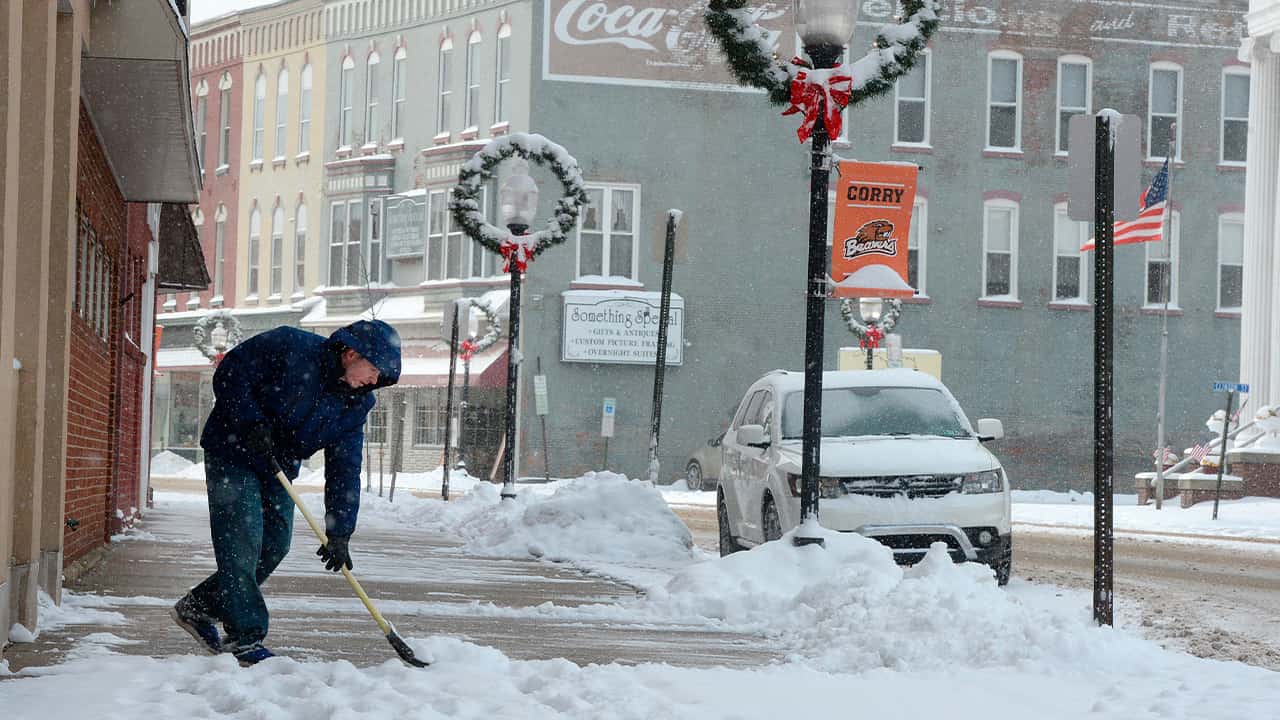 Ben Barney shovels the sidewalk on North Center Street in downtown Corry, Pennsylvania on Tuesday, Nov. 12, 2019. Erie and Crawford counties were under a winter storm warning from the National Weather Service in Cleveland. (Jack Hanrahan/Erie Times-News via AP)

The dip to 8 degrees in Indianapolis gave the city its earliest recorded fall temperature in the single digits. The closest similar reading was 11 degrees recorded on Nov. 3, 1951.

In Ohio, authorities investigated two fatal wrecks in snowy and icy conditions Tuesday, one on the Ohio Turnpike in Richfield and another in Clark County. Seven passengers on a New York City-bound bus escaped serious injury when it turned on its side on a snow-slicked highway south of Syracuse. A section of Interstate 90 in Pennsylvania was back open Tuesday after being closed overnight because of jackknifed tractor-trailers.

The Eaton County Sheriff’s Office in Michigan said two women, ages 81 and 64, and a 57-year-old man were killed Monday in a two-vehicle crash caused by poor road conditions. And in Kansas, the Highway Patrol said an 8-year-old girl died in a three-vehicle wreck.

Officials in central Wyoming searched for a 16-year-old boy with autism who disappeared Sunday wearing only his pajamas.

In some areas, the mercury fell quickly. Temperatures in Denver climbed past 70 degrees over the weekend only to fall to 14 degrees early Monday.