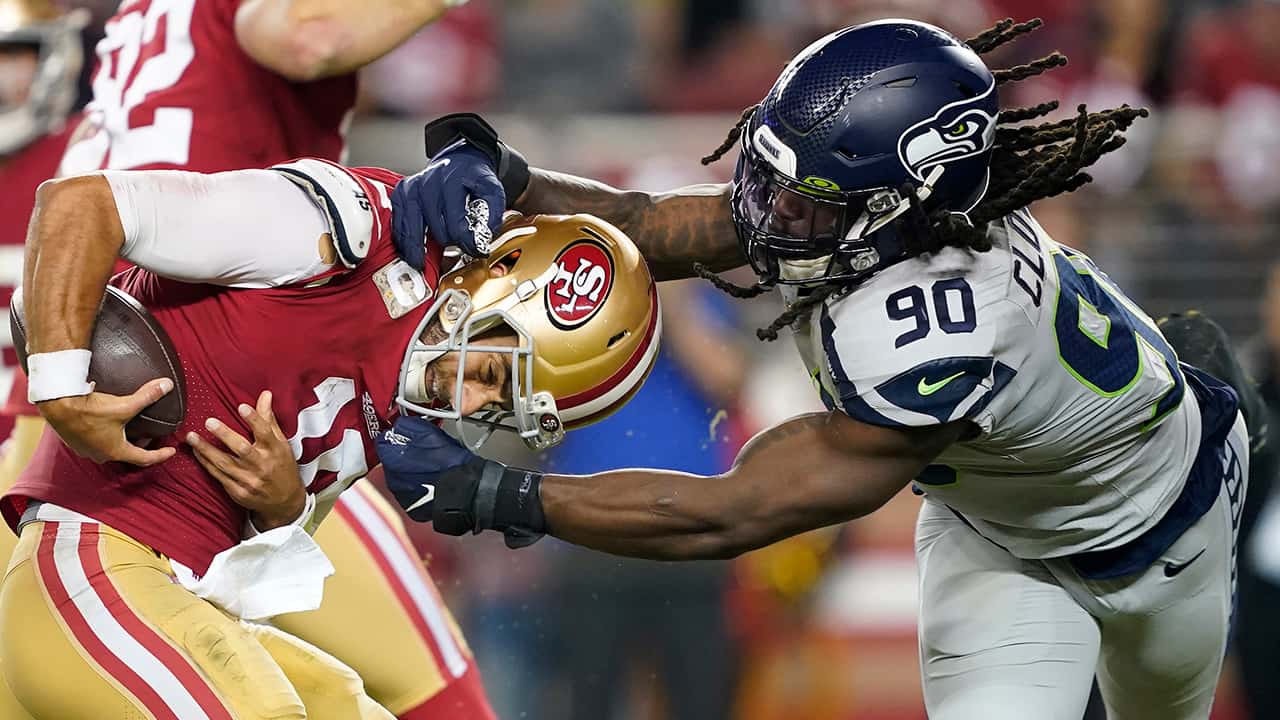 ‘Just Rushed It a Little Bit’

It was Wilson’s second interception of the season and just the second red-zone interception in overtime in the last 25 years, according to STATS, with Jacoby Brissett having the other in 2017 against San Francisco.
Greenlaw returned it 47 yards to the Seattle 49 and the Niners moved the ball 20 yards before McLaughlin missed badly to the left on a 47-yard attempt. McLaughlin had made his first three field goals after being signed earlier in the week when Robbie Gould went down with a quadriceps injury.
“Just rushed it a little bit, hit it a little high and unfortunately missed it,” McLaughlin said.
The teams then traded punts, the Seahawks took over at their 36 with 1:25 remaining after Jimmy Garoppolo threw three straight incompletions as San Francisco burned only 14 seconds off the clock with Seattle out of timeouts.
“Definitely wish we had taken more time off the clock, but was counting on us catching one of those balls,” Shanahan said.
After the defenses dominated much of the game with each team scoring a defensive touchdown and generating three takeaways apiece in regulation, the quarterbacks traded late drives for field goals that set the stage for overtime.
Wilson drove the Seahawks 47 yards before Chris Carson was stuffed on third-and-1, leading to a 46-yard field goal by Myers with 1:45 to play.
Garoppolo and the Niners took over from there and used short passes to move the ball down to the 29 where McLaughlin kicked a 47-yard field goal with 1 second left to tie it at 24. The Seahawks shut down San Francisco’s running game, allowing only 3.2 yards per carry and forced Garoppolo into an off night with his receivers contributing with several drops. Garoppolo finished 24 for 48 for 248 yards, one touchdown and one interception.

Jadeveon Clowney had his biggest impact since joining Seattle this season. He returned a fumble 10 yards for the Seahawks’ first touchdown, set up another with a strip sack and had five quarterback hits on the day.

The 49ers got a defensive score of their own in the fourth quarter. K’Waun Williams sacked Wilson, knocking the ball loose to right tackle Germain Ifedi. Ifedi tried to run with the ball but Fred Warner knocked it loose again and DeForest Buckner ran it in 12 yards for the score.
“What was he thinking? He thought he was going to score,” coach Pete Carroll said. The Seahawks were poised to take the lead into halftime when D.K. Metcalf took a short pass from Wilson and ran it inside the 5. But as he was fighting for more yardage, safety Jaquiski Tartt ripped it out of his hands at the 2-yard line for an impressive fumble recovery.

Diggs started in his first game for Seattle since being acquired last month in a trade from Detroit.
Receiver Josh Gordon also made his Seahawks debut after being claimed off waivers last week from New England. He caught a 13-yard pass to convert a third down on the late field-goal drive in the fourth quarter and another to convert a third down in overtime.

Seahawks: WR Tyler Lockett left with a bruised leg and might have to stay in the Bay Area overnight. TE Luke Willson left with a hamstring injury.
49ers: Sanders (ribs) left in the first quarter. DT D.J. Jones was sidelined later in the first half with a groin injury. LB Azeez Al-Shaair left with a concussion in the third quarter. RB Matt Breida left in the second half with an ankle injury. DL Ronald Blair left the game with a knee injury.

Seahawks: Week off before visiting Philadelphia on Nov. 24.
49ers: Host Arizona on Sunday.