In the opening weeks of life after Kawhi, the defending champs are learning they might be deeper than even they realized.

“I think everybody that stepped out there didn’t only contribute, but they played awesome.” — Toronto coach Nick Nurse

They definitely had enough to hold off Staples’ marquee tenants in a remarkable early-season win.

Pascal Siakam had 24 points and 11 rebounds, Fred VanVleet finished with 23 points and 10 assists and the Raptors snapped the Los Angeles Lakers’ seven-game winning streak with a 113-104 victory Sunday night.

Chris Boucher matched his career high with 15 points for the Raptors, who have won three straight and six of seven. Two days after they lost starter Kyle Lowry to a broken left thumb and top reserve Serge Ibaka to a sprained right ankle, Toronto still made a decisive rally with four reserves on the floor early in the fourth quarter before hanging on late for its 10th consecutive win over the Lakers.

“I think everybody that stepped out there didn’t only contribute, but they played awesome,” Toronto coach Nick Nurse said.

Norman Powell scored 14 points while starting in Lowry’s spot for Toronto, but every starter except Siakam was watching from the bench when the Raptors made a 17-6 run to start the fourth with nine points from Boucher. The Raptors also got 10 points from Rondae Hollis-Jefferson in his first game action since Oct. 26, while rookie Terence Davis reached career highs of 13 points, three assists and five rebounds in his 17 minutes.

“It was great,” VanVleet said. “Best show I’ve seen all year. Those guys, just seeing them play, I know Coach has been hard on some of those guys, and to see them break through and have a moment, they’ve been working so hard. That’s what the NBA is about, is waiting for your opportunity, and you couldn’t find a better place to have it than LA in the bright lights against one of the best teams in the league.”

Davis and James Both Had Big Games

Toronto led 104-92 with 3:50 to play on Davis’ third 3-pointer, but Kyle Kuzma hit back-to-back 3-pointers while LA scored eight straight points. The Lakers then missed four consecutive 3-pointers with the chance to pull even, and Siakam threw down back-to-back dunks on the fast break to seal it, punctuating the Raptors’ repeated success in transition offense.

“Playing hard is the most important thing, and that’s what we did,” said Siakam, whose 3-for-15 start from the field prevented him from matching his 44-point effort in New Orleans two nights ago. “Everyone is understanding their role and playing to their strength.”

Anthony Davis scored 27 points and LeBron James had 13 points, 15 assists and 13 rebounds in his 85th career triple-double, but the Lakers lost for the first time since opening night against the Clippers. The Raptors used a zone defense at times, and they also regularly employed what Davis described as “a weird double-team” to force the Lakers out of their rhythm.

“They’ve still got championship players over there,” James said. “Don’t matter if they were short-handed. … They were the better team tonight, for sure. We had good opportunities to win the game, but they turned up in that fourth quarter.”

Davis and James both had big games, but the Lakers’ supporting cast wasn’t helpful and their team defense didn’t look nearly as sharp as it had been in recent games. Kuzma scored 13 of his 15 points in the fourth quarter.

“We’ve got to get our offense clicking,” Davis said. “We’ve got to be able to score a little bit more, just for nights when our defense might not be there or they are making tough shots.” 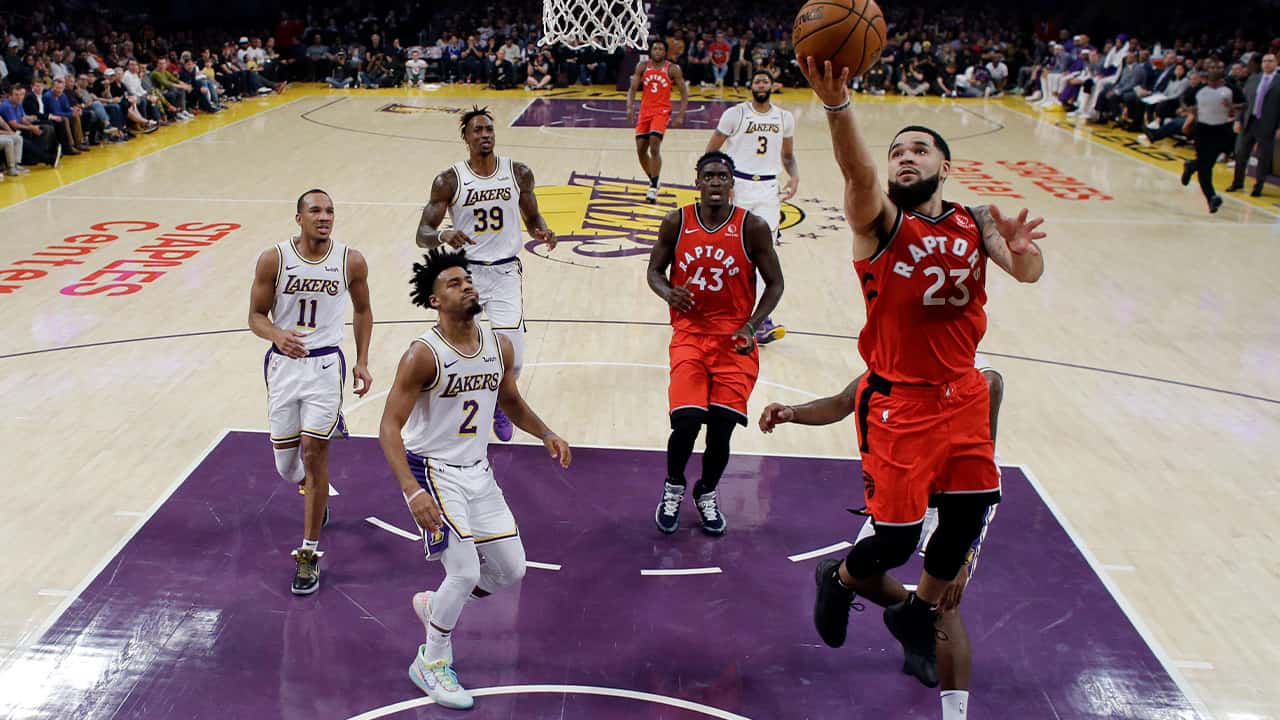 Danny Green went scoreless on 0-for-5 shooting in 27 minutes for the Lakers, who signed him to a two-year free agent deal in the summer. The sharpshooting veteran won a ring with the Raptors last year while shooting a career-high 45.5% on 3-pointers during his sole season in Toronto.

Boucher punctuated arguably the biggest game of his NBA career by blocking James’ layup attempt in the fourth quarter. The undrafted Canadian who was on the last two teams to win the NBA title blocked three total shots and went 7 for 11 from the field.

“I’m going to remember this forever,” Boucher said. “I always wanted to play against (James and Davis), and to get a win makes it even better.”

Raptors: Ibaka is returning to Toronto for treatment. … Lowry will be out for “a couple of weeks, minimum,” Nurse said. … Nurse won his first coaches’ challenge on a foul called against Siakam in the third quarter. Nurse had gone 0 for 6 this season on challenges. He celebrated by hugging his assistant coaches and a Lakers fan at courtside. “Biggest moment of the game,” Nurse said with a grin.

Lakers: Rajon Rondo has progressed to 5-on-5 full court workouts, but the veteran point guard still isn’t ready for his season debut. He has a right calf strain. … Troy Daniels hit three 3-pointers and finished with 11 points.

Raptors: Stay in the building to face Kawhi Leonard and the Clippers on Monday night.