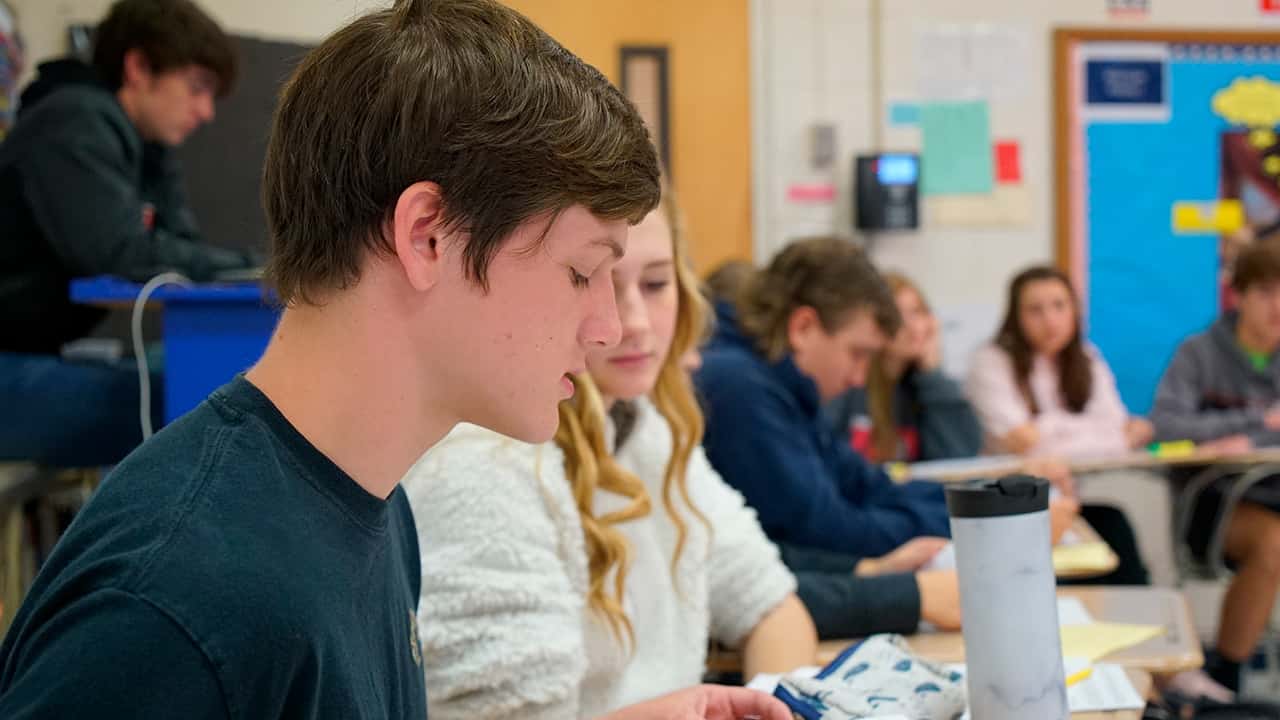 BEAR CREEK, N.C. — The 10th graders in Aedrin Albright’s civics class at a rural North Carolina high school had done their homework, and now it was time to decide: Should President Donald Trump be impeached?
The students dragged their chairs across the room, those who opposed removing Trump from office on one side, those in favor on the other. Undecided students were in the middle.

Many Students Have Minds Made Up

Like many members of Congress who will decide the Republican president’s fate, most of the students in Albright’s class had already made up their minds and wouldn’t be swayed.
The tally at the start of class Tuesday: 15 against impeachment, three for and 10 undecided. The six precincts in Bear Creek, where the school is located, voted almost 55 percent for Trump in the 2016 presidential election, while Chatham County went for Democrat Hillary Clinton. Both candidates were represented in campaign signs hanging in the classroom.
“The Democrats have just been slamming Trump and trying to find every little thing, ever since he got into office,” student Bryce Hammer said. “Just to try and get a reason just to kick him out and impeach him.”
Arguing for impeachment, Francisco Morales said, “He’s accused of asking foreign help to interfere with elections. And then the day after (special counsel Robert Mueller testified before Congress), he asked foreign help to help him in the next election. So, for me, it kind of shows that he doesn’t really care about how people think about what he does with foreign countries.”


Related Story: Do We Need to Worry About a Government Shutdown During Impeachment?

Emma Preston was undecided. “How many months does he have until the next election? Not that many,” she said. “So, if we’re just going to sit here and have this argument until the next election, it’s a waste of time. There shouldn’t be an impeachment process going on when there’s about to be a reelection.”
Albright said she has included impeachment in her lesson plans for all the 18 years that she’s taught civics.
For teachers who don’t regularly include impeachment in their curriculum, The Choices Program at Brown University and the Penn Graduate School of Education are among those organizations that provide online lesson plans. Civics teacher Aedrin Albright stands before her class at Chatham Central High School in Bear Creek, N.C., on Tuesday, Nov. 5, 2019. The class is debating whether President Trump should be impeached. The House impeachment inquiry into Trump’s dealings with Ukraine has become a teachable moment in classrooms around the country as educators incorporate the events in Washington into their lesson plans.(AP Photo/Allen G. Breed)

Understanding What Is Happening and Why

Teaching impeachment while Congress is investigating charges against the sitting president is a unique opportunity for teachers and students, said Sigal Ben-Porath, education professor at Penn.
“Make time for it, even if it’s not on your lesson plan,” she said.
Ground your students in constitutional and procedural facts and then “get the students speaking,” she said. “The best way for people to learn from such events is to be active. They have to be talking, saying their views, discussing their views, arguing their views.”
That includes understanding what is happening and why.
On the day in September when the House said it would begin a formal impeachment inquiry, teacher Mark Westpfhal at the Capitol Hill Gifted and Talented School in St. Paul, Minnesota, switched gears and put together a three-day “mini-unit” impeachment for his seventh grade American studies class.
He required his students to differentiate between what they believe and what they know. The school is located in “an extremely liberal region,” he said, and most of his students support Trump’s impeachment and removal from office. They were “quick to argue that he has done so many illegal things, but when I asked them to describe the things he has done and how those things violated the law, they slowed down a little,” said Westpfhal, who frequently brings current events into his lesson plans. “We discussed how emotion and partisanship can dictate our views.”
For teachers who want to steer clear of the controversy and politics of impeachment, “focusing on the history just feels really safe,” said Emma Humphries, chief education officer at iCivics, a nonprofit that provides educational online games and lesson plans to promote civics education. “It’s also critical for students understanding what impeachment is,” she said.

Importance of Communication Between the Teacher and Parents and Administrators

Those discussions could include the impeachment cases against Andrew Johnson, Richard Nixon and Bill Clinton.
Still, she’s a “huge advocate” for discussing controversial issues in class.
“If it gets out of hand, if the kids are getting disrespectful, you have to, need to, shut it down,” she said. The next day, she said, the teacher can talk about what happened and set ground rules.
She stressed the importance of communication between the teacher and parents and administrators.
But what if students ask teachers about their political views? Do they disclose them?

“It’s a pedagogical choice, not an absolute right or wrong,” said Paula McAvoy, co-author of “The Political Classroom” and assistant professor of social studies education at NC State University. “Sometimes, sharing your view is helpful to students, and sometimes sharing your view kills the discussion.”
Albright chooses not to share her views, although some enterprising students were able to find out that she’s registered as a Republican. Westpfhal doesn’t discuss his views, either, although his students have searched him on Google to discover his political past, including connections to Democratic and Republican politicians and city leaders.

The Debate Began Calmly and Respectfully but Then Got Animated


“I don’t think it’s my job as a teacher to influence them politically. I think it’s my job to teach them the two sides, or the three sides or the four sides. So, it’s not my job to say, ‘Yes, he should be impeached.'”  — Aedrin Albright, civic teacher
When students ask her what she thinks, she asks them what they think.
For the debate, Albright chose the philosophical chairs format, in which students choose and argue their sides, citing pro- and anti-impeachment articles that they read. They could switch sides during the discussion, and the undecideds were encouraged to choose one.
The debate began calmly and respectfully but then got animated. Albright shushed the anti-impeachment students and reminded them to be civil. The pro-impeachment student who was speaking hadn’t yielded the floor.
Before the class ended, the anti-impeachment side had attracted three more students, while one student had joined her pro-impeachment classmates. Six students remained undecided.
Overall, the discussion went well, Albright said. She was especially pleased that students cited source material.
“I have hope,” she said. “These kids give me hope, every day.”