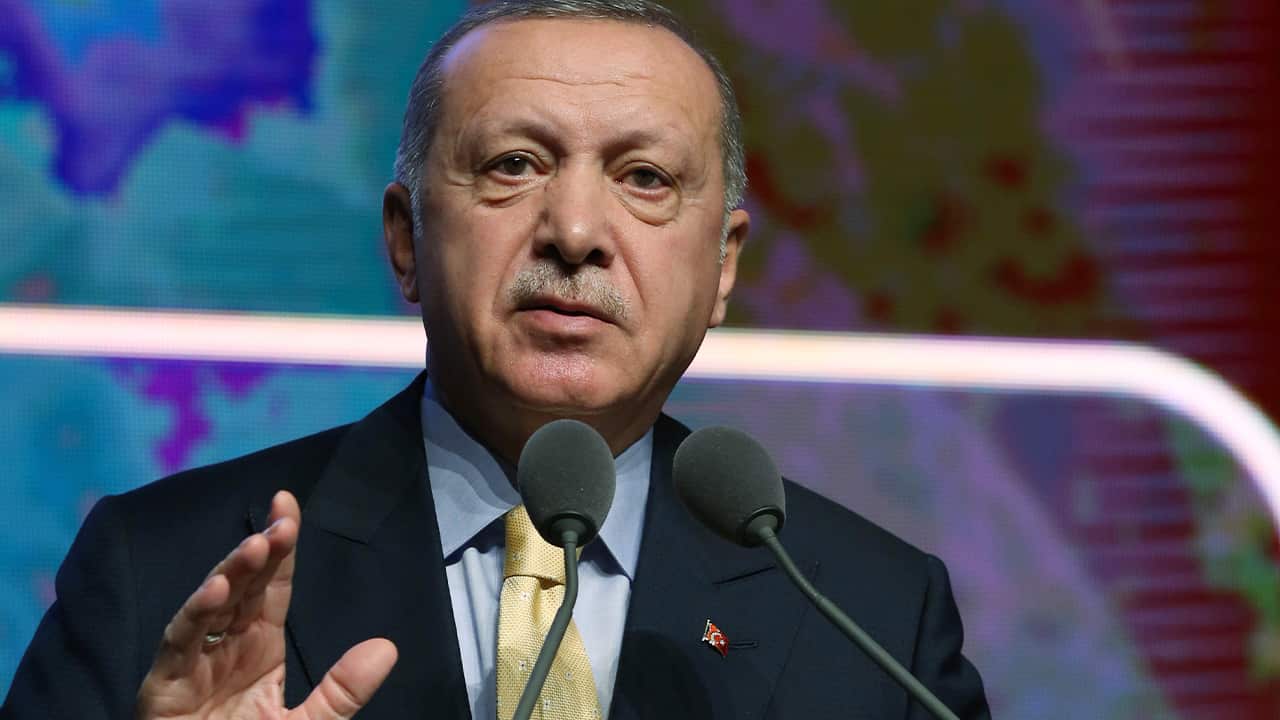 FILE – This file image made from video posted on a militant website April 29, 2019, purports to show the leader of the Islamic State group, Abu Bakr al-Baghdadi being interviewed by his group’s Al-Furqan media outlet. In his last months on the run, al-Baghdadi was agitated, fearful of traitors, sometimes disguised as a shepherd, sometimes hiding underground, always dependent on a shrinking circle of confidants. (Al-Furqan media via AP, File)

Awad was with her husband, daughter-in-law and five children when she was detained. A Turkish official said the 65-year-old sister is suspected of being affiliated with the extremist group and called her capture an intelligence “gold mine.” Authorities had posted a picture of the sister.
It was not Immediately clear if Awad’s capture led to intelligence that allowed for the detention of the wife.
One of al-Baghdadi’s wives is an Iraqi known by the name of Nour, the daughter of one of his aides, Abu Abdullah al-Zubaie. She was identified by name by al-Baghdadi’s brother-in-law in a recent interview with al-Arabiya TV. The brother-in-law, Mohamad Ali Sajit, who is in Iraqi custody, said al-Baghdadi had four wives when he last met him, sometime last summer.
Also, one of al-Baghdadi’s ex-wives was arrested in Lebanon in 2014, and was freed a year later in a prisoner swap with al-Qaida. The Iraqi ex-wife, Saja al-Dulaimi, had fled from al-Baghdadi in 2009 while pregnant with his daughter. At one point, al-Baghdadi was also believed to have married to a German teenager in 2015 but she was reported to have fled a year later.

The raid that killed al-Baghdadi was a major blow to his extremist group, which has lost territories it held in Syria and Iraq in a series of military defeats by the U.S-led coalition and Syrian and Iraqi allies.
Al-Baghdadi’s aide, a Saudi, was killed hours after the raid, also in northwestern Syria, in a U.S. strike. The group named a successor to al-Baghdadi days later, but little is known about him or how the group’s structure has been affected by the successive blows.
Up and until his death, al-Baghdadi had moved from place to place in eastern Syria amid a tightening U.S.-led campaign against his group as IS-held territory fell bit by bit. He ended up in Idlib, in northwestern Syria, an area controlled by a rival, al-Qaida-linked militant group. It was not clear if any of his wives were with him at the time of the raid, during which two of his children were killed.