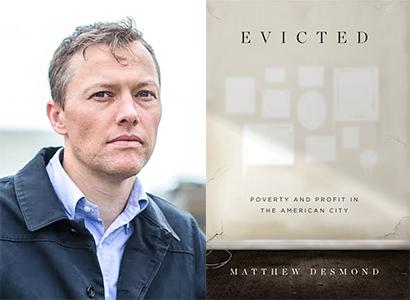 New York Times best-selling author Matthew Desmond will talk about the impact of eviction on the lives of low-income families and its role in racial and economic inequality at Fresno’s Warnors Theatre on Thursday night.

“Only 1 in 4 families that qualifies for housing assistance gets any.” — author Matthew Desmond
Desmond’s most acclaimed book is “Evicted: Poverty and Profit in the American City” for which he won a Pulitzer Prize, National Book Critics Circle Award, and Carnegie Medal.  He is a sociology professor at Princeton University.

A Window Into 21st Century Poverty

In “Evicted,” Desmond follows eight families in Milwaukee as they struggle to keep a roof over their heads. The book spotlights 21st-century poverty while providing fresh ideas for solving one of America’s most persistent problems. Demond concludes that when a family loses it home, “everything else falls apart.”
Adds Desmond: “When you ask people why they were evicted the big reason is nonpayment of rent. They can’t afford to keep a roof over their heads. Utilities are a big part of the story … while the third leg on the table is the lack of government help with housing.
“Most Americans think that the typical low-income family lives in public housing or gets housing assistance. The opposite is true. In years where you’ve had a growing gap between incomes and housing costs, only 1 in 4 families that qualifies for housing assistance gets any.”
One of the fixes proposed by Desmond is the expansion of Section 8 housing.
“I always come back to the question of scale. Do we believe housing is a right and that affordable housing is part of what it should mean to be an American? I say yes,” Desmond told Slate.com in a 2016 interview. “Then the question becomes how do we deliver on that obligation? I think taking this program that works pretty darn well and expanding it to all families below the poverty line is the best way to do that.”

Copies of “Evicted” will be available for sale and signing by Demond after his talk. Admission is free, but you can reserve seats at this link.
Demond’s appearance is sponsored by Fresno Housing Authority, Fresno State, Central California Legal Services, and the Fresno County Library.

For the next two months, the downtown library is hosting a national exhibit inspired by Desmond’s book. The exhibit opens Thursday at 5 p.m. The event at the Warnors follows at 6:30 p.m.

What Eviction Means in Fresno

To read “Evicted in Fresno: A Complex Story of Economic Burden — and Profit,” an op-ed written by Fresno State sociologists Janine Nkosi and Amber Crowell, go to this link.
An interview with Demond conducted by KVPR’s Laura Tsutsui is at this link.