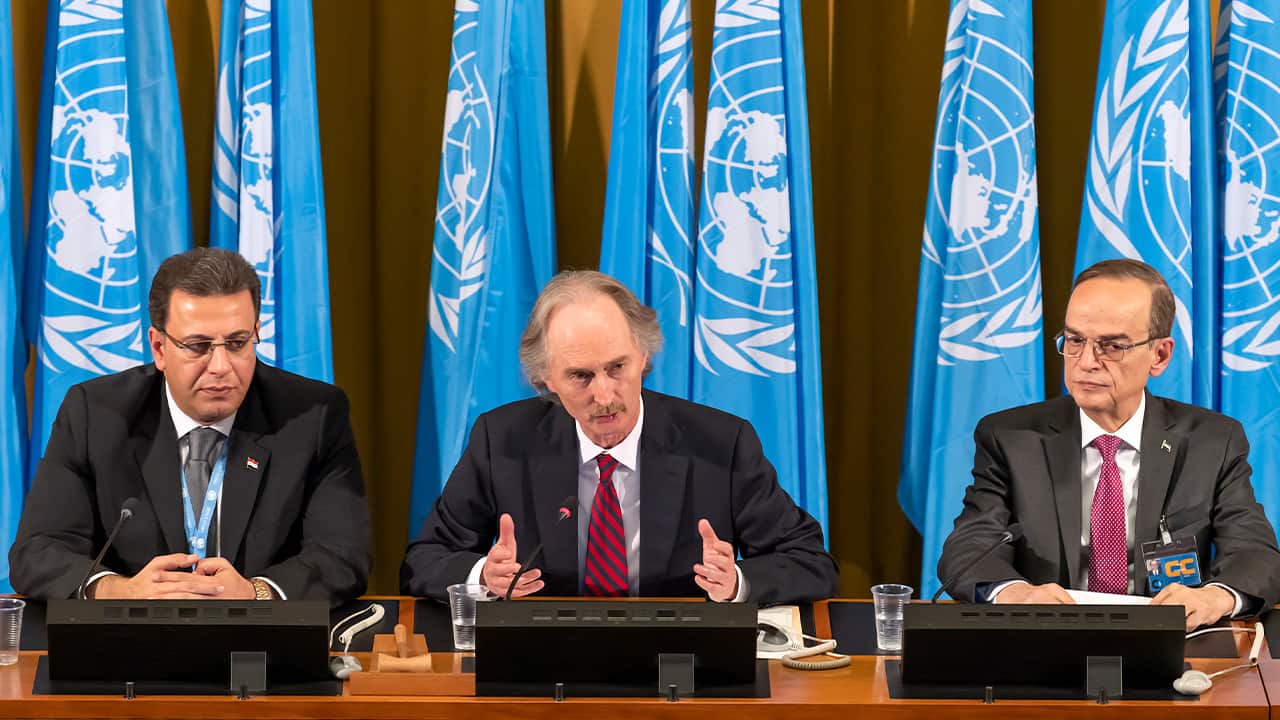 GENEVA — Syria’s government and opposition have delicately sat down for their first face-to-face talks, amid the hopes of millions of Syrians and governments from Washington to Moscow that they could become a step toward ending the country’s devastating 8 ½-year war.

The committee is made up equally of representatives of a delegation from President Bashar Assad’s government, the opposition and civil society. A core “drafting body” of 45 participants — each delegation has a third of the seats — is to carry out the harder work of fleshing out the text.
Pedersen has not provided any firm timetable.
The committee’s roots are in a U.N. Security Council resolution in December 2015 that called for a Syrian-led political process facilitated by the United Nations that “establishes credible, inclusive and non-sectarian governance and sets a schedule and process for drafting a new constitution.”

The committee is expected to “prepare and draft for popular approval” a constitutional reform as part of efforts to reach a political settlement in Syria. Their work is to be based in part on “Twelve Living Intra-Syrian Essential Principles” agreed on under U.N. auspices in 2017 and take into account Syria’s 2012 constitution.

For now, Damascus has referred to the talks as merely “about” Syria’s tattered constitution. Many others want it revised or scrapped. Decisions are to be made by at least a majority of 75%, to prevent any one group from exercising outsize control.

The committee’s co-chairs are government delegation chief Ahmad Kuzbari, a lawmaker in the Syrian parliament, and opposition delegation leader Hadi Bahra, a top official of the Syrian National Committee.
Kuzbari is a lesser known figure than the Syrian ambassador to the United Nations, Bashar al-Ja’afari, who for many months led Syria’s official delegation to U.N.-led talks in Geneva that went nowhere.
Bahra is a senior member of the Syrian opposition and headed the Syrian National Coalition opposition group until 2015. He is believed to be close to the Saudis.
Pedersen says the civil society envoys represent a “diverse and broad pool of 50 individuals of importance in Syrian society” — but are not formal members of a party. They include activists, experts and other independents, from inside and outside of Syria, and come from the country’s varying religious and ethnic backgrounds.
About 30% are women.
The talks do not include extremists like the so-called Islamic State group or al-Qaida’s affiliate in Syria, or Kurdish fighters who until recently controlled a large chunk of northeastern Syria.

The Stakes for Syria

The talks on the constitution are really just an entree for the broader question: How can Syria’s war end?

The Stakes for the International Community

While the U.N. insist this is a “Syrian-led” process, many world governments are paying close attention.
The foreign ministers of Iran, Russia and Turkey — who have been working together as part of the so-called Astana group parallel with the U.N. to help end Syria’s civil war — turned up in Geneva on Tuesday to lend moral support.
But continued fighting sets an uncomfortable backdrop, notably in rebel-held Idlib Province this year.


Related Story: In 6 Charts, See What Americans Really Think About US Policy Toward Syria, ...

U.S. special envoy for Syria Joel Rayburn alluded to the “very dangerous situation” in northeastern Syria, where Turkish forces have moved into formerly Kurdish-held areas.
“It’s in stark contrast to the opportunity for a peaceful path out of the conflict that’s opening here in Geneva this week,” Rayburn told reporters in Geneva on Tuesday.