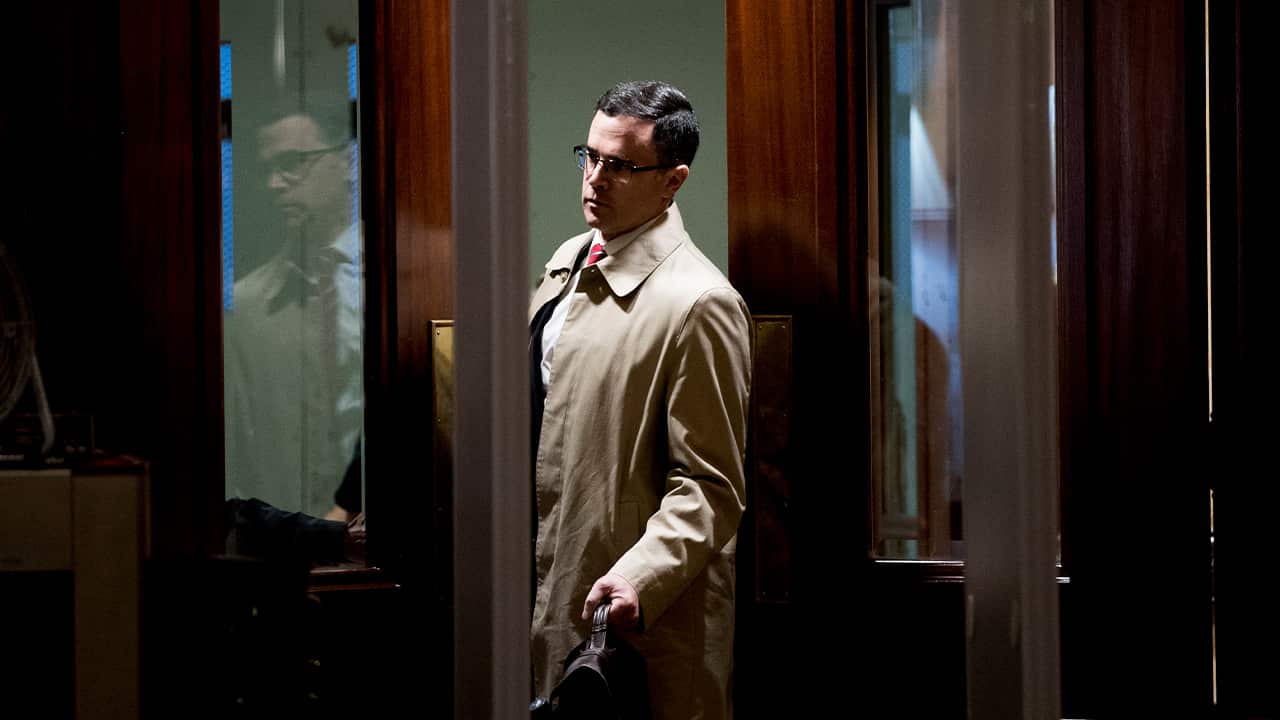 WASHINGTON — A former top White House official confirmed Thursday that military aid to Ukraine was held up by President Donald Trump’s demand for the ally to investigate Democrats and Joe Biden, but he testified he saw nothing illegal about the quid pro quo at the center of the Democrat-led impeachment inquiry.
Tim Morrison, who stepped down from the National Security Council the day before testifying, was the first White House political appointee to appear and spent more than eight hours behind closed doors with House investigators.

Morrison Was Among Those Listening to Trump’s July 25 Call

A defense hawk, Morrison was the National Security Council’s top adviser for Russian and European affairs until he stepped down Wednesday. He was brought into the White House by John Bolton, the former national security adviser who was critical of Trump’s Ukraine policy and the back-channel diplomacy being run by the president’s personal lawyer, Rudy Giuliani.
Morrison testified that he was told by his predecessor, Fiona Hill, who also testified in the impeachment inquiry, that Giuliani and Sondland were trying to get Ukraine President Voldymyr Zelenskiy “to reopen investigations into Burisma,” he wrote.
Bolton resigned in September, and Morrison had similarly been expected to leave for some time. “I do not want anyone to think there is a connection between my testimony today and my pending departure,” he wrote.
As a national security adviser, Morrison was among those listening to Trump’s July 25 call with the Ukrainian leader that sparked a whistleblower’s complaint and the impeachment inquiry.
He said he asked NSC lawyers to review the call because he had three concerns if word of the discussion leaked: how it would play out in polarized Washington, how it would affect bipartisan support in Congress for Ukraine and how it would impact U.S.-Ukraine relations.
Republican lawmakers portrayed the opening remarks of the longtime GOP policy operative as shifting the debate favorably toward Trump.
They said Morrison’s opening statement contradicted another key witness, Lt. Col. Alexander Vindman, the Army officer who handled Ukraine issues at the National Security Council. Vindman testified Tuesday that he twice sounded the alarm over the Trump administration actions.

“It’s a very compelling witness today that is giving testimony that contradicts some of the testimony we heard from Mr. Vindman,” said Rep. Mark Meadows, R-N.C.
Another Republican, Rep. Chip Roy of Texas, said, “When you all see what he had to say, it will be interesting.”


“It’s a very compelling witness today that is giving testimony that contradicts some of the testimony we heard from Mr. Vindman.” — Rep. Mark Meadows
Morrison has been featured prominently in previous testimony from Taylor, the top diplomat in Ukraine who testified before House investigators last week.
It was Morrison who first alerted Taylor to concerns over Trump’s phone call with Ukrainian President Volodymyr Zelenskiy.
In fact, Morrison’s name appeared more than a dozen times in testimony by Taylor, who told impeachment investigators that Trump was withholding military aid unless Zelenskiy went public with a promise to investigate Biden and Burisma, where Biden’s son served on the board.
Taylor’s testimony contradicted Trump’s repeated denials that there was any quid pro quo.
Morrison testified Thursday that he initially knew so little about Bursima that he had to do a Google search, but quickly understood the Biden connection.
He did clarify one difference from Taylor’s recollection of events: He said it was his understanding that “it could be sufficient” if the new Ukraine attorney general, rather than Zelenskiy himself, committed “to pursue the Burisma investigation.”

The Spotlight Has Been on Morrison Since August

As the security funds for Ukraine were being withheld, Morrison told the diplomat, “President doesn’t want to provide any assistance at all.”
Their concerns deepened when Morrison relayed on Sept. 7 the conversation he had with Sondland that gave him that “sinking feeling.”
In it, Sondland explained that Trump said he was not asking for a quid pro quo but insisted that Zelenskiy “go to a microphone and say he is opening investigations of Biden and 2016 election interference,” Taylor testified last week.
Morrison told Bolton and the NSC lawyers of this call between Trump and Sondland, according to Taylor’s testimony.
The spotlight has been on Morrison since August, when a government whistleblower said multiple U.S. officials had said Trump was “using the power of his office to solicit interference from a foreign country in the 2020 U.S. election.”
Morrison was brought on board to address arms control matters at the White House and later shifted into a role as a top Russia and Europe adviser. It was then that he stepped into the thick of an in-house squabble over Giuliani’s role.
The impeachment probe has been denounced by the Republican president, who has directed his staff not to testify.
Morrison, formerly a longtime Republican staffer at the House Armed Services Committee, has been bouncing around Washington in Republican positions for two decades. He worked for Rep. Mark Kennedy, R-Minn., Sen. Jon Kyl, R-Ariz., and as a GOP senior staffer on the House Armed Services Committee, including nearly four years when it was chaired by Rep. Mac Thornberry, R-Texas.
Bolton brought Morrison into the NSC in July 2018 as senior director for weapons of mass destruction and biodefence.

Mayors for Pete: Buttigieg Hunts for Support in City Halls