It’s hard to define the Blue Man Group in words. And, it’s not just because it is a non-verbal entertainment show.

For 27 years, the silent trio of blue men play drums, engage with the audience, and make a point without saying a word.

At any given time, there are about 45 Blue Men performing in shows around the world, three per show whether it is New York, Las Vegas, or the current U.S. tour. The traveling troupe of Blue Men returns to Fresno for the first time in eight years, with two shows at the Saroyan Theatre Nov. 6-7, appropriately titled “Speechless.”

The Man Behind a Blue Man

Steven Wendt is one of the Blue Men performing in Fresno. The Kansas City, Missouri, native chose a career in theater and puppetry. Other actors encouraged him to try out for the Blue Man Group. He did, and has been donning the blue makeup for the last seven years. 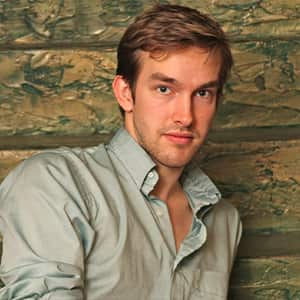 Steven Wendt when he’s not performing with the Blue Man Group.

During his audition in Los Angeles, Wendt had to demonstrate his drumming, acting, and improvisational skills.

This won’t be his first visit to Fresno. Wendt says he has friends in town, and looks forward to seeing them.

He spoke with GV Wire, taking a break from a tour stop in Cheyenne, Wyoming, about what to expect when the Blue Men come to Fresno.

GV Wire: What does it take to be a Blue Man?

Wendt: There are people who never studied acting who are Blue Men. They’re people who came from a music background that are Blue Men. We have a diverse group of people from all sorts of backgrounds. Really, there are different ways to become a Blue Man, you just have to audition, so that they know you’re out there.

What is the process for getting into costume?

Wendt: That process is getting rid of any qualities of me that aren’t Blue Man. That’s the transformation, because it’s still me. My Blue Man is very different than Mike Brown’s Blue Man or other guys on tour. We wear a bald cap, like a swim cap, glued to our head and then we take blue oil makeup and put it all over our whole head. It’s not actually a mask. But, it’s like wearing a mask because it completely transforms (you). (The paint color is) actually called Blue Man Special.

What can fans in Fresno expect from the Speechless tour?

Wendt: The coolest thing about this tour is that Blue Man has not put out this much new content in probably 15 years. … If people have seen Blue Man before, this is all new material. So, this is a brand new show basically for them. … We only have two pieces (remaining from prior shows) that we drum on — gumballs and marshmallows.

The entire set is integrated with the light, sound, and video, and are triggered off of each other. So, it allows us to improvise. That allows us to use things from the audience. We actually sampled the audience and played music with the sounds from people in the audience. The show can evolve differently every night. The show has a lot of freedom.

What is Blue Man Group’s place in American pop culture?

Wendt: It is world-renown. Everybody knows about it, but it’s pretty remarkable that a show like this has endured. I think that is a testament to the quality of the work and the fact that it can change and evolve with current pop culture and art. So, it kind of stays abreast of those changes in our society. And it’s always been like a commentary on art and culture within the show. Without really saying much about it, it’s just kind of a mirror, a distorted mirror, look at culture.

Do you ever have a chance to enjoy the city where you are performing?

Wendt: We get to walk around, enjoy things. The one thing about being on tour is that we are looking for a late breakfast everywhere, and late dinner because we get out of the show as late as 10:30, and some places aren’t open. Some towns shut down.

About Blue Man Group in Fresno

Tickets: Starting at $30 on Ticketmaster