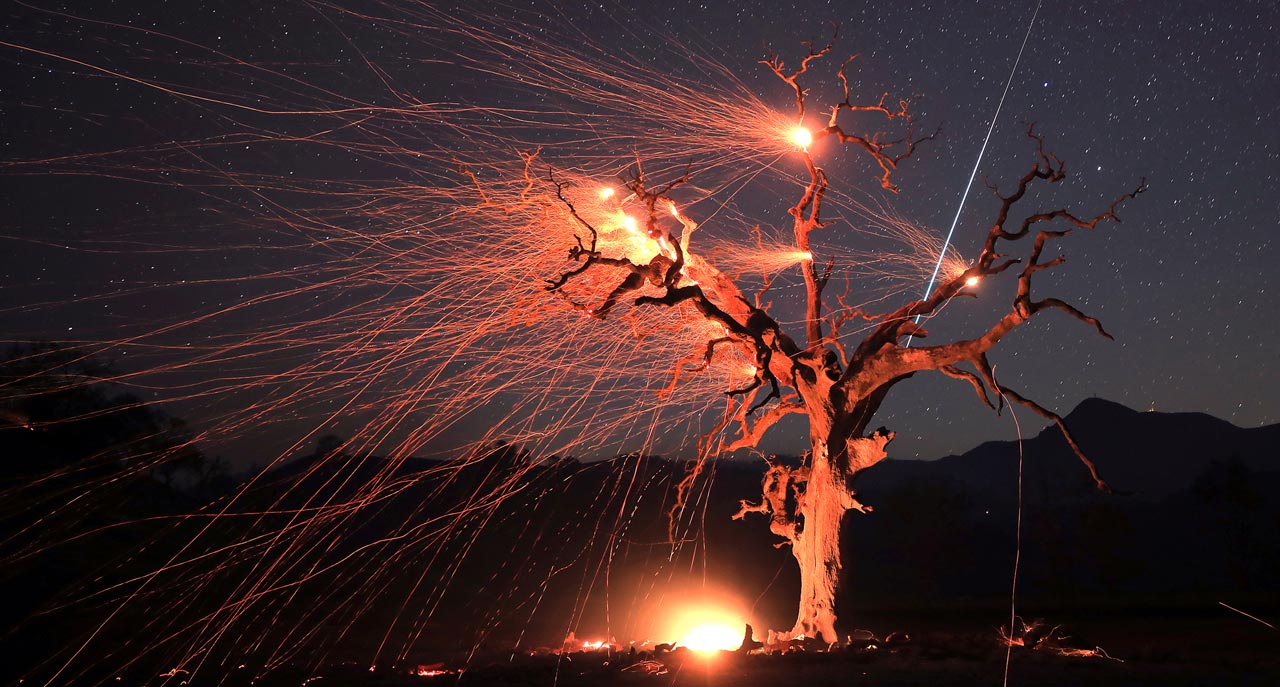 SIMI VALLEY — A new wildfire erupted Wednesday in wind-whipped Southern California, forcing the evacuation of the Ronald Reagan Presidential Library and nearby homes, as both ends of the state struggled with blazes, dangerously gusty weather and deliberate blackouts.
The brush fire broke out just before dawn in the Simi Valley area north of Los Angeles and grew to more than 400 acres, Ventura County officials said. They gave no immediate estimate of how many people were ordered to leave.
Aircraft dropped water and fire retardant on the blaze, and fire officials said the flames were being pushed away from the library by strong Santa Ana winds blowing from inland toward the coast.

Library spokeswoman Melissa Giller said the hilltop museum was safe. She said hundreds of goats are brought in each year to eat away vegetation that could fuel wildfires on the 300-acre grounds.
Meanwhile, frustration and anger mounted across Northern California as Pacific Gas & Electric Co., the state’s largest utility, undertook its third round of sweeping blackouts in a week, hoping to prevent its electrical equipment from toppling or coming into contact with branches and sparking fires.
PG&E said Tuesday’s power shut-offs would affect about 1.5 million people in some 30 counties including the Sierra foothills, wine country and San Francisco Bay Area. They included 1 million still without power from a blackout over the weekend.

No Electricity for Four Days

Across the darkened neighborhoods, people worried about charging cellphones and electric vehicles, finding gasoline and cash, staying warm and keeping their food from spoiling. Some ended up at centers set up by PG&E where people could go to power their electronics and get free water, snacks, flashlights and solar lanterns.
With no electricity for the fourth straight day, chef and caterer Jane Sykes realized she would have to throw out $1,000 worth of food, including trays of brownies, cupcakes and puff pastry. She also had little hope of getting a good night’s sleep — there was no way to run the machine she relies on to counter her apnea.
“I don’t think PG&E really thought this through,” she lamented.
PG&E officials said they understood the hardships caused by the blackouts but insisted they were necessary.
In wine country north of San Francisco, fire officials reported progress in their battle against a 120-square-mile (310-square-kilometer) blaze in Sonoma County, saying it was 30% contained.

The fire destroyed at least 206 structures, including 94 homes, and threatened 90,000 more, most of them homes, authorities said. More than 150,000 people were under evacuation orders.
Winds topped out at 70 mph north of San Francisco Bay and began to ease early Wednesday, but forecasters said the fire danger would remain high because of continuing breezes and dry air.
In Southern California, where fire crews were trying to snuff out a wildfire in the celebrity-studded hills of Los Angeles that destroyed a dozen homes on Monday, Santa Ana winds topped 50 mph in some areas before dawn. About 9,000 people, including Arnold Schwarzenegger and LeBron James, were under evacuation orders.
That fire was caused when a dry branch from a eucalyptus tree was flung 30 feet (9 meters) by high winds into a city Department of Water and Power line and caused sparks, authorities said.
Mayor Eric Garcetti called it an “act of God.” The city had cut away brush and trees from around the line, officials said.

The National Weather Service issued an extreme red flag warning for high winds for much of Southern California through Thursday evening, with some gusts expected to reach 80 mph. It could be the strongest bout of winds in years.
No deaths have been reported from the fires, but toppled trees claimed three lives.
Gov. Gavin Newsom and top utility regulators have accused PG&E of mismanaging its power system and failing for decades to make the investments needed to ensure it is more durable.
PG&E President Bill Johnson said he talked to the governor and agreed to give customers affected by an Oct. 9 blackout a one-time credit on their bills, but he did not say how much.