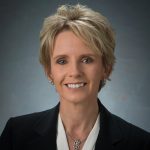 Johnston and other district officials gathered at Pinedale to brief news reporters about the proposed bond measure and its impacts.

One impact of not passing the bond measure would be bigger enrollments at Clovis East High School, redrawn boundary lines across the entire district, and the unwelcome possibility of year-round school schedules, Superintendent Eimear O’Farrell said.

Most District Growth In Southeast

With the bond’s passage, the district would focus boundary line changes on the southeast area where there are plans to build a new intermediate and high school near the Clinton Avenue alignment between Highland and Leonard avenues. The $250 million Bradley Educational Center project is in a neighborhood that’s now part of the Clovis East boundary area and where the district is seeing the biggest growth.

Another elementary school is in the works, but its location has yet to be determined, O’Farrell said.

O’Farrell and other district officials emphasized that there will be money in the bond measure for projects at each of the district’s 50 schools, of which 30 are more than 25 years old.

Clovis Unified officials said they launched the bond measure education campaign at Pinedale because it’s an example of how one of the district’s older schools — Pinedale opened in 1952 — has benefited from prior bond measures. Measure A helped build the Phillip V. Sanchez multipurpose room and a new kindergarten wing, upgraded many classrooms with improved lighting, heating, and air-conditioning systems, and added modern classroom features such as ceiling-mounted projectors.

The state has a $15 billion bond measure on the March ballot that contains $9 billion for K-12 schools. Clovis Unified hopes to get another $200 million in future state school facilities funds, but the district would need to have local funds — such as from a bond measure — to obtain the state money, Johnston said.