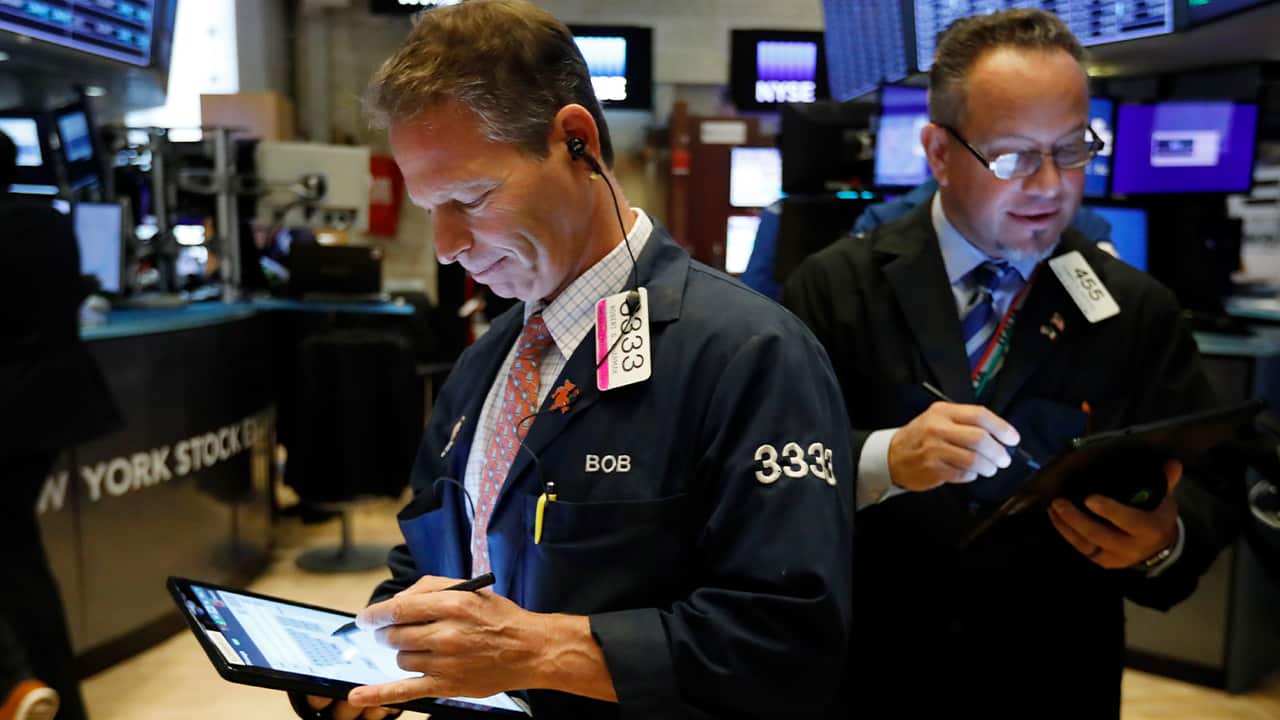 NEW YORK — U.S. stock indexes slinked higher Tuesday, and the S&P 500 added to its record after stronger-than-expected profit reports from drugmakers pushed health care stocks to big gains.
The reports from Pfizer and Merck highlighted a mixed set of earnings reports from big companies, including Google’s parent. Companies have largely been reporting stronger earnings than analysts expected, but they’re nowhere close to blow-away good. S&P 500 companies are still on track to report a third straight quarter of profit declines, according to FactSet.
What’s helped buoy the market in recent weeks are hopes that the United States and China can make progress on their trade dispute, or at least stop making it worse. Lower interest rates have also played a big role, and the Federal Reserve will wrap up a two-day meeting Wednesday on rate policy.
Most investors expect the Fed to cut short-term rates by a quarter of a percentage point to offer some protection from the trade war and the slowing global economy. If investors are right, it would be the third such cut since the summer.
Treasury yields dipped ahead of the decision, while global stock markets were mixed. The price of crude oil dropped a second straight day, and gold dipped lower.

KEEPING SCORE: The S&P 500 was up 0.2% as of 10:50 a.m. Eastern time after recovering from a drop of 0.2% earlier in the morning. It set a record on Tuesday, surpassing its prior peak set in late July.
The Dow Jones Industrial Average rose 61 points, or 0.2%, to 27,151, and the Nasdaq composite slipped 0.1%.
NOT BAD, BUT NOT GREAT: Nearly half of all the companies in the S&P 500 have told investors how much they earned from July through September, and the index is on pace to report a profit drop of 3.5% from the prior year, according to FactSet.
That’s not as bad as the roughly 4% decline that analysts were expecting on the eve of earnings reporting season, but it would be the first time that profits dropped for three straight quarters since 2015-2016.
Trade wars and the slowing global economy are hitting companies that do lots of business overseas, and analysts say the sharpest earnings declines will come from energy companies, raw-material producers and technology companies. Wall Street is expecting stronger growth, meanwhile, from companies that do most of their business domestically, such as utilities and real-estate companies.
Over the long term, stock prices tend to track the path of corporate profits.
HEALTHY RESULTS: Health care stocks had the biggest gains among the 11 sectors that make up the S&P 500 following better-than-expected reports from Pfizer and Merck.
Pfizer rose 2.8% after it raised its forecast for the year.
Merck gained 2.3% after reporting big jumps in sales for its top two blockbuster drugs, cancer drug Keytruda and vaccine Gardasil.
REVVED UP: General Motors climbed 5.4%. The workers’ strike that brought its U.S. factories to a standstill forced it to report a drop in profits, but the results were nevertheless better than Wall Street expected.

The Fed Has Cut Rates Twice Since the Summer

MIXED LETTERS: Google’s parent company, Alphabet, dropped 1.3% following its mixed earnings report. Revenue came in better than Wall Street’s expectations, but profit fell short.
RATE WATCH: The Fed has cut rates twice since the summer in hopes of shielding the United States from the effects of President Donald Trump’s trade wars and the slowing global economy.
It’s a sharp turnaround from late last year, when the Fed was raising rates and worrying investors that it was increasing them too much, too fast. Lower rates make borrowing cheaper for companies and households, which can stimulate the economy and also make stocks look more attractive relative to bonds.
Most investors expect a rate cut to come Wednesday, but they’re much less certain what will happen after that.
The yield on the 10-year Treasury dipped to 1.84% from 1.85% late Monday. The two-year yield, which is more sensitive to moves by the Fed, fell to 1.63% from 1.64%.
TRADE WATCH: The only issue more important than interest rates to markets in the short term is the U.S.-China trade battle, Jeffrey Halley of Oanda said in a commentary.
The two sides are continuing to talk, but uncertainty is high on what will come of it. China on Tuesday promised more improvements in conditions for foreign companies, which has been a key factor in the trade dispute. But it also separately accused the U.S. of “economic bullying behavior” after U.S. regulators cited security threats while proposing to slash funding for Chinese equipment in U.S. telecommunications networks.
OVERSEAS MARKETS: Britain’s FTSE 100 fell 0.6% as it became clear that the country will head to another general election to solve its political impasse over Brexit. Germany’s DAX was close to flat, and the CAC 40 in Paris was up 0.1%.
In Asia, Japan’s Nikkei 225 index gained 0.5%. The Hang Seng in Hong Kong lost 0.4%, and the Shanghai Composite index dropped 0.9%.
Hong Kong’s Chief Executive Carrie Lam said Tuesday that the city may fall into recession as it enters its fifth month of protests. Third quarter data are due for release on Thursday and if they show negative growth, then the semiautonomous Chinese territory’s economy will have entered a technical recession.