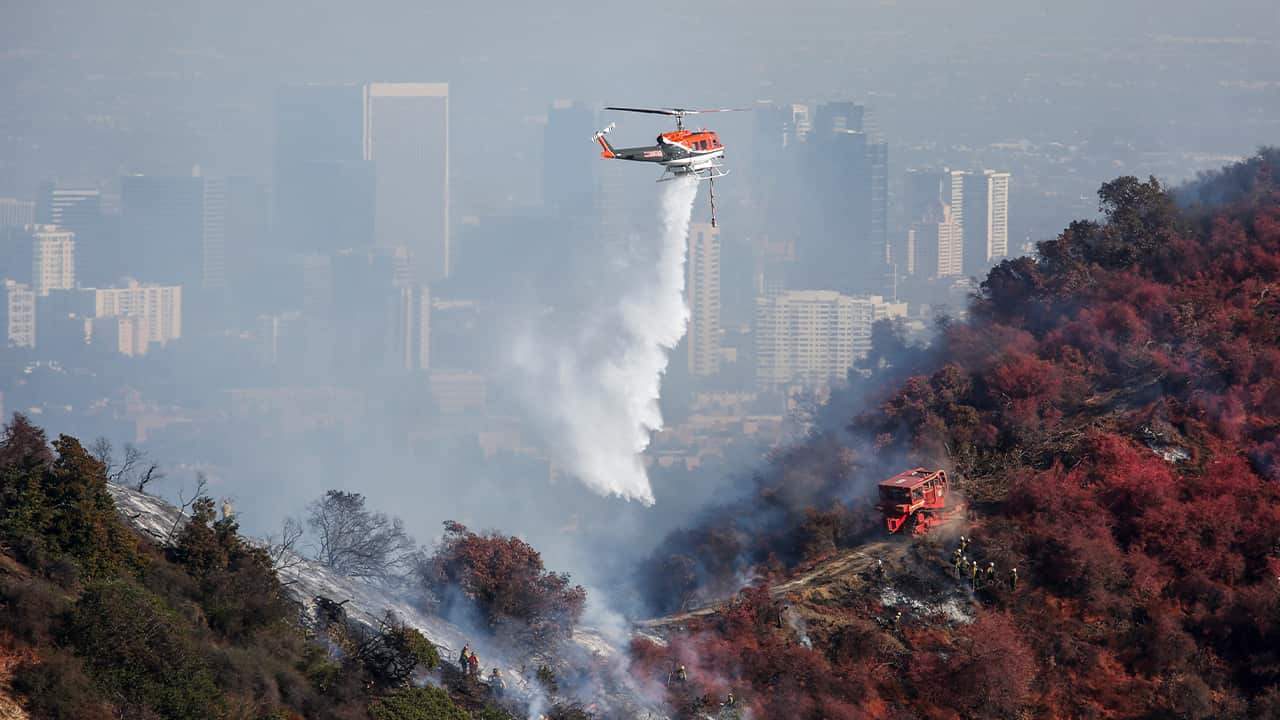 SANTA ROSA — Frustration and anger mounted across Northern California as Pacific Gas & Electric Corp. began another round of fire-prevention blackouts Tuesday that could leave millions of people without electricity, some for five days or longer.
The shut-offs, aimed at keeping windblown electrical equipment from sparking wildfires, came as fire crews raced to contain two major blazes in Northern and Southern California before the winds picked up again. The fires have destroyed dozens of homes in Los Angeles and in Sonoma County wine country.
PG&E said its latest blackout would affect nearly 600,000 customers in 29 counties, or about 1.5 million people. The announcement came even before the end of the last blackout, which shut off power to more than 2.5 million people over the weekend.


Related Story: Californians Are Angry at PG&E Over Blackouts — And They’re Not Sparing ...

People searched for places to charge cellphones and stocked up on ice after PG&E gave warning.
Petaluma resident Scotty Richardson, whose lights went out Saturday, said the prospect that power might not be restored for days makes him “furious, furious.”
He vented frustration at the on-again, off-again outages over the past few weeks but also anger at the utility’s role in causing deadly fires in the past, and apparently sparking some of this season’s blazes.

Many Californians Are Skeptical of PG&E’s Motives

“PG&E can’t figure out how to deliver power reliably without killing people,” he said. “This is more than three strikes — it’s a failure of epic proportions.” Ashley LaFranchi examines the remains of her family’s Oak Ridge Angus ranch, leveled by the Kincade Fire, in Calistoga, Calif., on Monday, Oct. 28, 2019. According to Cal Fire, the blaze has scored more than 66,000 acres and destroyed at least 96 structures. (AP Photo/Noah Berger)

PG&E said Monday its power lines may have also started two smaller wildfires over the weekend in a part of the San Francisco Bay Area where the utility had kept the lights on because it was not designated a high fire risk.
In Lafayette, near San Francisco, where many people lost power on Saturday, people criticized PG&E for poorly communicating about the shutoffs.

The California Public Utilities Commission plans to open an investigation into the blackouts that could result in fines against PG&E if it is found to have broken any rules.
The commission said it also plans to review the rules governing blackouts, will look to prevent utilities from charging customers when the power is off and will convene experts to find grid improvements that might lessen shut-offs next fire season.
The state can’t continue experiencing such widespread blackouts, “nor should Californians be subject to the poor execution that PG&E in particular has exhibited,” PUC President Marybel Batjer said in a statement.
PG&E has set up centers where people can go to charge phones and laptops and get free water, snacks, flashlights and solar lanterns.
At one of them, in Berkeley, a few dozen people sat around charging their phones, comparing outage stories and seeking information.
Cellphone coverage in parts of Berkeley was very spotty during the outage, and residents said they heard it was because cellphone towers didn’t have backup power.
“It’s like, really? Nobody thought of that?” said Alexandra Cons, who lost her house in a deadly 1991 fire that raged through the Berkeley hills.