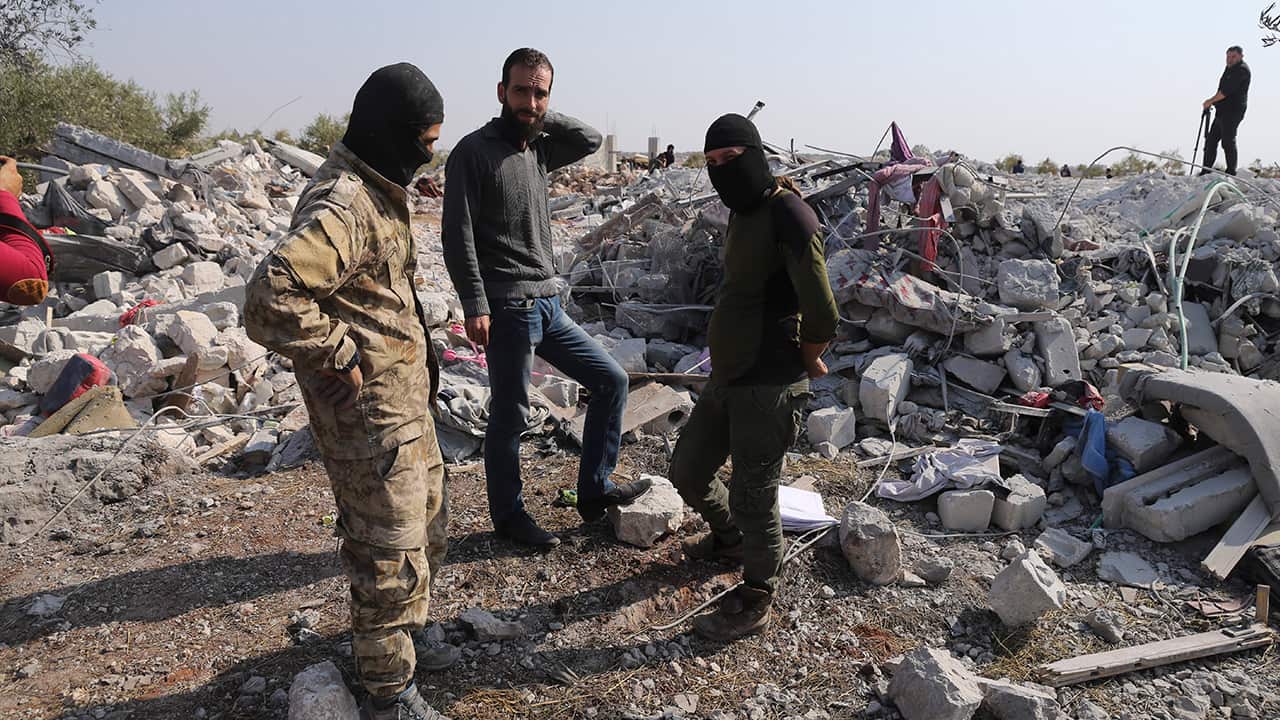 BEIRUT — Syrian Kurdish forces said Monday they are increasing security at prisons and detention facilities holding tens of thousands of Islamic State militants and supporters, including foreigners, following the death of the extremist group’s leader in a U.S. military raid.
The heightened security also comes as Kurdish forces said they are continuing operations to hunt down IS leaders in Syria. Hours after the raid that killed Abu Bakr al-Baghdadi in northwestern Syria, another attack based on Kurdish intelligence killed one of his aides and possible successors, Kurdish forces said.
If confirmed, the death of Abu Hassan al-Muhajir would be another blow to IS. U.S. officials had no immediate comment.
Forces from the Kurdish-led internal security agency were “on high alert” after al-Baghdadi’s death in anticipation of possible riots or attacks on the prisons and camps for displaced people in northeastern Syria where IS members or supporters are located, an official with the agency said.
One of the camps is home to 70,000 people, most of them relatives of the extremists. More than 10,000 prisoners, including 2,000 foreigners, are held in detention facilities in northeastern Syria.
Fear of chaos already was running high over the fate of those detained after this month’s Turkish military invasion of northeastern Syria, which ushered in major troop changes in the area. Turkey moved troops into areas along the border, while Syrian border guards were deployed in others.

al-Baghdadi’s Death Leaves IS Without an Obvious Leader

Kurdish officials had said they needed to divert fighters and logistics to the front line to ward off the Turkish offensive. A shaky cease-fire is in place and an agreement to redeploy Kurdish forces away from the borders. FILE – This file image made from video posted on a militant website April 29, 2019, purports to show the leader of the Islamic State group, Abu Bakr al-Baghdadi, being interviewed by his group’s Al-Furqan media outlet. The IS erupted from the chaos of Syria and Iraq’s conflicts and swiftly did what no Islamic militant group had done before, conquering a giant stretch of territory and declaring itself a “caliphate.” U.S. officials said late Saturday, Oct. 26, 2019 that al-Baghdadi was the target of an American raid in Syria and may have died in an explosion. (Al-Furqan media via AP, File)

A Milestone in the Fight Against IS

The U.S. raid that killed al-Baghdadi, the shadowy leader of IS who presided over its global jihad and became one of the world’s most-wanted terrorists, took place just before midnight Saturday in Syria’s Idlib province.
It was a milestone in the fight against IS, which brutalized thousands of people in Syria and Iraq and sought to direct a global campaign from a self-declared “caliphate.” A military campaign by U.S. and allied forces led to the recapture of the territory the group held, but its violent ideology has continued to inspire attacks.


“More (IS figures) remain hiding in the area.” — Syrian Kurdish forces spokesman Mustafa Bali
Syrian Kurdish forces spokesman Mustafa Bali said his fighters believe al-Muhajir was in Jarablus to facilitate al-Baghdadi’s travel to the area, which is administered by Turkey-backed fighters.
“More (IS figures) remain hiding in the area,” Bali said Sunday.
Little is known about al-Muhajir, who assumed the role of a spokesman after his predecessor was killed in a 2016 airstrike. Al-Muhajir is a nom-de-guerre that indicates he is a foreigner, and he also was believed to be a possible successor to al-Baghdadi.
Trump’s decision to pull back U.S. troops from northeastern Syria raised a storm of bipartisan criticism in Washington, including statements that the move could help IS regain strength after its territorial losses. It also was viewed as an abandonment of the only U.S. ally in Syria, the Kurdish-led forces, who fought IS for years with the U.S-led coalition.
Trump said the troop pullout “had nothing to do with this,” and said Kurdish forces were among the many sides cooperating in the al-Baghdadi operation. Both Iraqi and Kurdish officials claimed a role, and the Turkish military also tweeted that prior to the operation, it exchanged information and coordinated with U.S. military.