LONDON — All 39 people found dead in a refrigerated container truck near an English port were Chinese citizens, British police confirmed Thursday as they investigated one of the country’s deadliest cases of people smuggling.

The Essex Police force said 31 men and eight women were found dead in the truck early Wednesday at an industrial park in Grays, a town 25 miles east of London.

“This is an incredibly sensitive and high-profile investigation, and we are working swiftly to gather as full a picture as possible as to how these people lost their lives.” — Pippa Mills, deputy chief of Essex Police

A magistrate gave detectives another 24 hours to question the driver, a 25-year-old man from Northern Ireland who has been arrested on suspicion of attempted murder. He has not been charged, and police have not released his name.

Police in Northern Ireland searched three properties there as detective sought to piece together how the truck’s cab, its container and the victims came together on such a deadly journey.

Pippa Mills, deputy chief of Essex Police, said the process of conducting post-mortem examinations and identifying the victims would be “lengthy and complex.”

“This is an incredibly sensitive and high-profile investigation, and we are working swiftly to gather as full a picture as possible as to how these people lost their lives,” she said.

Police believe the truck and container took separate journeys before ending up at the industrial park. They say the container traveled by ferry from the Belgian port of Zeebrugge to Purfleet, England, where it arrived early Wednesday and was picked up by the truck driver and driven the few miles to Grays.

The truck cab, which is registered in Bulgaria to a company owned by an Irish woman, is believed to have traveled from Northern Ireland to Dublin, where it caught a ferry to Wales, then drove across Britain to pick up the container.

The Chinese Foreign Ministry said Chinese Embassy employees in the U.K. were driving to the scene of the crime to aid the investigation and Belgian police were trying to track down information from Zeebrugge.

Groups of migrants have repeatedly landed on English shores using small boats to make the risky Channel crossing, and migrants are sometimes found in the back of cars and trucks that disembark from the massive ferries that link France and England. But Wednesday’s macabre find in an industrial park was a reminder that criminal gangs are still profiting from large-scale trafficking.

The tragedy recalls the deaths of 58 Chinese migrants who suffocated in a truck in Dover, England, in 2000 after a perilous, months-long journey from China’s southern Fujian province. They were found stowed away with a cargo of tomatoes after a ferry ride from Zeebrugge, the same Belgian port that featured in the latest tragedy.

In February 2004, 21 Chinese migrants — also from Fujian — who were working as cockle-pickers in Britain drowned when they were caught by treacherous tides in Morecambe Bay in northwest England.

British Prime Minister Boris Johnson vowed in Parliament on Wednesday that people smugglers would be prosecuted to the full extent of the law. Britain, with its high demand for tourism, restaurant and agricultural workers, remains a very attractive destination for immigrants from all countries, even as the U.K. is rethinking its immigration rules as it prepares to leave the 28-nation European Union. 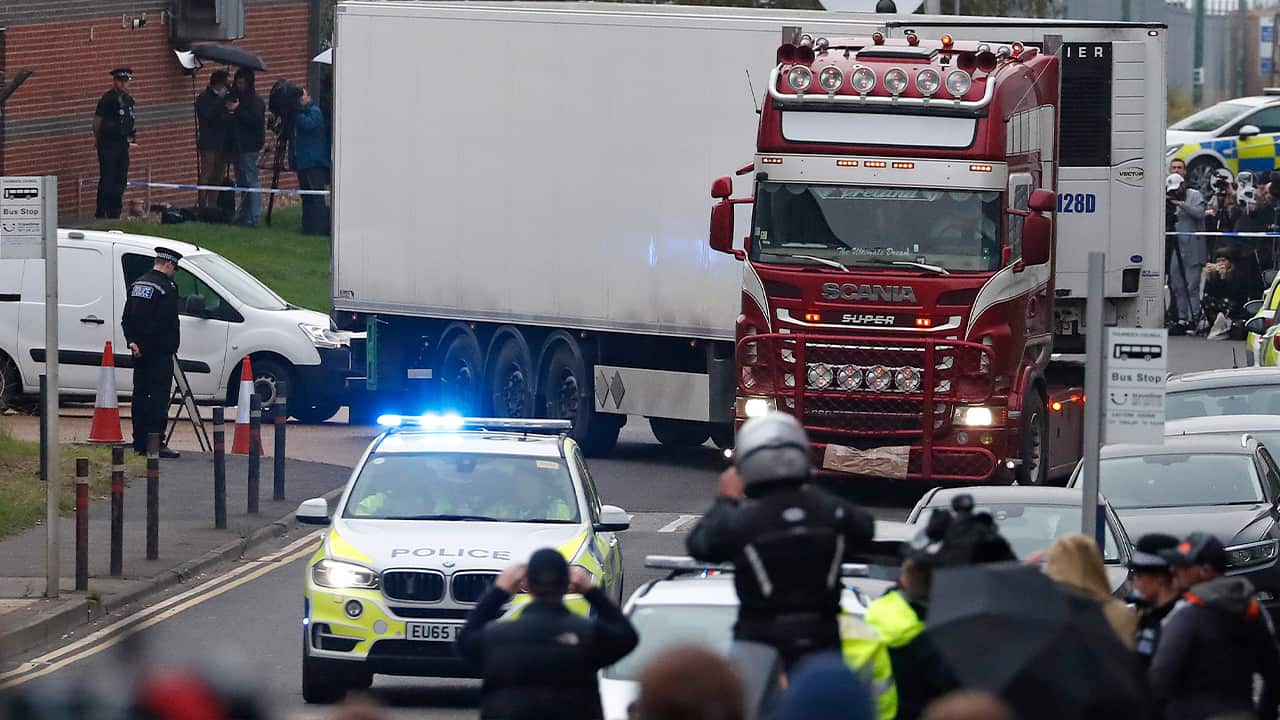 Police escort the truck, that was found to contain a large number of dead bodies, as they move it from an industrial estate in Thurrock, south England, Wednesday Oct. 23, 2019. Police in southeastern England said that 39 people were found dead Wednesday inside a truck container believed to have come from Bulgaria. (AP Photo/Alastair Grant)

U.K. Authorities Have Warned That People Smugglers Are Turning to Dutch and Belgian Ports

Nando Sigona, a professor of migration studies at the University of Birmingham, said tougher migration controls born of populist anti-immigrant sentiment across Europe were closing down less dangerous routes to the West, which has encouraged smugglers to take more risks and try out new routes.

“The fact that all these people came from the same country could hint to a more organized crime scenario. Usually, if it’s an ad hoc arrangement at the port, you would get a bit of a mix of nationalities.” — Nando Sigona, a professor of migration studies at the University of Birmingham

“The fact that all these people came from the same country could hint to a more organized crime scenario,” he told The Associated Press. “Usually, if it’s an ad hoc arrangement at the port, you would get a bit of a mix of nationalities.”

He said smugglers can earn more by packing as many people as possible into a ship or truck.

“Death is a side effect,” he said.

Sigona, who has studied Chinese immigrants to the U.K., said China’s rising middle class has more access to multiple routes to come to the West legally — say, with student or tourist visas. This means that the West is now closer to the public imagination in China, and could prompt those with fewer resources to put themselves and their families into debt in hopes of reaping similar rewards.

U.K. authorities have warned for several years that people smugglers are turning to Dutch and Belgian ports because of increased security measures on the busiest cross-Channel trade route between the ports of Calais in France and Dover in England.

Britain’s National Crime Agency warned in 2016 that people smuggling using containers on ferries was “the highest-priority organized immigration crime threat.” The same year, the U.K. Border Force identified Zeebrugge and the Hook of Holland in the Netherlands as key launching points for smuggling people into Britain.

Belgian authorities said they had not made much headway in finding out how the container ended up in Zeebrugge.

“Up till now, we have a lot of questions and not a lot of answers. We don’t even know which road was followed by the truck in Belgium,” said Eric Van Duyse, spokesman for the Belgian prosecutor’s office. “We don’t know how much time it stayed in Belgian territory. We don’t know if it stopped or not.”