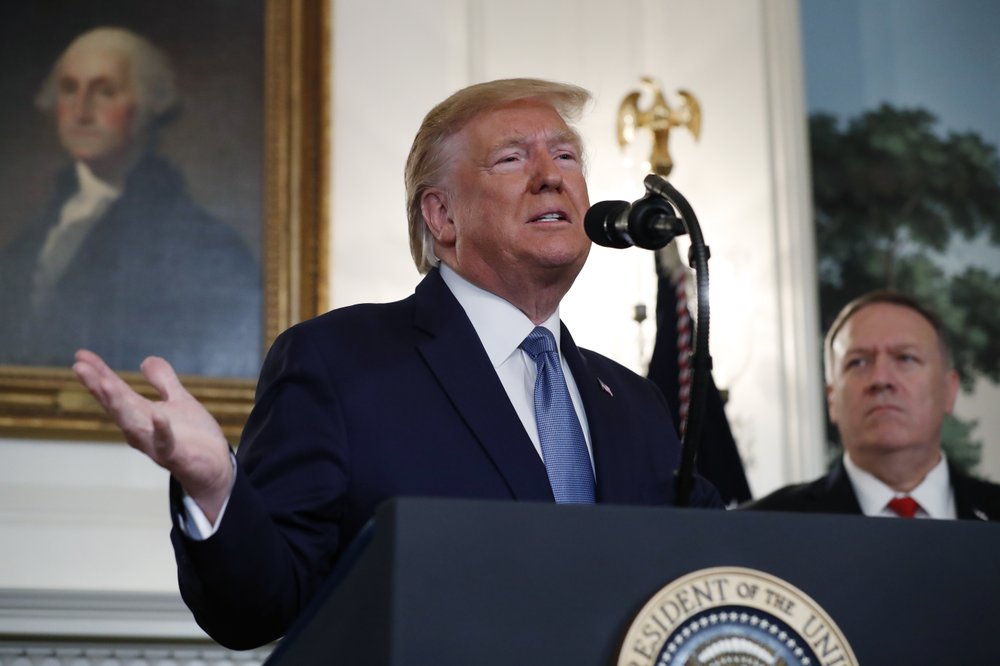 WASHINGTON — President Donald Trump said Wednesday he will lift sanctions on Turkey after the NATO ally agreed to permanently stop fighting Kurdish forces in Syria and he defended his decision to withdraw American troops.

“We’re getting out,” Trump said at the White House, asserting that tens of thousands of Kurdish lives were saved as the result of his actions.

“We’re getting out. Let someone else fight over this long, blood-stained sand.” — President Donald Trump

“Let someone else fight over this long, blood-stained sand,” he said.

The president, who campaigned on a promise to cease American involvement in “endless wars,” took a victory lap as he lopped the American presence inside Syria in less than a year from about 2,000 troops to a contingency force in southern Syria of 200 to 300.

Lawmakers on both sides of aisle chastised the president for turning on the Syrian Kurds, whose fighters battled side by side with American troops to beat back the Islamic State group They also questioned whether the move has opened up the region to a resurgence of IS.

Trump Halted Negotiations on a $100 Billion Trade Deal With Turkey

“I am worried that a full withdrawal will create space for ISIS to regroup, grow and gain more strength,” said Michael McCaul of Texas, the lead Republican on the House Foreign Affairs Committee. “We learned from President Obama’s reckless retreat from Iraq that power vacuums are exploited by America’s worst enemies. We do not want to repeat the same mistake. We must learn from history.”

Trump warned that if Turkey does not honor its pledge for a permanent cease-fire, he will not hesitate to reimpose sanctions. Earlier this month, Trump halted negotiations on a $100 billion trade deal with Turkey, raised steel tariffs back up to 50% and imposed sanctions on three senior Turkish officials and Turkey’s defense and energy ministries.

“The job of our military is not to police the world,” Trump said. “Other nations must step up and do their fair share. Today’s breakthrough is a critical step in that direction.”

Trump earlier in October ordered the bulk of the approximately 1,000 U.S. troops in Syria to withdraw after Turkey’s president, Recep Tayipp Erdogan, told Trump in a phone call that Turkish forces were set to invade northeastern Syria. Turkey’s goal was to push back the U.S.-allied Kurdish fighters. Turkey views the Kurds as terrorists and an ever-present threat along its southern border with Syria.

The U.S. pullout was seen as an abandonment of Kurdish fighters, who have incurred thousands of casualties as they fought with U.S. forces against the Islamic State militants.

The U.S. troops left, but the conflict was not without repercussions.

More than 176,000 people have been displaced by the Turkish offensive and about 500 IS fighters gained freedom during the conflict.

Trump’s critics say he gave up American influence in the region and signaled to future allies that the United States is no longer a reliable partner. More than 176,000 people have been displaced by the Turkish offensive and about 500 IS fighters gained freedom during the conflict.

“There were a few that got out, a small number relatively speaking,” Trump said. “They’ve been largely recaptured.”

Turkey is taking control of areas of Syria that it captured in its invasion. Russian and Syrian forces are now overseeing the rest of the border region, leaving the United States with little influence in the region.

Trump said he would “bring our soldiers home” from Syria, but then recalibrated and his administration plans to shift more than 700 to western Iraq. Those troops, however, do not have permission to stay in Iraq permanently. Iraq’s defense minister, Najah al-Shammari, told The Associated Press that the U.S. troops will leave the country within four weeks.

Much of The Territory Will Be Handed Over to U.S. Rivals

Defense Secretary Mark Esper visited the Iraqi capital on Wednesday, a day after Russia and Turkey reached an agreement that would send their forces along nearly the entire northeastern border to fill the void left when U.S. forces left. Between 200 and 300 U.S. troops will remain at the southern Syrian outpost of Al-Tanf.

Under the new agreement, much of that territory would be handed over to U.S. rivals.

The biggest winners are Turkey and Russia. Turkey would get sole control over areas of the Syrian border captured in its invasion. Turkish, Russian and Syrian government forces would oversee the rest of the border region. America’s former U.S. allies, the Kurdish fighters, are hoping Russia and Syria will preserve some pieces of the Syrian Kurdish autonomy in the region.

“In the blink of an eye, President Trump has undone over five years of progress against the Islamic State,” said Senate Minority Leader Chuck Schumer, D-N.Y.