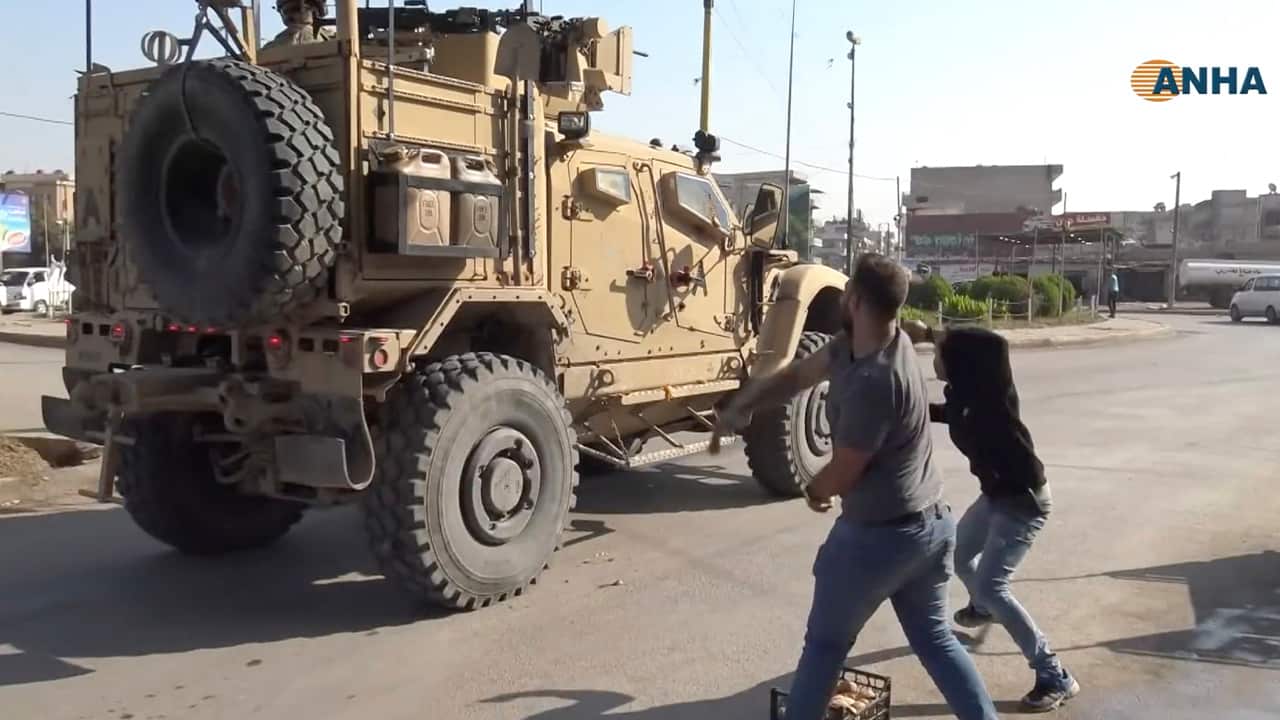 AKCAKALE, Turkey — Angry over the U.S. withdrawal, residents of a Kurdish-dominated Syrian city hurled potatoes at departing American military vehicles as they drove by on Monday. Defense Secretary Mark Esper said U.S. troops will stay in eastern Syria to protect Kurdish-held oil fields for at least the coming weeks and he was discussing options to keep them there.
“Like rats, America is running away,” one man shouted in Arabic at a convoy of armored vehicles flying American flags passing down an avenue in the northeastern city of Qamishli, according to video by the Kurdish news agency.
The video showed people pelting the vehicles with potatoes and shouting, “No America,” and “America liar,” in English.


Related Story: Trump’s Syria Actions Are the Result of a Knowledge-Free Foreign Policy

Another man shouted obscenities and talked of babies in Kurdish-held areas who have died in the Turkish offensive. One of the vehicles reversed down the street and over a sidewalk as several people walked after it, shaking their fists in the air and shouting insults.
The scene encapsulated the Kurds’ feelings of betrayal and added a new indignity to a U.S. withdrawal that has been rushed and saw several close brushes with Turkish-backed forces. The Kurds were stunned when President Donald Trump two weeks ago abruptly decided to pull U.S. troops out of border areas, abandoning their allied Kurdish-backed fighters ahead of Turkey’s invasion. After the assault began Oct. 9, Trump ordered a general withdrawal from Syria.
At another location, near the town of Tal Tamr, a group of protesters raised banners to departing U.S. troops late Sunday, according to an Associated Press video.

One man blocked the way of a U.S. van with a poster reading: “Thanks for US people, but Trump betrayed us.”
The Kurdish-led force was a key U.S. ally in the long and bloody fight that eventually brought down the Islamic State group’s rule over northeastern and eastern Syria. The U.S. troops near the border were seen by the Kurds as insurance that Turkey would not attack.


One man blocked the way of a U.S. van with a poster reading: “Thanks for US people, but Trump betrayed us.”
After being abandoned by U.S. forces, the Kurds agreed to a cease-fire deal brokered by Washington that requires them to leave a swath of territory along the border, handing it over to Turkish control.
Esper said he is discussing an option that would keep a small residual U.S. military force to secure oil fields in eastern Syria and continue the fight Islamic State militants.
Speaking during a visit to Afghanistan, he said he has not made a final decision on that option and has not yet presented it to Trump. He underscored the importance of protecting the oil fields from IS to ensure the militants don’t profit from them.
He said U.S. troops who are working with Kurdish-led forces to guard the oil fields are still in place. The withdrawal could take weeks, he said, and troops around the town of Kobani on the border with Turkey are the first leaving. Turkish soldiers stand at an outpost in the town of Akcakale, Sanliurfa province, southeastern Turkey, Monday, Oct. 21, 2019, overlooking the town of Tal Abyad, Syria, with Syria’s opposition flag flying from a pole in background right. Turkey’s President Recep Tayyip Erdogan is to meet Tuesday with Russian leader Vladimir Putin and the conflict between Turkey and the Kurds is expected to be the focus of the discussions. (AP Photo/Lefteris Pitarakis)

More Than 176,000 People Driven From Their Homes

As part of the cease-fire deal, Kurdish forces pulled back Sunday from the border town of Ras al-Ayn, paving the way for Turkish troops to be deployed there. Under the deal, the Kurds are to withdraw from a stretch of territory 75 miles along the border and 19 miles deep. Qamishli is east of that area.

Khalil said Turkey continues to violate the cease-fire, accusing its troops of shelling a village at dawn and seeking to carry out military operations. He criticized the U.S. as guarantor of the cease-fire deal, saying it has not forced Turkey to adhere to it.
“The American guarantor remains weak in its position in deterring the Turkish violations,” he said.
On Monday, Turkey Foreign Minister Mevlut Cavusoglu accused the Kurdish-led forces of 30 live fire violations of the 4-day-old truce, including an attack that killed one Turkish soldier. He said Turkey retaliated against these attacks.

Cavusoglu renewed warnings that his country will resume its offensive in northeastern Syria if Kurdish fighters don’t vacate the region before the cease-fire is set to end Tuesday evening.
“If they don’t withdraw, our operation will restart,” Cavusoglu said in Istanbul. He added, however, that Kurdish fighters were complying with the deal and withdrawing.
Turkey says it wants to return Syrian refugees to the evacuated areas. A meeting Tuesday between Turkish President Recep Tayyip Erdogan and Russian President Vladimir Putin is expected to further address arrangements along the Syria-Turkish border.

US Public Land Workers Getting Assaulted, Threatened on Job