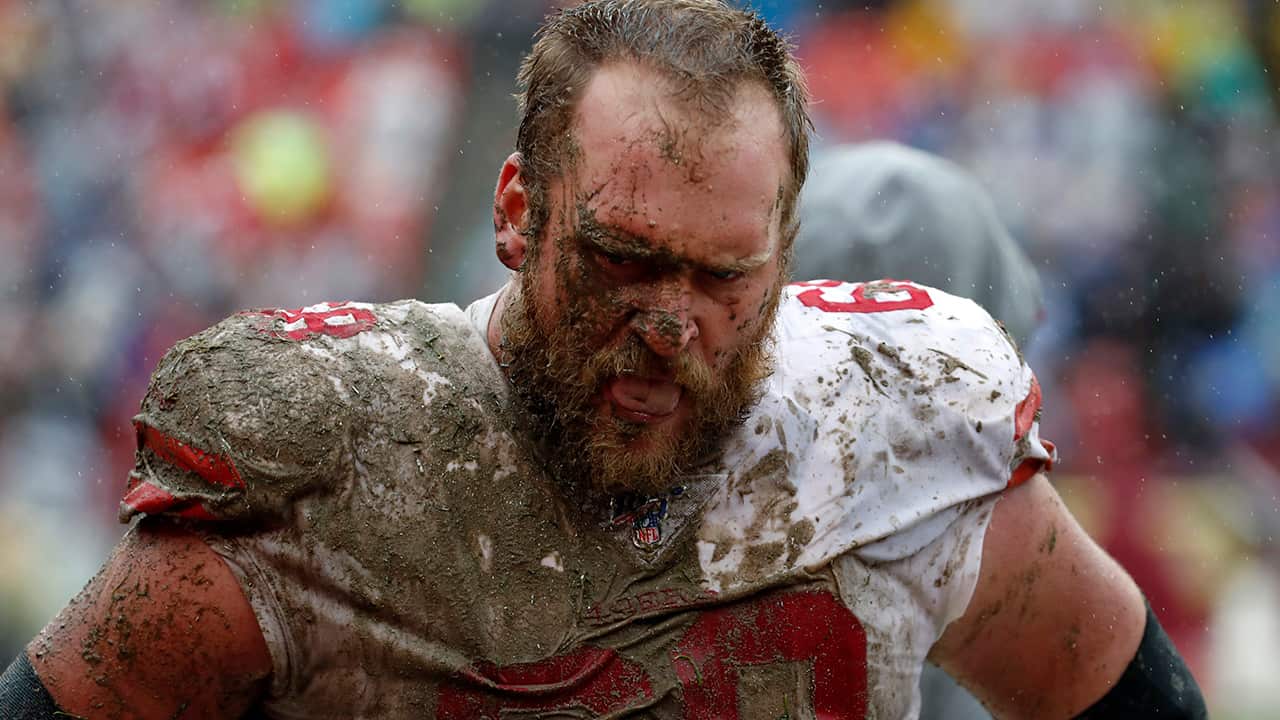 LANDOVER, Md. — Nick Bosa sacked Case Keenum to run out the clock, belly flopped onto the field and rode it like a Slip ‘N Slide.
“Slid way farther than I thought was going to slide,” he said.

The Weather Seemed a Perfect Fit

Robbie Gould made field goals from 28, 22 and 29 yards to provide the only offense of the game. Among those who braved the rain, more than half were 49ers fans — a trend that has haunted the Redskins this season. A “Let’s go Niners!” chant broke out in the fourth quarter among those in Jerry Rice, Ronnie Lott, Joe Montana and other jerseys from the organization’s storied past.
Linebacker Kwon Alexander, who forced Peterson’s fumble, said, “It definitely felt like a home game.”
The Redskins had alumni in town for their annual “Homecoming Weekend,” but lost their eighth in a row at FedEx Field.

Both offenses struggled mightily in a sloppy first half.
Washington took the opening drive and chewed up more than eight minutes on nine rushes and just one pass, but came up empty when Dustin Hopkins missed wide right from 39 yards. Peterson gained 57 yards on the ground for Washington but just 8 after the first drive.
Gould missed from 45 yards in the second quarter. For the half, the 49ers totaled 68 yards as Garoppolo finished 3 of 10 with 10 yards passing and were shut out in the game’s first 30 minutes for the first time this year.
It was the first 0-0 first half in the NFL since Week 17 in 2017 between the Cowboys and Eagles.

49ers: RB Matt Breida cleared concussion protocol and returned after being evaluated for an eye injury. … WR Marquise Goodwin was evaluated for a concussion in the first half but was held out. … Starting offensive tackles Joe Staley (leg) and Mike McGlinchey (knee) remained out.
Redskins: S Montae Nicholson was lost to a right ankle injury in the second quarter. Nicholson was carted off the sideline. … Played without injured CB Josh Norman (hand/thigh), RB Chris Thompson (toe) and TE Vernon Davis (concussion).

49ers: Look for the second 7-0 start in franchise history when they host the Carolina Panthers next Sunday.
Redskins: Visit former starting quarterback Kirk Cousins and the Minnesota Vikings on Thursday night.