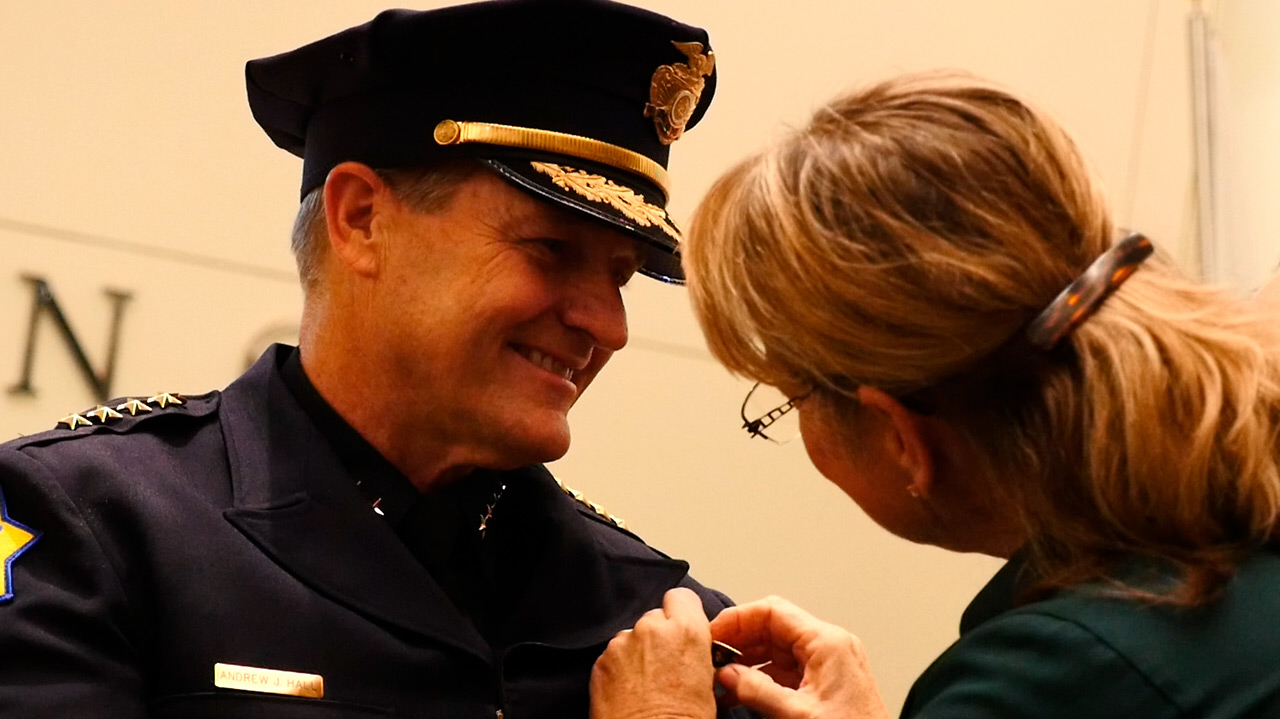 City Hall may have been the safest place to be Wednesday morning.
Dozens of police officers, from the prior chief down to the cadet, attended the swearing-in ceremony of new Chief Andy Hall.
With his oath, Hall received the chief’s badge, and four stars on each side of his collar, signifying his spot as the 22nd leader of the Fresno Police Department.
Hall succeeds Jerry Dyer, who officially retired after 18 years as chief and 40 years in the department.
Likewise, Hall is a 40-year veteran, making his way up the ladder as a cadet, officer, sergeant, lieutenant, captain, deputy chief, and now chief of the entire department.
Most of the speeches included an element of humor. Mayor Lee Brand and Dyer zinged Hall; and Hall cracked jokes at his own expense.

Listen to the Community Voice

In his inaugural speech, Hall joked about getting the job, even though he didn’t apply.
“You want to be the chief after the chief,” he said, meaning it would be tough to follow Dyer.
Brand and City Manager Wilma Quan selected Hall, after a nation-wide search did not produce a finalist to City Hall’s liking.
Hall talked about his vision.
“I believe in community voices,” Hall said, describing programs like youth mentoring and neighborhood watch. “I will always put this community first and I’m excited about the future of the Fresno Police Department as we set out on our next chapter.”
When introducing Hall, Dyer joked that Hall — who operated the traffic division — was the department’s first lieutenant and deputy chief to ride a police motorcycle, and would be the first chief to do so as well.
Hall said it may not be a joke.
“I still have a police motorcycle in my garage. It did get a little dusty, but I’m thinking about bringing it out, washing it this weekend. You may see me on a motorcycle very soon,” Hall said.

Dyer, in his final act in uniform, addressed a full city council chamber. He said his proudest accomplishment was never losing an officer in the line of duty.
He talked about the privilege of wearing the uniform — about the trust and responsibility it brings.
“I will always be a cop’s cop. I will never forget where I came from. I love being a police officer. I love serving this community. I love every single employee of the Fresno Police Department. I love every part of Fresno. Every single square inch,” said Dyer, who now will turn his attention to running for mayor.
At the end of the ceremony, Dyer’s eyes welled with tears as he signed off to the dispatch center one last time.
“Chief One, log me off please,” Dyer said. The audience gave him a standing ovation after. Watch that video below:

Hall’s Will Serve 18 Months at Most

Hall’s tenure, though, will last no longer than 18 months. Similar to Dyer, Hall faces mandatory retirement in the spring of 2021. When Brand announced Hall’s appointment on Aug. 23, he said he would continue the search for the next police chief before he leaves the mayor’s office in January 2021.
Dyer might have a role in the decision. He is running to succeed Brand, who announced he would not run for a second term. The election is March 2020. So far, only two major mayoral candidates have emerged: Dyer and Fresno County prosecutor Andrew Janz. If one of them secures a majority vote, a November runoff won’t be needed.