Removal of Notre Dame's Melted Scaffold to Begin 'In Weeks' 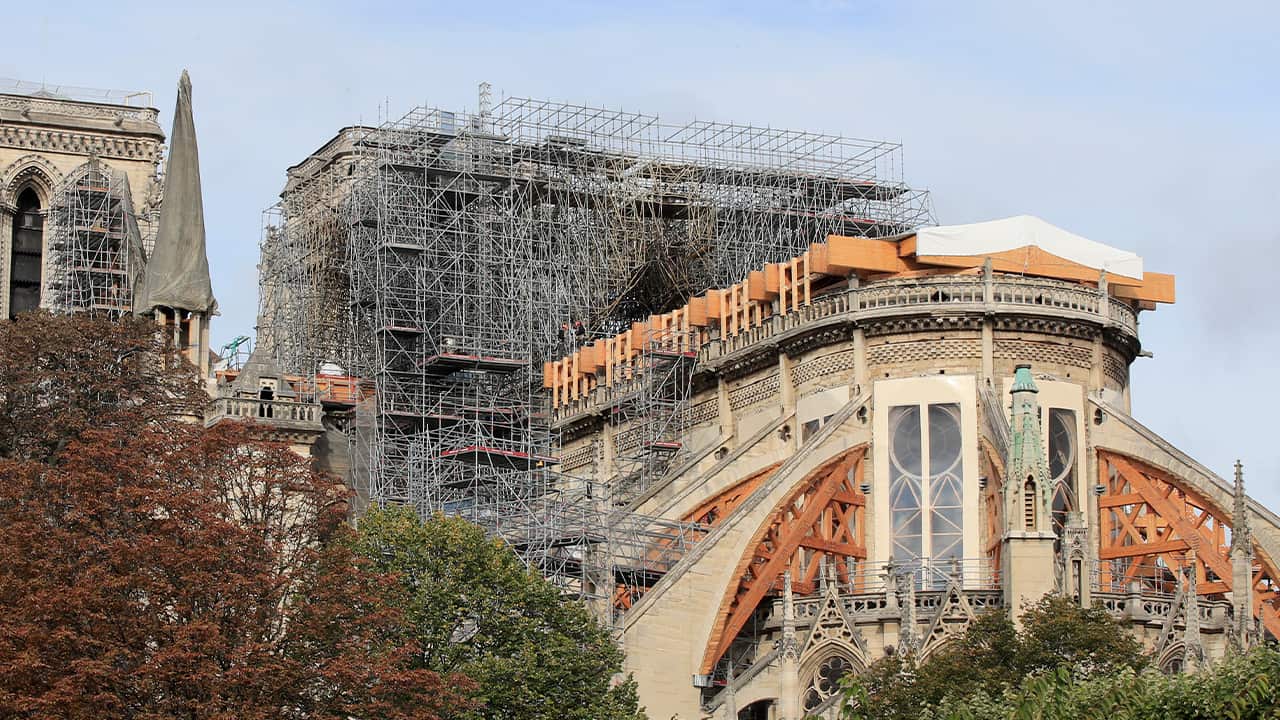 PARIS — Melted scaffolding atop fire-ravaged Notre Dame Cathedral will be removed “in the coming weeks” to allow restoration work to begin next year, France’s culture minister said Tuesday.
It’s been six months since an April 15 fire gutted the medieval Paris structure, which was under renovation at the time and crisscrossed with scaffolding where its spire once stood.


“Our Notre Dame de Paris is not yet totally saved.” — French Culture Minister Franck Riester
The twisted metal remained in place after the fire as engineers tried to determine whether removing it would exacerbate structural weaknesses from the blaze.

French Culture Minister Franck Riester said that before rebuilding can begin, several more months of conservation work done in parallel with an evaluation of the cathedral’s soundness need to be completed.
“Our Notre Dame de Paris is not yet totally saved,” Riester told reporters.
President Emmanuel Macron promised in April that France’s beloved landmark would be restored within five years. Critics say his timeline is overly ambitious.
The culture minister offered few hard deadlines. He told reporters Tuesday that the French government prioritizes quality over speed, though he said the 5-year timeframe represents the state’s “ambition to mobilize.” In this photo taken on Wednesday, Oct. 9, 2019, stone expert Jean-Didier Mertz, looks on next to the remains of the golden angel that was once atop Notre Dame cathedral, in a warehouse at Champs-sur-Marne, west of Paris. Scientists at the French government’s Historical Monuments Research Laboratory are using these objects as clues in an urgent and vital task, working out how to safely restore the beloved Paris cathedral and identify what perils remain inside in a race against the clock. (AP Photo/Francois Mori)

The Budget for the Project Remains Undecided

“For us, the top priority is to do a quality restoration that captures the height of what our history represents for our country, for Paris, for the Catholic religion, for Notre Dame,” Riester said.
The government has not settled on a particular path for reconstruction. Riester promised wide consultation and debate. As head of state, Macron has the final word because the French government owns Notre Dame.


“For us, the top priority is to do a quality restoration that captures the height of what our history represents for our country, for Paris, for the Catholic religion, for Notre Dame.” — French Culture Minister Franck Riester
“We are determined to do things in a totally transparent manner,” Riester said.
The budget for the project also remains undecided. Some 350,000 donors have given or pledged a total of 922 million euros ($1.02 billion), according to Riester.
The Notre Dame Foundation has received 104 million euros ($114 million) to date.
Riester also addressed public criticism that French officials were slow to recognize the potential harmful effects of melted lead from the cathedral’s roof that drifted into the air and onto surfaces below.
He said health officials take regular samples from areas around Notre Dame to check for lead, and that workers on the site take appropriate precautions.
Authorities ran 877 lead tests on people in surrounding neighborhoods at risk of exposure to lead pollution from the fire and only 10 showed dangerously elevated levels, Riester said.