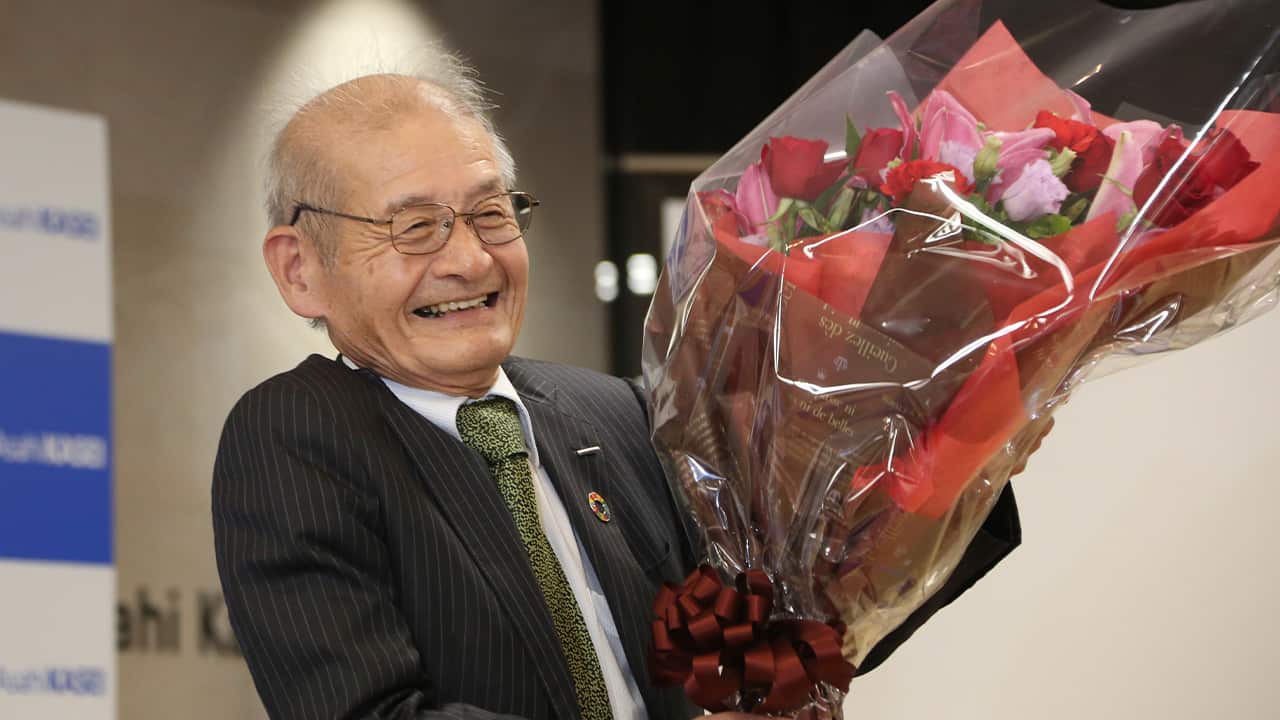 STOCKHOLM — If you’re reading this on a mobile phone or laptop computer, you might thank this year’s three laureates for the Nobel Prize in chemistry for their work on lithium-ion batteries. Nobel chemistry winner John B. Goodenough poses for the media at the Royal Society in London, Wednesday, Oct. 9, 2019. The 2019 Nobel Prize in Chemistry has been awarded to John B. Goodenough, M. Stanley Whittingham and Akira Yoshino for the development of lithium-ion batteries. (AP Photo/Alastair Grant)

The Three Each Had Unique Breakthroughs

“I am overcome with gratitude at receiving this award, and I honestly have so many people to thank, I don’t know where to begin,” he said in a statement issued by his university. “It is my hope that this recognition will help to shine a much-needed light on the nation’s energy future.”
Goodenough, who is considered an intellectual giant of solid state chemistry and physics, is the oldest person to ever win a Nobel Prize — edging Arthur Ashkin, who was 96 when he was awarded the Nobel for physics last year. Goodenough still works every day.
“That’s the nice thing — they don’t make you retire at a certain age in Texas. They allow you to keep working,” he told reporters in London. “So I’ve had an extra 33 years to keep working in Texas.”
The three each had unique breakthroughs that cumulatively laid the foundation for the development of a commercial rechargeable battery, to replace alkaline batteries like those containing lead or zinc, which had their origins in the 19th century.

Lithium-ion batteries — the first truly portable and rechargeable batteries — took more than a decade to develop, and drew upon the work of multiple scientists in the U.S., Japan and around the world.
The work had its roots in the oil crisis in the 1970s, when Whittingham was working on efforts to develop fossil fuel-free energy technologies. He harnessed the enormous tendency of lithium — the lightest metal — to give away its electrons to make a battery capable of generating just over two volts.
By 1980, Goodenough had doubled the capacity of the battery to four volts by using cobalt oxide in the cathode — one of two electrodes, along with the anode, that make up the ends of a battery.
But that battery remained too explosive for general commercial use. That’s where Yoshino’s work in the 1980s came in. He substituted petroleum coke, a carbon material, in the battery’s anode. This step paved the way for the first lightweight, safe, durable and rechargeable commercial batteries to be built and enter the market in 1991. Stanley Whittingham, a British-American chemistry professor at the State University of New York at Binghamton, attends the Advanced Lithium Batteries for Automobile Applications (ABAA) conference in Ulm, Germany, Wednesday, Oct. 9, 2019. Whittingham is one of three scientists who have won this year’s Nobel Prize in Chemistry for their contributions to lithium-ion batteries, which have reshaped energy storage and transformed cars, mobile phones and many other devices in an increasingly portable and electronic world. (Sebastian Gollnow/dpa via AP)

“We have gained access to a technical revolution,” said Sara Snogerup Linse of the Nobel committee for chemistry. “The laureates developed lightweight batteries with high enough potential to be useful in many applications — truly portable electronics: mobile phones, pacemakers, but also long-distance electric cars.”


“We have gained access to a technical revolution. The laureates developed lightweight batteries with high enough potential to be useful in many applications — truly portable electronics: mobile phones, pacemakers, but also long-distance electric cars.” — Sara Snogerup Linse of the Nobel committee for chemistry
“The ability to store energy from renewable sources — the sun, the wind — opens up for sustainable energy consumption,” she added.
Speaking at a news conference in Tokyo, Yoshino said he thought there might be a long wait before the Nobel committee turned to his specialty — but he was wrong. He broke the news to his wife, who was just as surprised as he was.
“I only spoke to her briefly and said, ‘I got it,’ and she sounded she was so surprised that her knees almost gave way,” he said.
The trio will share a 9-million kronor ($918,000) cash award. Their gold medals and diplomas will be conferred in Stockholm on Dec. 10 — the anniversary of prize founder Alfred Nobel’s death in 1896.
On Tuesday, Canadian-born James Peebles won the Nobel physics prize for his theoretical discoveries in cosmology together with Swiss scientists Michel Mayor and Didier Queloz, who were honored for finding an exoplanet — a planet outside our solar system — that orbits a solar-type star.
Americans William G. Kaelin Jr. and Gregg L. Semenza and Britain’s Peter J. Ratcliffe won the Nobel prize for advances in physiology or medicine on Monday. They were cited for their discoveries of “how cells sense and adapt to oxygen availability.”
Two Nobel literature laureates are to be announced Thursday — one for 2018 and one for 2019 — because last year’s award was suspended after a sex abuse scandal rocked the Swedish Academy. The coveted Nobel Peace Prize is Friday and the economics award will be announced on Monday.
Related Topics:batteriesbreakthroughscarbon materialchemistryenergylithium-ionNobel prize
Up Next

US Job Openings Slip 1.7% in August as Labor Market Slows