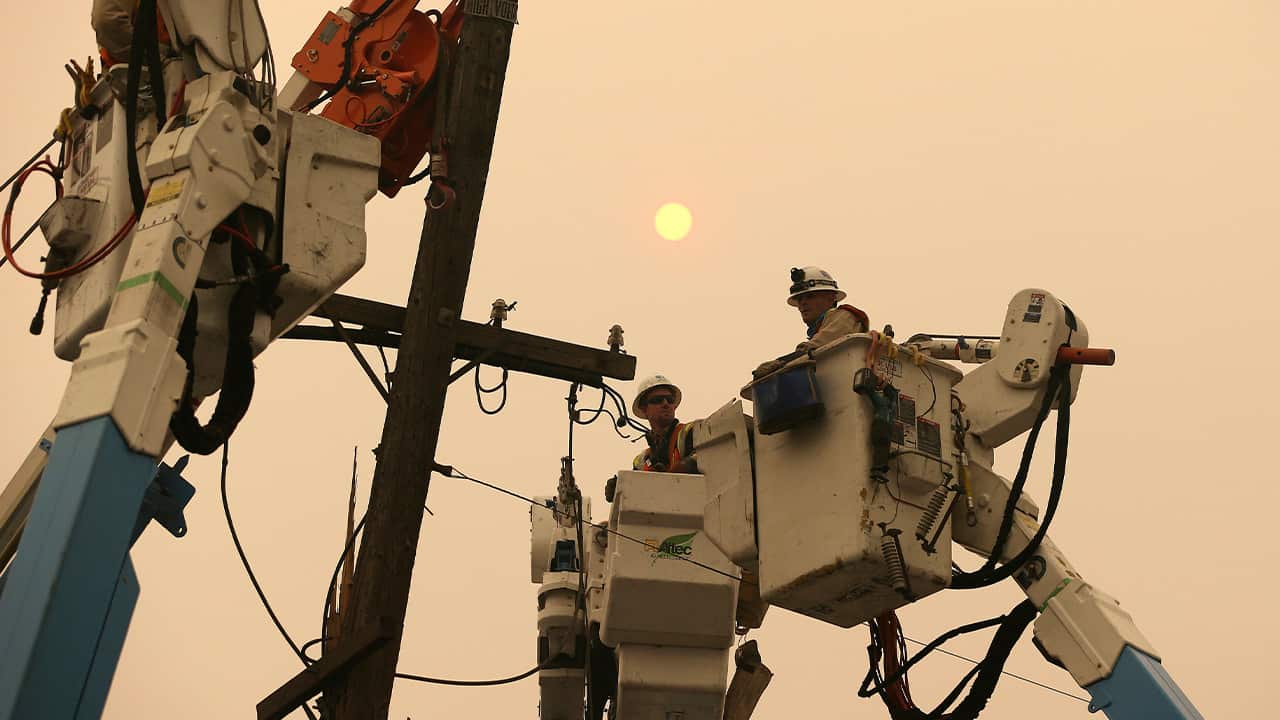 SAN FRANCISCO — Two years to the day after some of the deadliest wildfires tore through Northern California wine country, a utility announced Tuesday it will shut off power to more than 800,000 customers in the largest preventive outage in state history — to try to prevent wildfires caused by faulty power lines.


“We’re ready to go. We’re encouraging our community to be as prepared as possible.” — Jaina French, spokeswoman for the city of Napa
With windy, dry weather in the forecast and warnings of extreme fire danger, Pacific Gas & Electric utility said it will start turning off power to 34 counties in northern and central California after midnight Wednesday.
The Southern California Edison utility website said more than 106,000 of its customers in parts of eight counties could face power cuts.
It may take “several days to fully restore power after the weather passes and safety inspections are completed,” said Michael Lewis, senior vice president of PG&E’s electric operations, in statement.
The number of customers and counties affected includes an area of wine country north of San Francisco where several fires two years ago killed 22 people and destroyed thousands of homes.
San Francisco is the only county in the nine-county San Francisco Bay Area where power will not be affected.
“We’re ready to go,” said Jaina French, spokeswoman for the city of Napa. “We’re encouraging our community to be as prepared as possible.”
That outage will also affect portions of the agricultural Central Valley, the state’s northern and central coasts and the Sierra Nevada foothills where a November wildfire blamed on PG&E transmission lines killed 85 people and devastated the town of Paradise.

Jennifer Siemens, who lost her home in Paradise, rents a house in the nearby town of Oroville and said she is bracing for a third blackout in a month.
Siemens was preparing by having her car gassed up, stocking up with bottled water and flashlights and making sure all of the family’s electronic devices were fully charged.
“What’s wrong with the power lines that they have to do this so much?” asked Siemens. “We don’t want any more fires, obviously, but I feel like they are going a little overboard.”
In Butte County, where Paradise is located, people lined up at gas stations Tuesday morning to fill up their cars and portable containers with fuel for generators. They also rushed to stores to buy flashlights, ice chests and batteries.
PG&E said it planned to update customers by text message and email to Tuesday where and when the power would be cut off. Its website, where people could check whether their addresses would be affected, was down Tuesday afternoon after being overloaded with visitors. In Southern California, the largest numbers of potentially affected customers were in Los Angeles County and to the east in San Bernardino and Riverside counties.
Winds can knock down live wires and power poles or drive trees and other vegetation into contact with them — and some of California’s most destructive blazes in recent years were started by PG&E power lines.
But the potential planned outages will not be limited to fire-prone areas because the utilities must turn off entire distribution and transmission lines to much wider areas to minimize the risk of wildfires.
Public agencies throughout the region were urging people to prepare by buying water and non-perishable food, getting a full tank of gas, having cash at hand and parking vehicles outside garages or making sure they know how to manually open their garage doors.
The California Department of Forestry and Fire Prevention said it increased staffing in preparation for extreme fire weather and what was expected to be the strongest wind event so far this fire season.

“With some of the most destructive and deadliest fires occurring October through December, we need Californians to not be complacent,” said Cal Fire Chief Thom Porter in a news release. “Residents need to be ready to evacuate at a moment’s notice in the event of a wildfire.”