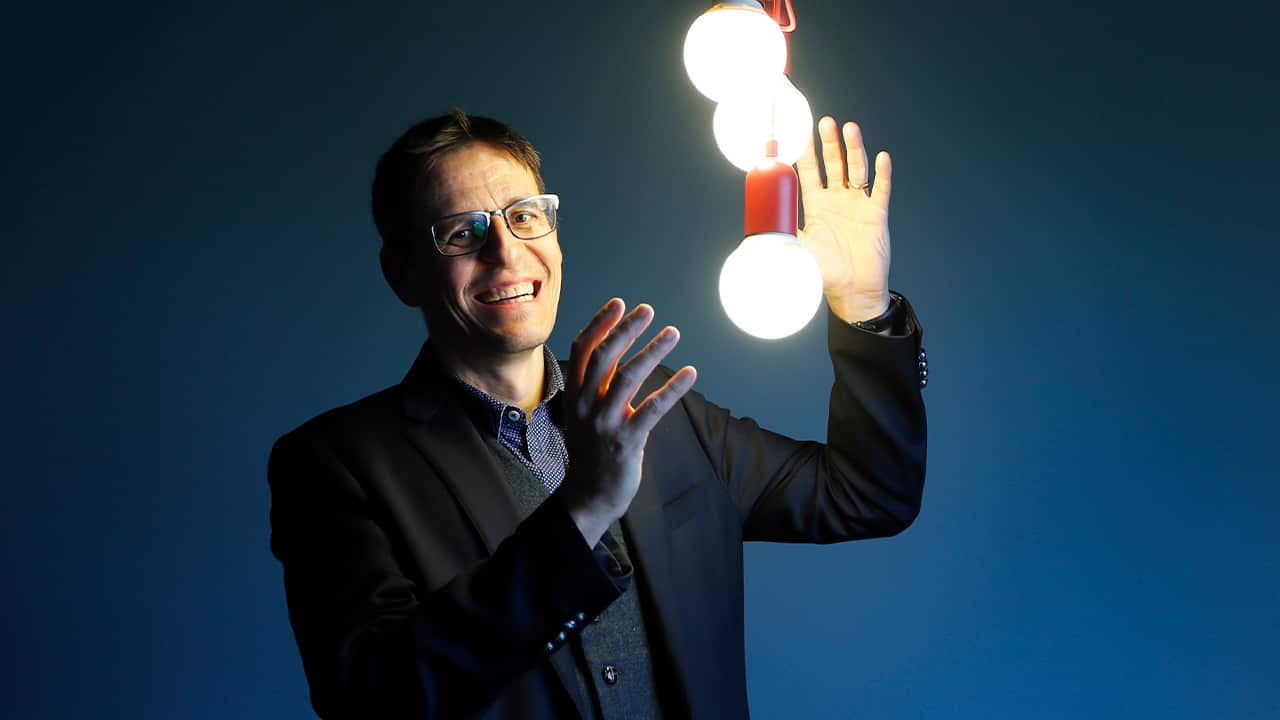 STOCKHOLM — A Canadian-American cosmologist and two Swiss scientists won this year’s Nobel Prize in Physics on Tuesday for exploring the evolution of the universe and discovering a new kind of planet, with implications for that nagging question: Does life exist only on Earth? FILE – Wednesday, May 17, 2006 file photo of Swiss professor Michel Mayor, astrophysicist and director of the Geneva Observatory. The 2019 Nobel prize for Physics was given to James Peebles “for theoretical discoveries in physical cosmology,” and the other half jointly to Michel Mayor and Didier Queloz “for the discovery of an exoplanet orbiting a solar-type star,” said Prof. Goran Hansson, secretary-general of the Royal Swedish Academy of Sciences that chooses the laureates. (Salvatore Di Nolfi, Keystone via AP)

Starting a Revolution in Astronomy

His work, which began in the mid-1960s, set the stage for a “transformation” of cosmology over the last half-century, using theoretical tools and calculations that helped interpret traces from the infancy of the universe, the committee said.
A clearly delighted Peebles giggled repeatedly during a phone interview with The Associated Press, recalling how he answered a 5:30 a.m. phone call from Stockholm thinking that “it’s either something very wonderful or it’s something horrible.”
Peebles said he told his wife about the award, “And of course her reaction was, ‘Oh my God!'”
“I have a peaceful life,” he said. “It’s somehow now totally messed up!”
Mayor and Queloz were credited with having “started a revolution in astronomy” notably with the discovery of exoplanet 51 Pegasi B, a gaseous ball comparable with Jupiter, in 1995 — a time when, as Mayor recalled — that “no one knew whether exoplanets existed or not.”
“Prestigious astronomers had been searching for them for years, in vain!” Mayor quipped.

More Than 4,000 Exoplanets Have Since Been Found in the Milky Way Since Then

The committee said more than 4,000 exoplanets have since been found in the Milky Way since then. In this 2016 photo provided by Princeton University, James Peebles speaks at the 43rd annual Donald R. Hamilton Lecture, at the university in Princeton, N.J. Peebles was among three scientists who won the 2019 Nobel Prize in Physics on Tuesday, Oct. 8, 2019, for their work in understanding how the universe has evolved, and the Earth’s place in it. The prize was given to Peebles “for theoretical discoveries in physical cosmology” and the other half jointly to Michel Mayor and Didier Queloz “for the discovery of an exoplanet orbiting a solar-type star.” (Mark Czajkowski/Princeton University via AP)

This Was the 113th Nobel Prize in Physics Awarded Since 1901

The cash prize comes with a gold medal and a diploma that are received at an elegant ceremony in Stockholm on Dec. 10, the anniversary of the death of prize founder Alfred Nobel in 1896, together with five other Nobel winners. The sixth one, the peace prize, is handed out in Oslo, Norway on the same day.
This was the 113th Nobel Prize in Physics awarded since 1901, of which 47 awards have been given to a single laureate. Only three women have been awarded it so far: Marie Curie in 1903, Maria Goeppert-Mayer in 1963 and Donna Strickland in 2018, according to the Nobel website.
On Monday, Americans William G. Kaelin Jr. and Gregg L. Semenza and Britain’s Peter J. Ratcliffe won the Nobel prize for Physiology or Medicine, for discovering details of how the body’s cells sense and react to low oxygen levels, providing a foothold for developing new treatments for anemia, cancer and other diseases.
Nobel, a Swedish industrialist and the inventor of dynamite, decided the physics, chemistry, medicine and literature prizes should be awarded in Stockholm, and the peace prize in Oslo.
The Nobel Prize for Chemistry will be announced Wednesday, two Literature Prizes will be awarded on Thursday, and the Peace Prize comes Friday. This year will see two literature Prizes handed out because the one last year was suspended after a scandal rocked the Swedish Academy.