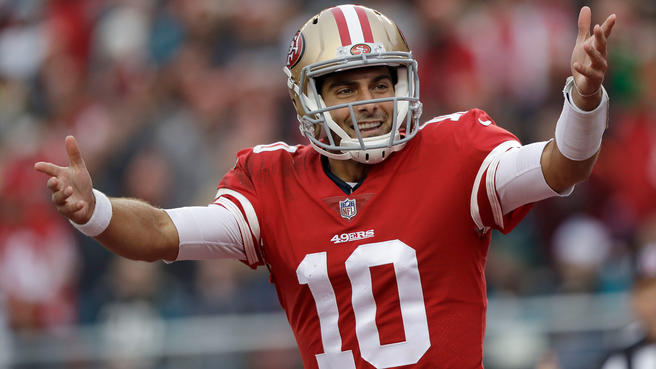 SANTA CLARA — Jimmy Garoppolo never even made it to the fourth game of his first full season as starting quarterback for the San Francisco 49ers.

A knee injury ended his season early and all hopes for the 49ers that their new franchise quarterback could lead the team back into contention.


“Jimmy’s extremely resilient. He goes out there and makes a mistake, he doesn’t back down, he doesn’t curl up and play it safe. He’s still ready to rip it. I love to see that, I love to see his trust in his receivers.” — 49ers fullback Kyle Juszczyk
Garoppolo is back healthy again and having shaken off some early season rust is showing just why San Francisco believed in him enough to give him a $137.5 million contract despite only a handful of starts.

He is a major reason why the Niners (3-0) are unbeaten after three weeks for the first time in 21 years. And now he gets the opportunity to show the rest of the football world what he can do when he gets the prime-time Monday Night Football stage on ESPN against the visiting Cleveland Browns (2-2).
“It’ll be exciting, a lot of juice,” Garoppolo said. “Levi’s was rocking last time when the Steelers came and wouldn’t expect anything less from the faithful. It’ll be a fun atmosphere, that’s for sure.”
This is Garoppolo’s first prime-time start since he made his initial appearance as a starting quarterback in the 2016 season opener for New England. With Tom Brady serving a suspension, Garoppolo threw for 264 yards and a touchdown in a 23-21 victory at Arizona that made him one of the league’s more intriguing young quarterbacks.
He got hurt the following week in a win over Miami and didn’t get another chance as a starter until after he was traded to San Francisco midway through the 2017 season.
Garoppolo stepped in for a struggling team late that year and won five straight starts to end the season, earning him the job for the long term and the lucrative contract.
But after some early-season struggles last year, Garoppolo went down with the injury at Kansas City, derailing his opportunity to prove he belongs among the game’s top passers.

Garoppolo Has His Teammates’ Respect

Now after a preseason that was rough at times and a shaky performance in a season-opening win at Tampa Bay, Garoppolo seems to be hitting his stride. He threw for 296 yards and three TDs in Week 2 against an overmatched Bengals defense and then withstood heavy blitzing from Pittsburgh the following week to throw for 277 yards and the game-winning score in the closing minutes of a 24-20 win.
It’s that kind of performance in the face of heavy pressure in the pocket that has earned Garoppolo the respect of his teammates
“Jimmy’s extremely resilient,” fullback Kyle Juszczyk said. “He goes out there and makes a mistake, he doesn’t back down, he doesn’t curl up and play it safe. He’s still ready to rip it. I love to see that, I love to see his trust in his receivers.”

This game also offers Browns second-year quarterback Baker Mayfield another chance to show what he can do on a big stage.
The No. 1 overall pick in 2018 made a big first impression on the NFL, breaking Peyton Manning’s rookie record with 27 touchdown passes in just 14 games. He showed off his accuracy and had a flair that included trash-talking opponents, delighting fans and angering his critics.
After an offseason full of praise and hype after Cleveland added big-play receiver Odell Beckham Jr. to the lineup, Mayfield’s start to this season wasn’t quite as smooth as his rookie year.
He threw five interceptions and only three TD passes in the first three weeks as Cleveland got off to a 1-2 start that had skeptics questioning if the Browns were more style than substance.
But he bounced back to throw for 342 yards and a touchdown in a 40-25 win last week at Baltimore that moved the Browns back into a tie for first place in the AFC North and showed why many believed they were the up-and-coming team to watch in the AFC this season.
“One thing that gets overlooked sometimes is the guys around him play better, too,” coach Freddie Kitchens said. “I have said this before, so much of the quarterback and his success is dictated on other people doing their job. We had a lot of people the other day doing their job. That is the expectation that I am talking about that we put on ourselves. Just do your job.”

As Supreme Court Opens, How Far Right Will Justices Move?