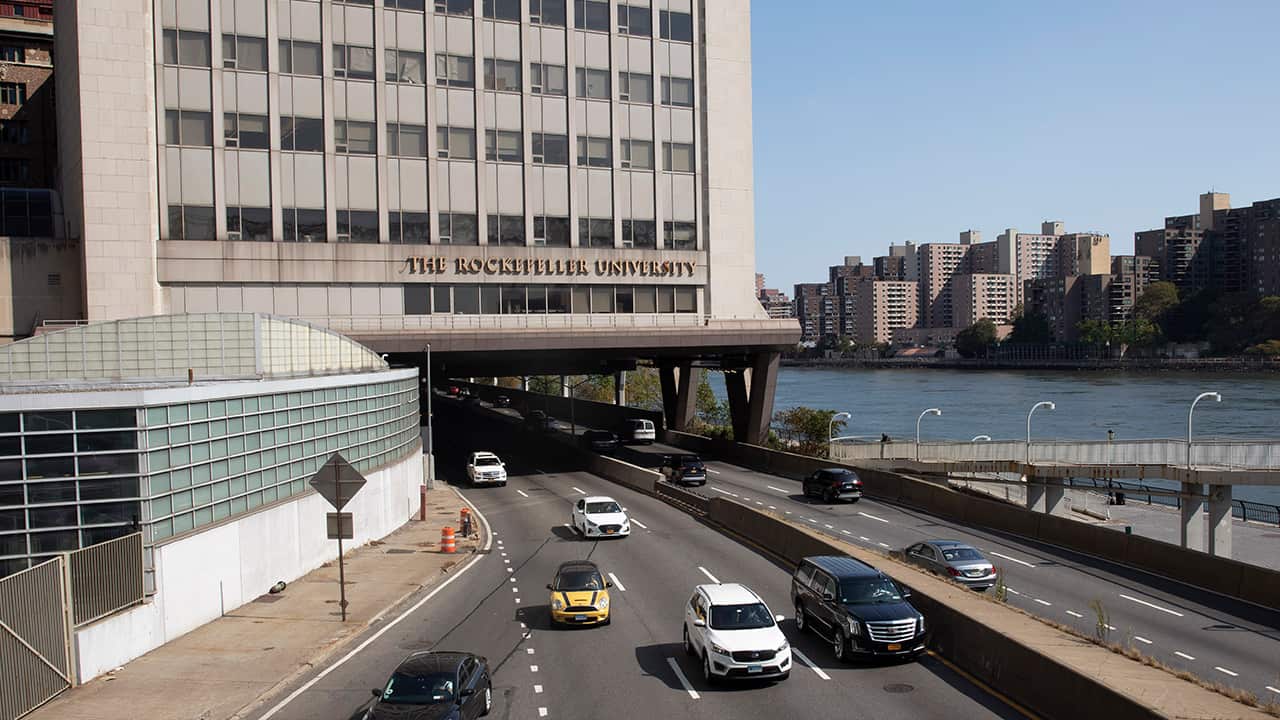 BOSTON — Prestigious universities around the world have accepted at least $60 million over the past five years from the family that owns the maker of OxyContin, even as the company became embroiled in lawsuits related to the opioid epidemic, financial records show.


“Money from the Sacklers should be understood as blood money. Universities shouldn’t take it, and universities that have taken it should give it back.” — Dr. Andrew Kolodny, a leading critic of Purdue and the Sacklers
Some of the donations arrived before recent lawsuits blaming Purdue Pharma for its role in the opioid crisis. But at least nine schools accepted gifts in 2018 or later, when states and counties across the country began efforts to hold members of the family accountable for Purdue’s actions. The largest gifts in that span went to Imperial College London, the University of Sussex and Yale University.
Major beneficiaries of Sackler family foundations also included the University of Oxford in England and Rockefeller, Cornell and Columbia universities in New York, according to tax and charity records reviewed by The Associated Press.


Related Story: Efforts to Minimize Opioid Painkillers After Surgery Appear to Be Working

In total, at least two dozen universities have received gifts from the family since 2013, ranging from $25,000 to more than $10 million, the records show.
Some skeptics see the donations as an attempt to salvage the family’s reputation.
“Money from the Sacklers should be understood as blood money,” said Dr. Andrew Kolodny, a leading critic of Purdue and the Sacklers who heads a program on opioid policy at Brandeis University, which was not among the schools identified in tax records as receiving donations from the Sacklers. “Universities shouldn’t take it, and universities that have taken it should give it back.”
Representatives of family members declined to comment.

Family Has Been a Major Philanthropic Figure in the Worlds of Art, Medicine and Education

The AP reviewed charitable giving from more than a dozen Sackler family foundations as reported to the Internal Revenue Service, the Canada Revenue Agency and the Charity Commission for England and Wales. The recipients included schools in the United States, the United Kingdom, Canada and Israel.
For decades, the family has been a major philanthropic figure in the worlds of art, medicine and education. They were listed by Forbes magazine in 2016 as one of the nation’s 20 wealthiest families, with holdings of $13 billion.
Much of their giving to universities has fueled research in areas including genetics and brain development. Other gifts supported medical schools, student scholarships and faculty jobs. It amounts to a small fraction of schools’ overall fundraising, but some say the money has been a boon to important programs.
When evaluating the ethics of Sackler gifts, some experts argue, it’s important to consider what schools knew about the family and when they knew it.
“We’re looking at this through the lens of what people know now,” said Ross Cheit, chairman of the Rhode Island Ethics Commission and a professor at Brown University, which has accepted donations from the Sacklers. “My sense is, during the time period we’re talking about, people’s views about that source of money changed, a lot.”
As opioid deaths have mounted, some schools joined with businesses and museums cutting ties with the family, but none plans to return the money. One school is redirecting unspent donations. Most schools refused to say whether they would accept donations in the future.
Kolodny, who is also director of the group Physicians for Responsible Opioid Prescribing, said the money, if returned, could be used to help cities and states harmed by the opioid crisis, which has killed more than 400,000 people in the U.S. in the past two decades.
The family’s ties with colleges have come under fire recently from some students, alumni and politicians.

Petitions at New York University and Tel Aviv University called on the schools to strip the Sackler name from research institutes. A 2018 lawsuit from the Massachusetts attorney general argued that Purdue Pharma used its influence at Tufts University and other schools to promote the company’s opioids.
Tufts, near Boston, said it is reviewing its relationship with Purdue and declined to answer questions until the review is finished. The university’s school of graduate biomedical studies was founded with a Sackler gift in 1980 and carries the family’s name.
Kolodny said schools should have known about the Sacklers’ role in the opioid crisis after 2007, when Purdue pleaded guilty to federal charges that it misled the public about the risks of OxyContin. In that case, the company agreed to pay more than $600 million in civil and criminal penalties. By 2017, he said, the Sacklers’ ties to Purdue and OxyContin were common knowledge.
The records reviewed by the AP may not capture all giving by the family. Colleges are not required to disclose donation information, and many refused to provide details.
Purdue Pharma separately provides research money to some schools. Unlike nonprofit groups, it is not required to disclose its giving in publicly available tax forms.
Rockefeller University accepted more Sackler money than any other school in recent history, receiving more than $11 million from the Sackler Foundation in Canada. Most came from a single $10 million gift in 2014. Smaller donations continued through at least 2017. Richard Sackler, a former president of Purdue Pharma, previously taught at the school.

Rockefeller, which enrolls about 200 students in graduate science programs, did not respond to requests for comment.
Behind Rockefeller was the University of Sussex in England, which received $9.8 million, according to tax records. A university spokesman said the school actually received about $4 million over the past decade, while another pledge “was not progressed.” The funding supports Sussex’s Sackler Centre for Consciousness Science, which performs research of “paramount importance” that will continue for years, the school said. FILE – In this Sept. 3, 2017, file photo, people walk around Oxford University’s campus in Oxford, England. Tax and charity records show that prestigious universities around the world, including Oxford, have accepted at least $60 million from the family that owns OxyContin maker Purdue Pharma over the past five years, even as the company has been embroiled in lawsuits over its role in the opioid epidemic. (AP Photo/Caroline Spiezio, File)

England’s Opioid Addiction Rates Are Far Lower Than Those in U.S.

Sussex did not say how it would handle future gift proposals from the Sacklers.
Oxford, the University of Glasgow in Scotland and Cornell each received $5 million to $6 million, tax records show. Columbia University followed with nearly $5 million, while Imperial College London and McGill University in Montreal each received more than $3 million.
The Sacklers have long held a presence in Britain, where Mortimer Sackler, one of three brothers who founded Purdue, lived for decades before his death in 2010. Some of the family’s major foundations in the United Kingdom have suspended giving.
England’s opioid addiction rates are far lower than those in the U.S., but they have climbed steadily in recent years, stoking fears of a crisis. Rising overdoses and deaths in Canada have spurred health officials to declare a crisis there, too.
Oxford said all gifts must pass a review committee and school gift guidelines. The panel weighs the source of the wealth and may reconsider donations “in the light of new information,” the school said.
The AP contacted all universities that were identified in tax records as receiving more than $1 million, along with some that were not listed in tax records but previously publicized major gifts from the Sacklers.
Of those 20 schools, three, Cornell, Yale and the California Institute of Technology, said they had made formal decisions to reject future funding from the family.
Yale spokeswoman Karen Peart said the school decided this year not to accept new gifts. Richard Sackler, the former Purdue president, previously served on an advisory board at the Yale Cancer Center, and a science institute at Yale is named after the family.

At Many Schools, Money Already Spent

Some schools said they had no plans to accept Sackler funding for the foreseeable future, including Brown and the University of Washington. Most others refused to disclose their plans.
University of Connecticut spokeswoman Stephanie Reitz said all the school’s substantial gifts came prior to 2012. Returning the money, she said, would harm students and researchers who benefit from it, while doing nothing to “undo the damage of the opioid crisis.”


Related Story: Revamped OxyContin Was Supposed to Reduce Abuse, but Has It?

The 2015 gift was intended to create a new arts initiative called the Brown Sackler Arts Alliance, but the school says it was never spent. Brown officials decided to pause discussions about the arts series because of the “growing national conversation” about Purdue, the family and the opioid epidemic, school spokesman Brian Clark said.
At Harvard University, activists have pressured the school to strip the Sackler name from a campus museum, but administrators argue that the money for the building was given before OxyContin was developed. Tax records reviewed by the AP show a single gift to Harvard in recent history, a $50,000 donation in 2016.
Connecticut-based Purdue Pharma filed for bankruptcy last month as part of an effort to settle some 2,600 lawsuits accusing it of fueling the opioid crisis to drive profits. The company has no connection to Purdue University in Indiana.
Related Topics:lawsuitsopioid epidemicOxyContinSackler familyscholarshipsschoolsuniversities
Up Next