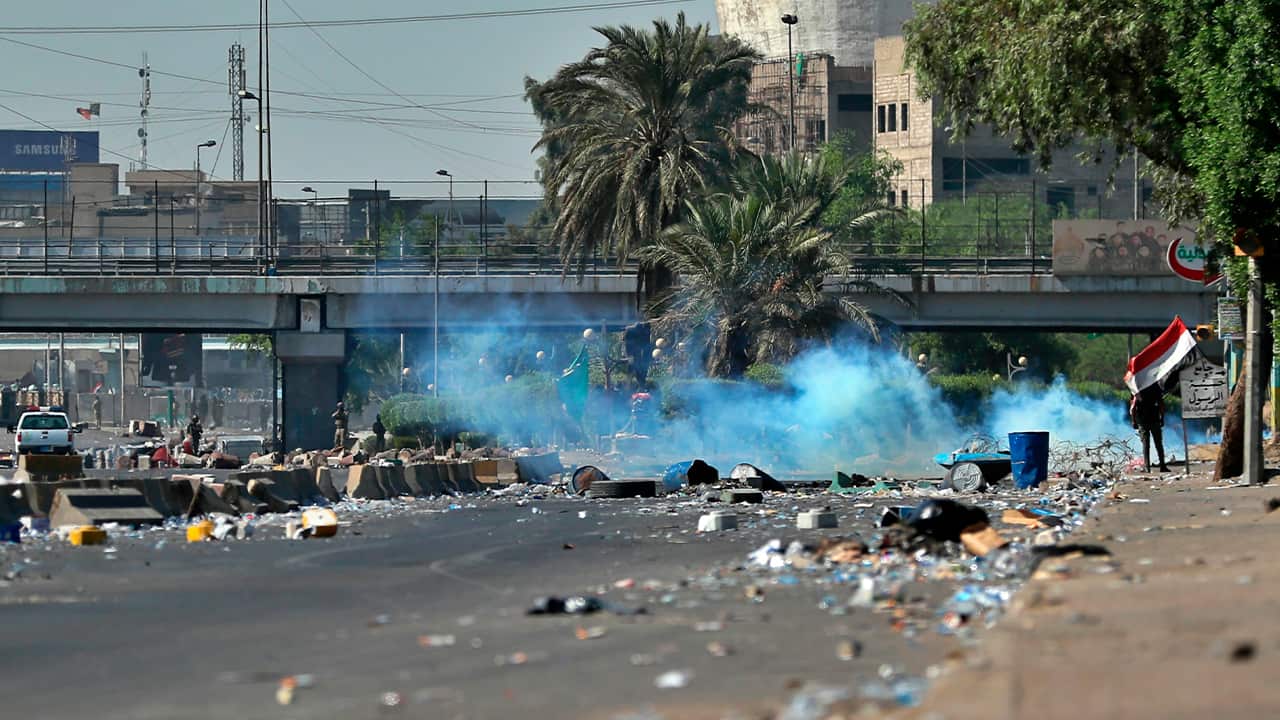 Authorities have also cut internet access in much of Iraq since Wednesday night, in a desperate move to curb the rallies.
Iraq’s most senior Shiite spiritual leader Grand Ayatollah Ali al-Sistani urged both sides to end the violence, and he blamed politicians, particularly lawmakers, for failing to enact promised reforms on the economy and corruption. The comments were his first since the protests began, and many across Iraq’s predominantly Shiite south had looked to the influential cleric for guidance.
Al-Sistani singled out the leaders of the two biggest parliament blocs.
“The government and the political sides have not fulfilled the demands of the people to fight corruption,” al-Sistani said in his Friday sermon, delivered by his representative Ahmed al-Safi in the Shiite holy city of Karbala.
Al-Sistani urged the government to “carry out its duty” to ease people’s suffering and reiterated his call for a committee of technocrats to make recommendations on fighting corruption as a way out of the current crisis.
It was not immediately clear whether his comments would give momentum to protesters or help resolve the situation.
Later, an influential Shiite cleric whose Sairoon political bloc came in first in last year’s national elections said he was suspending participation in parliamentary activities until the government introduces a program that serves Iraqi aspirations.

Muqtada al-Sadr asked members of his coalition to boycott sessions until the government issues a program acceptable to the people. Sairoon won the largest single bloc of seats last year, with 54 of the 329-seat parliament.
Meanwhile, Iraqi hospital officials reported nine more deaths in the southern city of Nasiriyah, about 200 miles southeast of Baghdad.

He also defended the security forces, saying they abide by strict rules against use of “excessive violence.” He blamed protesters for escalating the bloodshed.
He also said, without elaborating, that he “regrets some have successfully derailed some of the protests from their peaceful path” in order to “exploit” the violence for political reasons.
Abdul-Mahdi’s government has been caught in the middle of increasing U.S.-Iran tensions in the region. Iraq is allied with both countries and hosts thousands of U.S. troops, as well as powerful paramilitary forces allied with Iran.
The mostly leaderless protests have been concentrated in Baghdad and the south, bringing out jobless youths and university graduates who are suffering under an economy reeling from graft and mismanagement.
In Nasiriyah, protester Haidar Hamid dismissed the prime minister’s speech, saying he was looking to Shiite religious leaders for a resolution.
“If the government is not dissolved, we will avenge our martyrs,” said Hamid, who is 32 and unemployed.
A group that monitors internet and cybersecurity, NetBlocks, said the internet in most of Iraq was briefly restored before Abdul-Mahdi’s speech but access was shut down again by the time he was onscreen, apparently after new videos of the protests emerged. The internet in Iraq’s northern Kurdish region has not been affected.