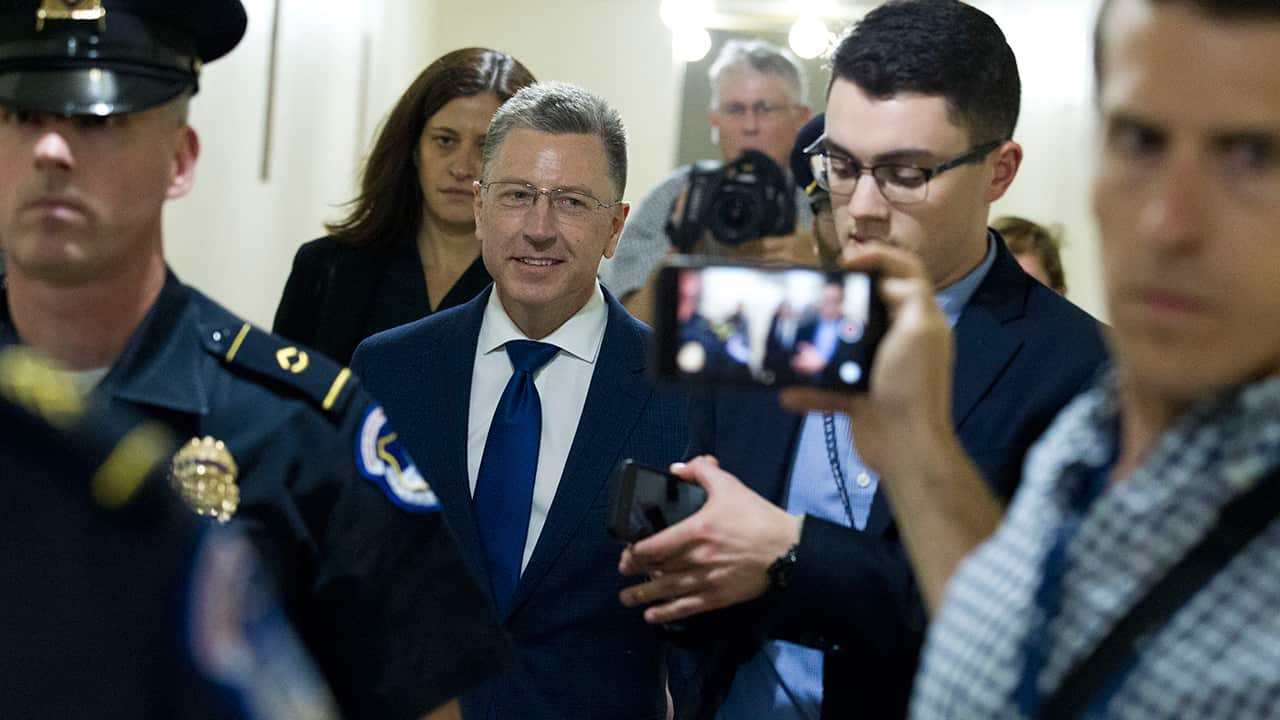 WASHINGTON — Top U.S. diplomats encouraged Ukraine’s newly elected president to conduct an investigation linked to Joe Biden’s family in return for a high-profile visit with President Donald Trump. It soon escalated into what one diplomat feared was a “crazy” swap that risked vital U.S. military aid.

Trump Put Hold on $250 Million in Military Assistance to Ukraine

“Phone call went well,” wrote Andrey Yermak in a text to Volker later that day after the two presidents spoke. Yermak suggested several dates when Trump and Zelenskiy could meet in September.
But all that planning started to unravel when Zelenskiy’s aide tried to lock in a date for the Trump meeting before putting out the statement on the investigations.
“Once we have a date we will call for a press briefing, announcing upcoming visit and outlining vision for the reboot of US-UKRAINE relationship , including among other things Burisma and election meddling in investigations,” Yermak wrote two weeks later.
“Sounds great!” texted Volker.
Volker and the two other diplomats — William “Bill” Taylor, the charge d’affaires at the U.S. embassy in Ukraine, and Gordon Sondland, the U.S. ambassador to the European Union — discussed the statement Zelenskiy would issue in support of the investigation. As the negotiations progressed, Sondland said Trump “really wants the deliverable.”
Then, Trump put a hold on $250 million in military assistance to Ukraine, which was depending on the funds as part of its defense against Russia.
“Need to talk with you,” Yermak wrote to Volker.
Taylor, the seasoned top diplomat in the Ukrainian embassy, conveyed his concerns and questioned whether the money was being withheld until Ukraine agreed to Trump’s demand.

“Are we now saying that security assistance and WH meeting are conditioned on investigations?” he wrote.
“This is my nightmare scenario,” Taylor texted his colleagues days later. Taylor said that by withholding the Ukrainian assistance, “we have already shaken their faith in us.”

‘I Suggest We Stop the Back and Forth by Text’

The text messages released Thursday show that within a month of the call, Trump has canceled the visit with Zelenskiy, sending the diplomats into an effort to salvage a meeting with Vice President Mike Pence or possibly Secretary of State Mike Pompeo.
What followed was the scramble, and finger-pointing, to apparently fix what had been launched.
Taylor told Sondland he was “counting on you to be right,” and Sondland snapped back, “Bill, I never said I was right.”
Sondland early on had texted that he wanted to get the conversation started with Ukraine “irrespective of the pretext” because he was “worried about the alternative.” Now, he was saying, they have identified the best path forward, and “let’s hope it works.”
Taylor then texted, “As I said on the phone, I think it’s crazy to withhold security assistance for help with a political campaign.”
After a more than four-hour pause, Sondland texted Taylor that he was incorrect, and wrote that Trump “has been crystal clear, no quid pro quos of any kind.”
He also wrote, “I suggest we stop the back and forth by text.”
In releasing the exchanges Thursday, the Democratic committee chairmen said they are “still only a subset of the full body of the materials” provided by Volker, which they hope to make public later.