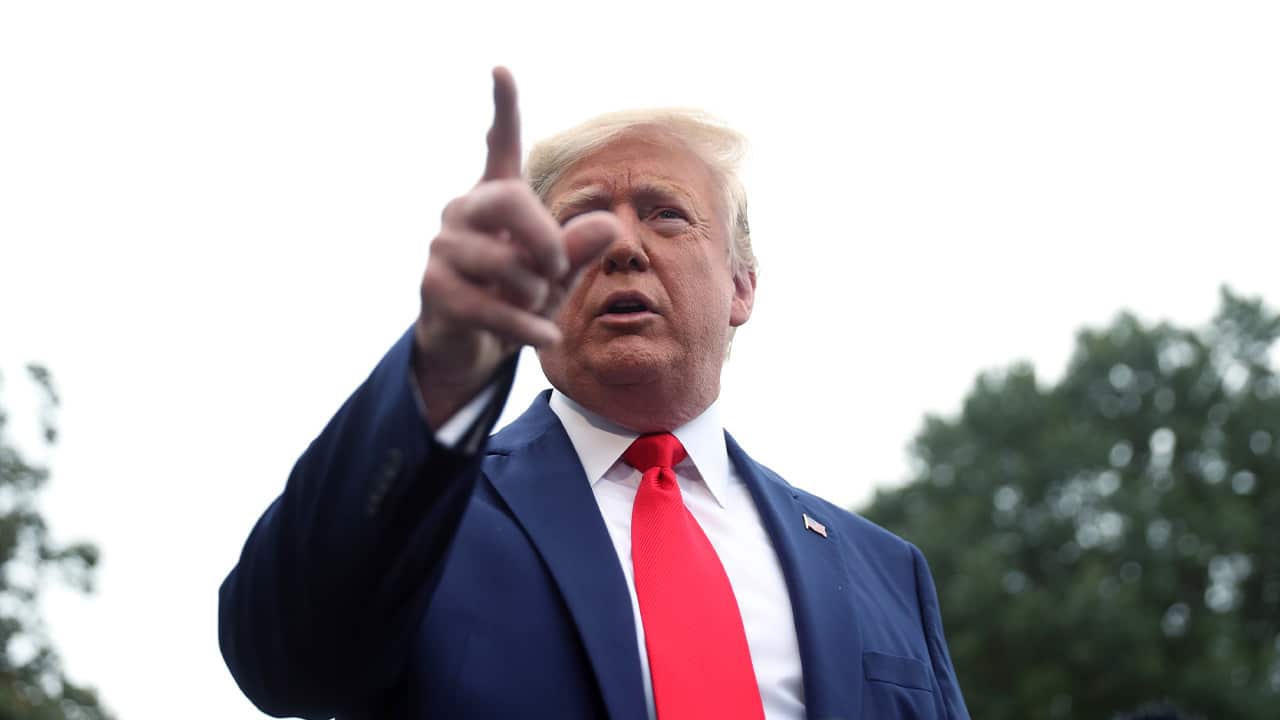 WASHINGTON — Ensnarled in an impeachment investigation over his request for Ukraine to investigate a chief political rival, President Donald Trump on Thursday called on another nation to probe former Vice President Joe Biden: China.


“I have a lot of options on China, but if they don’t do what we want, we have tremendous, tremendous power.” — President Donald Trump
“China should start an investigation into the Bidens,” Trump said in remarks to reporters outside the White House. Trump said he hadn’t directly asked Chinese President Xi Jinping to investigate Biden and his son Hunter but said it’s “certainly something we could start thinking about.”
Trump and personal lawyer Rudy Giuliani have also tried to raise suspicions about Hunter Biden’s business dealings in China, leaning on the writings of conservative author Peter Schweizer. But there is no evidence that the former vice president benefited financially from his son’s business relationships.

Trump’s requests for Ukrainian President Volodymyr Zelenskiy to dig up dirt on Biden, as well as Giuliani’s conduct, are at the center of an intelligence community whistleblower complaint that sparked the House Democratic impeachment probe last week.
The president’s reference to China came unprompted in an unrelated question about the July 25 Ukraine call and moments after he was asked about trade negotiations with China to end a yearlong trade war that has been a drag on both nation’s economies.
“I have a lot of options on China, but if they don’t do what we want, we have tremendous, tremendous power,” Trump said.
He later alleged without evidence that China had a “sweetheart deal” on trade with the U.S. because of the Bidens.

Trump Has Sought to Implicate Biden and His Son

“You know what they call that,” Trump said. “They call that a payoff.”
Biden campaign Chairman Cedric Richmond dismissed Trump’s lurch into China, saying it is a reprisal of his Ukrainian efforts to taint Biden and a reflection of polling showing Biden leading Trump in a hypothetical head-to-head matchup. “This president is scared, and he’s acting out,” the Louisiana congressman said.
The Biden campaign charged that Trump’s comments were “equivalent” to his call in 2016 for Russia to release democratic nominee Hillary Clinton’s emails if they had obtained them by hacking, which U.S. intelligence agencies later assessed to be the case.
Biden communications director and deputy campaign manager Kate Bedingfield called it “a grotesque choice of lies over truth and self over the country.”


Related Story: Pelosi Orders Impeachment Probe: 'No One Is Above the Law'

On Monday, Geng Shuang, a spokesman for China’s Ministry of Foreign Affairs called the allegation that Chinese government business gave Biden’s son $1.5 billion “totally groundless.”
Trump’s comments came as he publicly acknowledged that his message to Ukrainian President Volodymyr Zelenskiy and other officials was to investigate the 2020 Democratic presidential contender. Trump’s accusations of impropriety are unsupported by evidence.
“It’s a very simple answer,” Trump said, of his call with Zelenskiy. “They should investigate the Bidens.”
Trump has sought to implicate Biden and his son in the kind of corruption that has long plagued Ukraine. Hunter Biden served on the board of a Ukrainian gas company at the same time his father was leading the Obama administration’s diplomatic dealings with Kyiv. Though the timing raised concerns among anti-corruption advocates, there’s been no evidence of wrongdoing by either the former vice president or his son.
Related Topics:ChinaChinese President Xi JinpingHillary ClintonJoe BidenPresident Donald TrumpUkraineUkrainian President Volodymyr Zelenskiy
Up Next