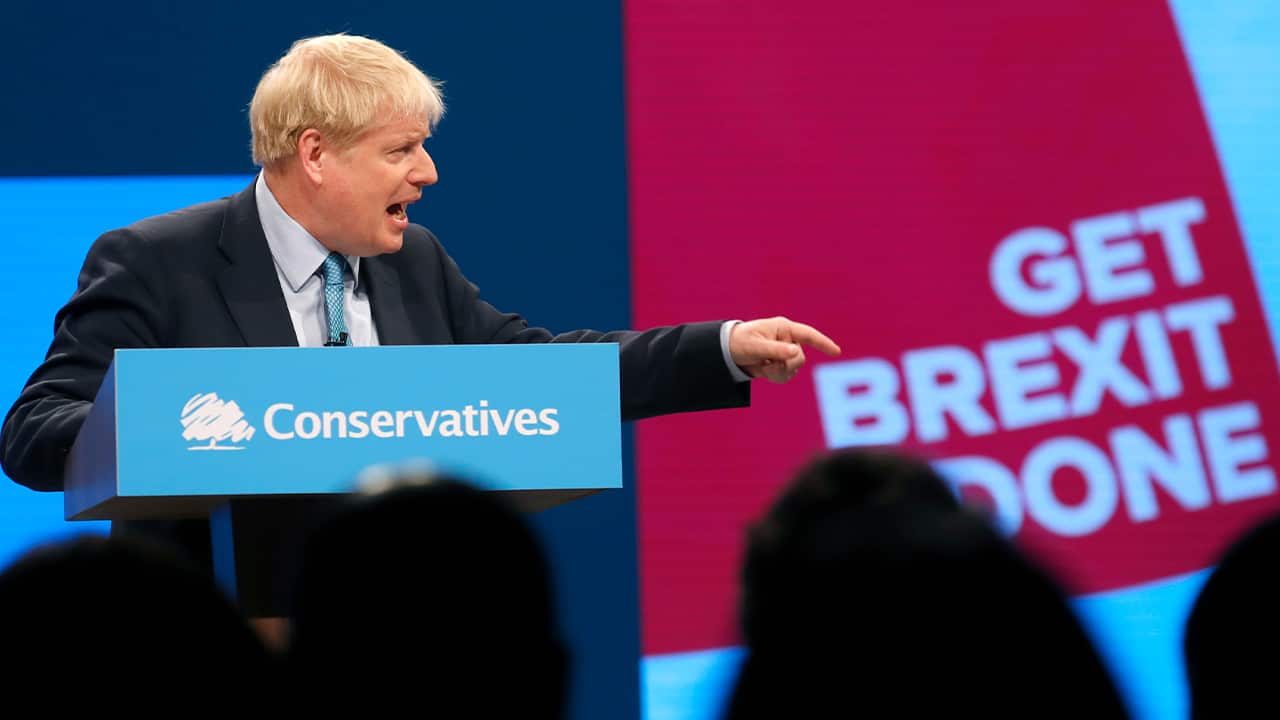 MANCHESTER, England — The U.K. offered the European Union a proposed last-minute Brexit deal on Wednesday that it said represents a realistic compromise for both sides, as British Prime Minister Boris Johnson urged the bloc to hold “rapid negotiations towards a solution” after years of wrangling.

The Plan Is Likely to Face Deep Skepticism From EU Leaders

He said the government was offering “constructive and reasonable proposals” to the EU.
Johnson said the plan was “a compromise by the U.K. And I hope very much that our friends understand that and compromise in their turn.”
But the plan is likely to face deep skepticism from EU leaders, who doubt the U.K. has a workable proposal to avoid checks on goods or people crossing the Irish border.
A Brexit agreement between the EU and Johnson’s predecessor, Theresa May, was rejected by the U.K. Parliament, largely because of opposition to the “backstop,” an insurance policy designed to ensure there is no return to customs posts or other infrastructure on the Irish border.
An open border underpins both the local economy and Northern Ireland’s peace process. But Johnson and other British Brexit supporters oppose the backstop because it would keep the U.K. tightly bound to EU trade rules in order to avoid customs checks — limiting the country’s ability to strike new trade deals around the world.
Johnson insisted that “we will under no circumstances have checks at or near the border in Northern Ireland.”
The British proposal involves “an all-island regulatory zone on the island of Ireland, covering all goods including agrifood.” That would keep Northern Ireland in a regulatory zone with the EU for food, agricultural and industrial products, removing the need for checks. Delegates arrive in heavy rain at the Conservative Party Conference in Manchester, England, Tuesday, Oct. 1, 2019. Britain’s Prime Minister Boris Johnson said Tuesday that his government prepared at last to make firm proposals for a new divorce deal with the European Union. Britain is due to leave the 28-nation bloc at the end of this month, and EU leaders are growing impatient with the U.K.’s failure to set out detailed plans for maintaining an open border between Northern Ireland and Ireland — the key sticking point to a deal. (AP Photo/Frank Augstein)

Johnson Has Vowed That Britain Will Leave on Oct. 31

The U.K. proposal does not put a time limit on that status, though it would have to be renewed every four years by the Northern Ireland Assembly. However, that assembly has been suspended for more than two years by a dispute between the main Unionist and Nationalist power-sharing parties.
Under the plan there would still need to be customs checks, but Johnson suggested in his letter that they could be carried out away from the border at “other points on the supply chain,” though he did not specify where.
The EU said it would give the British proposal serious legal vetting before deciding whether it could be a basis for future talks.
The European Commission said in a statement that ” we will examine (the U.K. text) objectively and in light of well-known criteria,” which includes whether it prevents a hard border on the island of Ireland, preserves cooperation between the Republic of Ireland and Northern Ireland and respects the EU rules on trade across borders.
Juncker is to speak with Johnson in the afternoon and technical talks among both sides are planned.
Johnson has vowed that Britain will leave on Oct. 31, with or without a Brexit deal.
In Wednesday’s speech he repeated his contention that the U.K. can handle any bumps that come from tumbling out of the bloc without a deal, which would mean the instant imposition of customs checks and other barriers between Britain and the EU, its biggest trading partner.
A no-deal Brexit is “not an outcome we want … (but) it is an outcome for which we are ready,” he said.

The Brash Brexit Champion Is Popular With Many Conservative Members

But the U.K. government and businesses both say the disruptions would be substantial, with the flow of goods coming into Britain through the major Channel port of Dover cut in half.
Many lawmakers want to prevent a no-deal exit, and have passed a law that compels the government to seek a delay to Brexit if it can’t get an agreement with the EU by Oct. 19. Johnson says he won’t do that, although he also insists he will obey the law. He has not explained how doing both those things will be possible.