MANCHESTER, England — After months of Brexit stalemate, Britain is finally about to play its hand, setting out Prime Minister Boris Johnson’s proposals for a last-minute divorce deal with the European Union.

It’s a crucial moment for the embattled leader, who is faced with a skeptical EU, a divided U.K. and a supportive but worried Conservative Party.

The party that chose Johnson as its leader in July is mostly — but not unanimously — rallying behind a politician whose drive and energy have been stained by allegations of improper behavior and divisive political tactics.

Johnson confirmed Tuesday that the government will send formal Brexit proposals to Brussels within days, saying “this is the moment when the rubber hits the road.”

Britain is due to leave the 28-nation bloc in just 30 days, and EU leaders are impatient with the U.K.’s failure to set out detailed plans for maintaining an open border between the U.K.’s Northern Ireland and EU member Ireland — the key sticking point to a deal.

Johnson said details would be disclosed “very soon.” The U.K. plans to send them to Brussels within days after the governing Conservative Party conference ends Wednesday in Manchester, northwest England.

Johnson says Britain will leave the EU on the scheduled Oct. 31 date with or without a deal. A Brexit agreement between the EU and his predecessor, Theresa May, was rejected three times by the U.K. Parliament, largely because of opposition to the “backstop,” an insurance policy designed to ensure there is no return to customs posts or other infrastructure on the Irish border.

An open border underpins both the local economy and Northern Ireland’s peace process. But British Brexit supporters oppose the backstop because it would keep the U.K. tightly bound to EU trade rules in order to avoid customs checks — limiting the country’s ability to strike new trade deals around the world.

“People here don’t want a customs border between north and south and no British government should seek to impose customs posts against the will of the people on the island of Ireland.” — Irish Prime Minister Leo Varadkar

So far, the U.K. has floated the idea of a common area for livestock and agricultural products, plus largely untested “technological solutions” as a replacement for the backstop. The EU says that is inadequate. Ireland has already rejected an idea raised in preliminary U.K. proposals for customs posts five to 10 miles away from the border.

Johnson said that proposal wasn’t going to be included, but added that it was a “reality” that some checks would be needed to create a “single customs territory” for the U.K.

He said checks could be conducted away from the border, possibly at either end of a shipment’s journey.

“That I don’t think will be onerous, it certainly wouldn’t involve infrastructure,” he told Sky News.

That still falls short of the seamless border that exists today. Irish Prime Minister Leo Varadkar said that under May, the U.K. government “promised no hard border or associated controls or checks and we expect the British government to honor that promise.”

“People here don’t want a customs border between north and south and no British government should seek to impose customs posts against the will of the people on the island of Ireland,” he said in the Irish parliament. 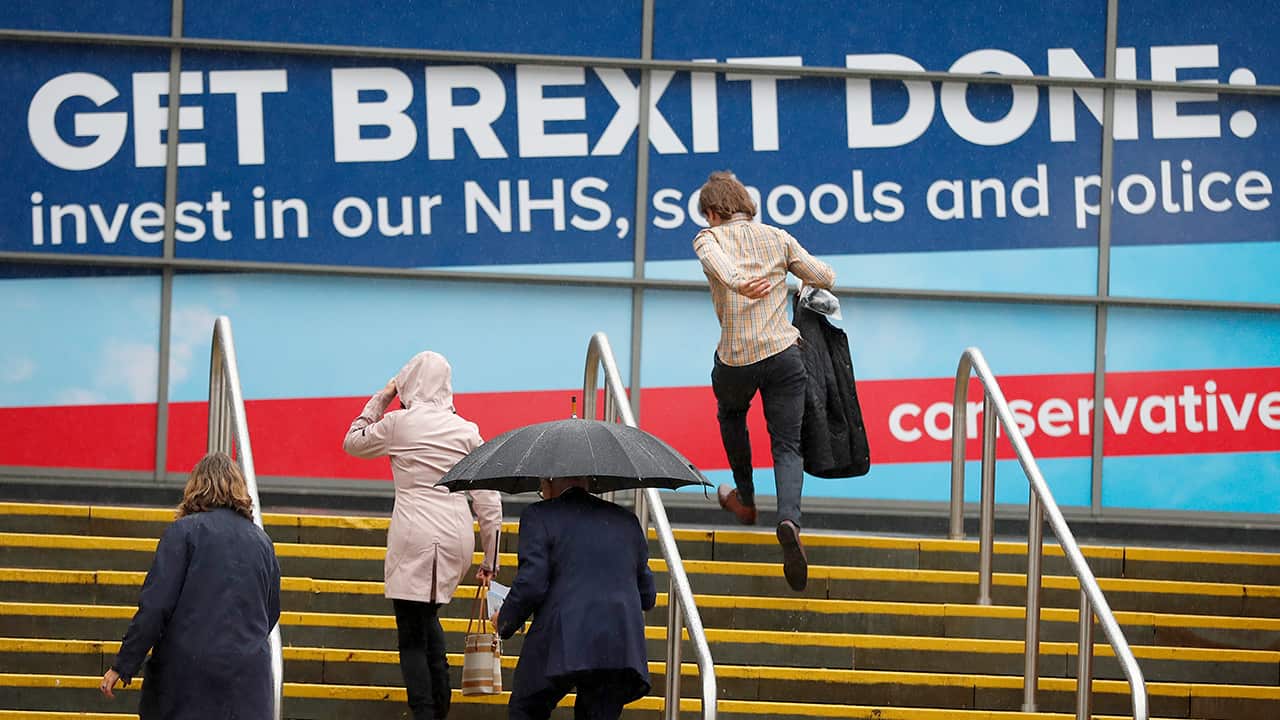 Delegates arrive in heavy rain at the Conservative Party Conference in Manchester, England, Tuesday, Oct. 1, 2019. Britain’s Prime Minister Boris Johnson said Tuesday that his government prepared at last to make firm proposals for a new divorce deal with the European Union. Britain is due to leave the 28-nation bloc at the end of this month, and EU leaders are growing impatient with the U.K.’s failure to set out detailed plans for maintaining an open border between Northern Ireland and Ireland — the key sticking point to a deal. (AP Photo/Frank Augstein)

Johnson Attempting to Energize His Party

Johnson insists he wants to strike a deal with the EU to replace May’s rejected Brexit agreement. He also says the U.K. can handle any bumps that come from tumbling out of the bloc without a deal, which would mean the instant imposition of customs checks and other barriers between Britain and the EU, its biggest trading partner.

But the U.K. government and businesses say the disruptions would be substantial.

Trade Minister George Freeman told delegates at the Conservative conference that “if we leave without a deal, it’s going to be very bumpy.” He said the flow of trade across the Channel between the English port of Dover and the French port of Calais — the U.K.’s most important trade route — could be cut in half as customs and vehicle checks were introduced.

At the annual conference, Johnson is attempting to energize his party with all the bold policies he says the government will deliver once the U.K. manages to “Get Brexit Done” — from more money for police, roads and housing to a big hike in the minimum wage. Tuesday’s big theme, law and order, was slightly undermined when a Conservative lawmaker was ejected from the conference over an altercation that saw police swoop on a convention center lounge.

The costly policy promises, which break with a decade of deficit-slashing austerity by Johnson’s Conservative predecessors, are also designed to appeal to voters in a national election that looks likely to be called within weeks.

But he is dogged by allegations that he handed out perks to a female friend’s business while he was mayor of London and groped the thigh of a female journalist at a lunch two decades ago. Johnson denies impropriety in both cases — though said Tuesday that he couldn’t remember the lunch in question.

Johnson Has to Convince the Wider Voting Public

He also suggested the allegations against him might motivated by political opponents trying “to knock the government off course.”

Johnson is popular with many Conservative members, who welcome his energy and optimism after three years of Brexit gridlock under May. Some, though, have qualms about his personal conduct and his divisive tactics, which include using words like “surrender” and “betrayal” about opponents of Brexit.

“We are no longer the party of Churchill. We are more the party of Trump.” — David Gauke, a former Cabinet minister kicked out of the party group in Parliament

David Gauke — a former Cabinet minister kicked out of the party group in Parliament for voting against the government over Brexit — said he feared that under Johnson, the Tories were becoming “a much more aggressive, much more confrontational, much more divisive party.”

But many conference delegates were supportive. Seena Shah, 30, who has been chosen as a Conservative election candidate in London, said she was pro-Brexit, socially liberal and comfortable with Johnson as leader.

“Boris, when he walks into a room, it fills with energy,” she said. “He is a fantastic leader. We need somebody who is going to keep the optimism up, and he is doing that very well.”

Now Johnson just has to convince the wider voting public that despite tensions over Brexit, he can be a unifying figure.

“The old generous-hearted, loving mayor of London — that person has not gone away,” Johnson told the BBC. “But we are in a position where the only way we can take this country forward and unite our country again is to get Brexit done.”