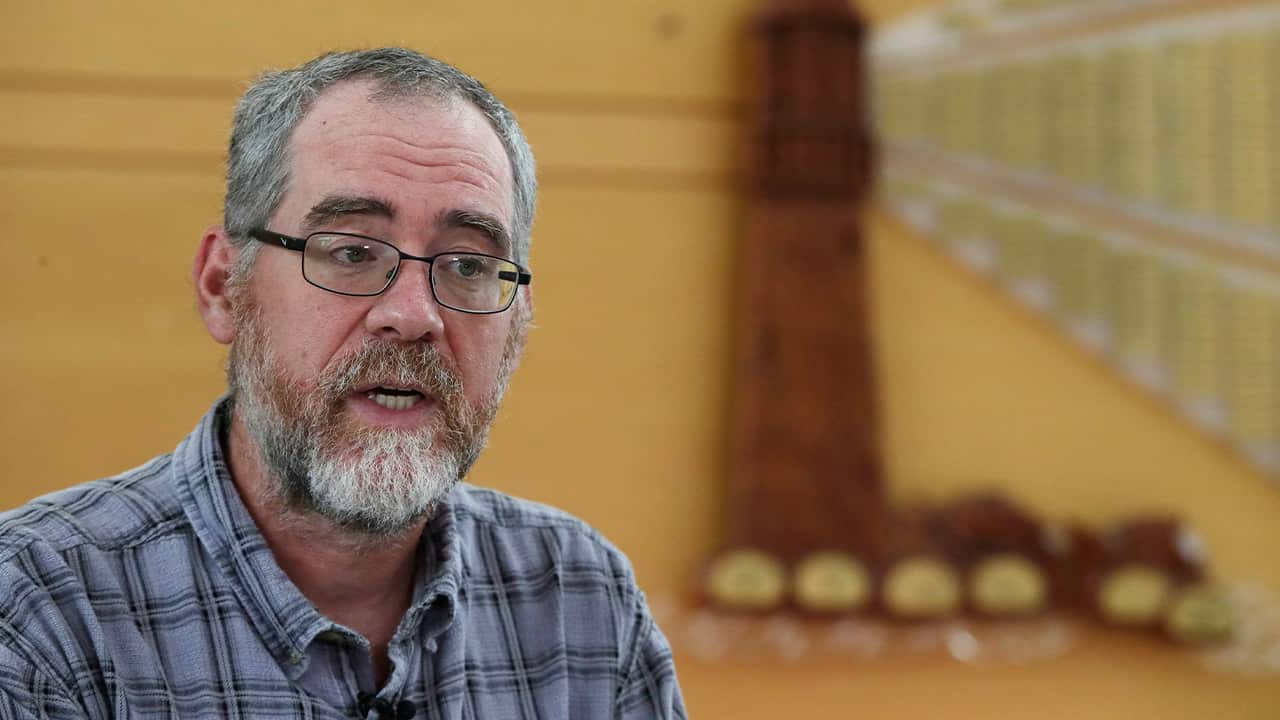 BLOCK ISLAND, R.I. — The winds are blowing fair for America’s wind power industry, making it one of the fastest-growing U.S. energy sources.
Land-based turbines are rising by the thousands across America, from the remote Texas plains to farm towns of Iowa. And the U.S. wind boom now is expanding offshore, with big corporations planning $70 billion in investment for the country’s first utility-scale offshore wind farms.

The Interior Department surprised and alarmed wind industry supporters in August, when the agency unexpectedly announced it was withholding approval for the country’s first utility-scale offshore wind project, a $2.8 billion complex of 84 giant turbines. Slated for building 15 miles off Martha’s Vineyard, Vineyard Wind has a brisk 2022 target for starting operations. Its Danish-Spanish partners already have contracts to supply Massachusetts electric utilities.
Investors backing more than a dozen other big wind farms are lined up to follow Vineyard Wind with offshore wind projects of their own. Shell’s renewable-energy offshoot is among the businesses ponying up for federal leases, at bids of more than $100 million, for offshore wind farm sites.
The Interior Department cited the surge in corporate interest for offshore wind projects in saying it wanted more study before moving forward. It directed Vineyard Wind to research the overall impact of the East Coast’s planned wind boom.
Interior Department spokesman Nicholas Goodwin said offshore energy remains “an important component” in the Trump administration’s energy strategy. But the strategy includes “ensuring activities are safe and environmentally responsible,” Goodwin said in a statement.
Wind power now provides a third or more of the electricity generated in some Southwest and Midwest states. And New York, New Jersey and other Eastern states already are joining Massachusetts in planning for wind-generated electricity.
Along with the U.S. shale oil boom, the rise in wind and solar is helping cushion oil supply shocks like the recent attack on Saudi oil facilities.

‘We Hope That This Is a Speed Bump, and Certainly Not a Roadblock’

But the Interior Department’s pause on the Vineyard Wind project sent a chill through many of the backers of the offshore wind boom. Critics contrast it with the Republican administration’s moves to open up offshore and Arctic areas to oil and gas development, despite strong environmental concerns. 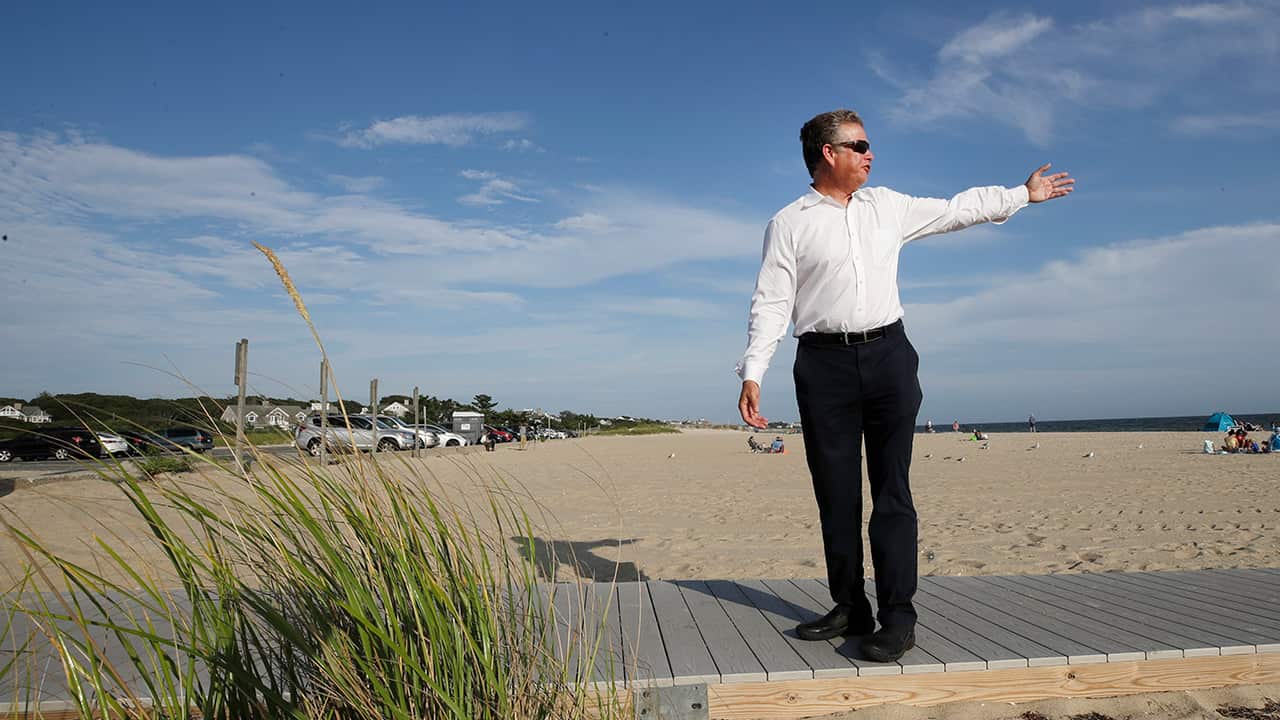 In this Aug. 21, 2019 photo, Andrew Gottlieb, executive director of the Association to Preserve Cape Cod, indicates where the proposed Vineyard Winds’ buried energy cables would stretch from offshore wind turbines, through the ocean, under the sand and parking lot at Covell Beach in Centerville, Mass. to a landing point onshore. The cables would then extend to a grid connection point inland. But as Trump has made clear how much he hates wind turbines, all the offshore wind projects, including the nation’s first utility-scale offshore wind project, an 84 turbine, $2.8 billion wind farm slated to rise 15 miles off Martha’s Vineyard, have stalled. (AP Photo/Elise Amendola)

On Land, the Wind Boom Already Is Well Established

Federal fisheries officials have been among the main bloc calling for more study, saying they need to know more about the impacts on ocean life. Some fishing groups still fear their nets will tangle in the massive turbines, although Vineyard Wind’s offer to pay millions of dollars to offset any harm to commercial fishing won the support of others. At least one Cape Cod town council also withheld support.
A rally for Vineyard Wind after the Interior Department announced its pause drew local Chamber of Commerce leaders and many other prominent locals. Massachusetts’ Republican governor, Charlie Baker, has been traveling to Washington and calling Interior Secretary David Bernhardt to try to win his support.
At Cape Cod Community College in West Barnstable, instructor Chris Powicki’s Offshore Wind 101 classes and workshop have drawn nuclear and marina workers, engineers, young people and others. People are hoping wind will provide the kind of good-paying professions and trades they need to afford to stay here, Powicki says.
“Cape Cod has always been at the end of the energy supply line, or at least ever since we lost our dominance with the whale oil industry” after the 19th century, the community college instructor said. “So this is an opportunity for Cape Cod to generate its own energy.”
On land, the wind boom already is well established. By next year, 9% of the country’s electricity is expected to come from wind power, according to the U.S. Energy Information Administration. The wind industry already claims 114,000 jobs, more than twice the number of jobs remaining in U.S. coal mining, which is losing out in competition against cleaner, cheaper energy sources despite the Trump administration’s backing of coal.
The Trump animosity to wind power has gone beyond words in some states, especially in Ohio. A Trump campaign official was active this summer in winning a state ratepayer subsidy for coal and nuclear that also led to cutting state incentives for wind and solar.

Wind Is Booming Most Strongly in States That Voted for Trump

But despite the steady gales of condemnation from the country’s wind-hater in chief, wind is booming most strongly in states that voted for Trump.