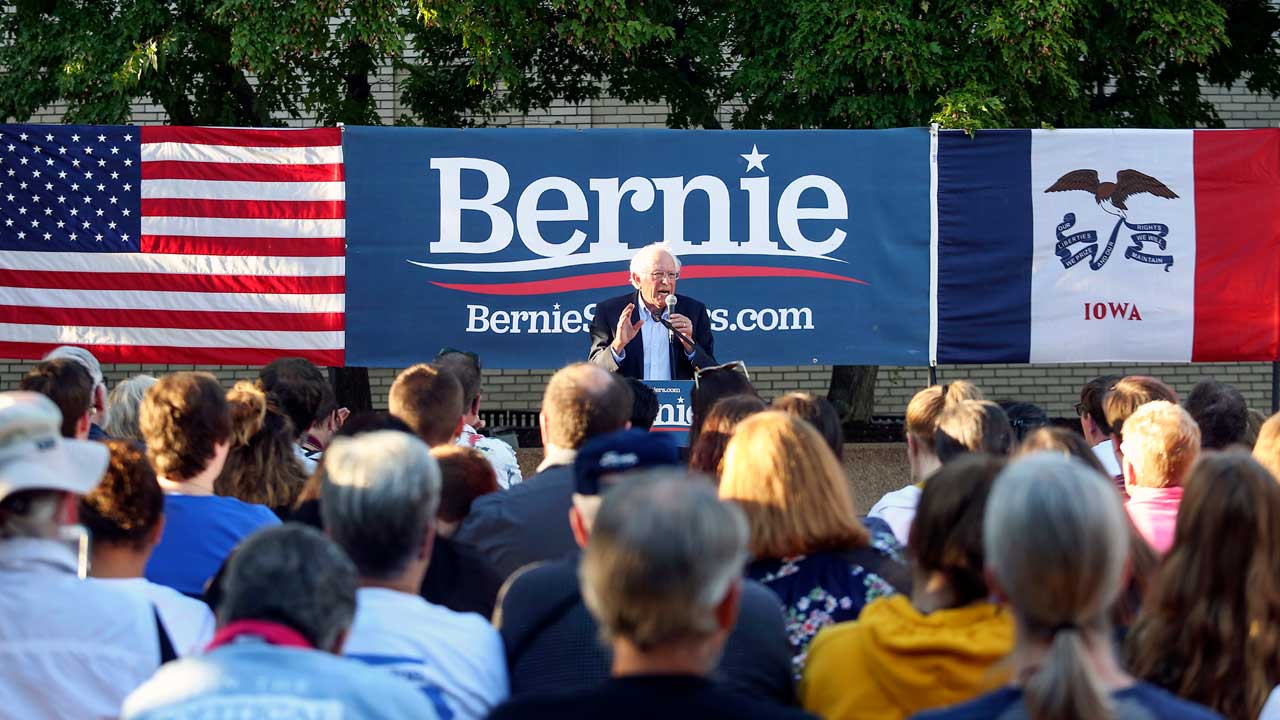 WASHINGTON — Bernie Sanders announced on Tuesday a plan to tax the nation’s wealthiest households, saying it will generate more than $4 trillion over the next decade and substantially reduce billionaires’ fortunes — his version of Democratic presidential rival Elizabeth Warren’s signature proposal.
Sanders, a senator from Vermont, and Warren, a senator from Massachusetts, are longtime friends who agree on many major policy issues and have so far steadfastly refused to criticize one another on the campaign trail. But the dueling “wealth taxes” signal they may have to compete more directly for support from the Democratic party’s liberal wing.

The plan unveiled by Sanders seeks a 1% levy on households worth more than $32 million and proposes tax rates that would increase for wealthier people, up to 8% for $10 billion-plus fortunes.
The tax would affect about 180,000 households, or around 0.1% nationwide, according to Gabriel Zucman and Emmanuel Saez, economists at the University of California at Berkeley, who estimated it would raise about $4.35 trillion in government revenue by the 2028 budget year.
“We are going to take on the billionaire class, substantially reduce wealth inequality in America and stop our democracy from turning into a corrupt oligarchy,” Sanders said in a statement.
Warren proudly declares herself the candidate who “has a plan” for everything and supports a 2% wealth tax on households worth more than $50 million and has become so well known for the issue that large crowds at her rallies around the country have lately interrupted her speeches to chant “2 cents!” reminiscent of people chanting “Build the Wall” at President Donald Trump’s campaign events. Her campaign estimates the levy would raise $2.75 trillion over 10 years.

Sanders’ plan goes further because it starts on fortunes worth at least $32 million, far lower than Warren’s plan’s threshold. Warren also proposes increasing the wealth tax up to 3% on any net worth of more than $1 billion, while Sanders’ tax rates don’t top out until 8% for the richest Americans.
Zucman and Saez estimate that if Sanders’ system had been implemented in 1982, the wealth controlled by the richest Americans listed on the Forbes 400 “would be only 40% of what it is today.”
“A progressive wealth tax is the most direct policy tool to curb the growing concentration of wealth in the United States,” the economists wrote in a letter analyzing Sanders’ proposal.
Still, Kyle Pomerleau, chief economist at the conservative Tax Foundation, called Sanders’ proposal more “extreme” than what Warren has proposed. He said an 8% tax on assets of more than $10 billion would likely be higher than the investment returns on those holdings, such that billionaires would have a “large incentive to avoid the tax.”
The proposed tax might also prove an unreliable funding stream for Sanders’ signature issue, the “Medicare for All” universal health insurance program, which Warren also supports.
“A wealth tax of this magnitude would tend to shrink the amount of wealth held by billionaires over time,” Pomerleau said. “So he may be able to make his plans add up in the short run, but it becomes more questionable over time as the wealth tax raises less and less.”

Sanders says that’s the point, though, vowing that reducing “historic levels of inequality in America” can “rebuild” the nation’s middle class.
His plan comes as Warren has spent months on the rise and even begun outpacing him in some recent polls. A poll released this weekend by The Des Moines Register, CNN and Mediacom showed her in a tight race for first place with former Vice President Joe Biden in make-or-break Iowa.
In a memo emailed to supporters on Tuesday, Warren’s campaign detailed how it intends to keep the momentum going.
Warren is launching an advertising buy worth $10 million in the four states that kick off the Democratic presidential nominating process: Iowa, New Hampshire, Nevada and South Carolina. Roger Lau, Warren’s campaign manager, wrote that the buy “will be more digital than old-school broadcast television” and mostly feature “in-house staff to produce videos and ads rather than adopt the consultant-driven approach of other campaign.”
Warren’s team also plans to expand its door-knocking and calling and texting of would-be supporters, while hiring state directors and organizers in many states that have primaries and caucuses in March, like delegate-rich California and Illinois. Her campaign is also vowing to staff up in places it describes as critical for maintaining Democratic control of the House and taking back the Senate, such as Maine and Georgia.
“We’ve released dozens of plans in the past seven months,” Lau wrote, “but they’re really one big, simple plan: to break the stranglehold of corruption on Washington and put political and economic power in the hands of the people, where it belongs.”