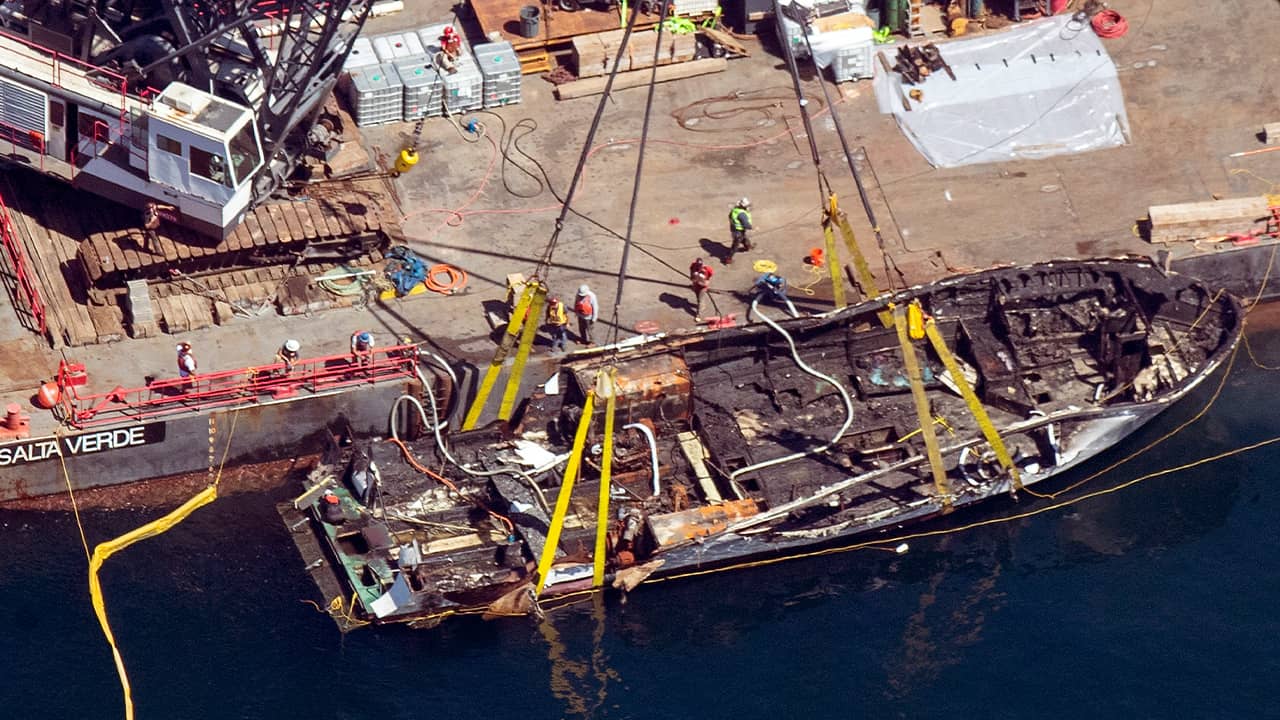 LOS ANGELES — One was a ship in name only, an artist commune set up in an Oakland warehouse. The other was a bona fide boat afloat on the ocean off Santa Barbara.
Both became fiery death traps for a combined 70 souls, two of the worst disasters in modern California history.

The Charge Would Likely Be Involuntary Manslaughter

That would violate Coast Guard regulations requiring a roving night watch and could trigger charges under what’s known as the federal seaman’s manslaughter statute, which carries penalties of up to 10 years in prison per count if a captain or crew member is convicted of negligence or misconduct.
Unintentional deaths in building infernos, crane collapses and nightclub stampedes have often led to manslaughter charges.
In California and many other state courts, the charge would likely be involuntary manslaughter. That requires showing someone acted with gross negligence, meaning they didn’t use caution and took risks a reasonable person would not have taken under the same circumstances.
The little-used boating manslaughter law only requires showing the simple negligence that’s required in injury lawsuits, meaning someone should have recognized the risk and acted differently.
“It is unusual to have any criminal statute where the intent to be proven is simply that of negligence,” said attorney Michael Lipman, who represents Jerry Boylan, the captain of the Conception.
He said his client was “emotionally devastated” but declined to discuss the investigation.
Federal prosecutors would have a lower standard of proof than the district attorney who tried to convict the leader and a tenant of the Ghost Ship artist enclave of involuntary manslaughter in the deaths of 36 people during a Dec. 2, 2016, electronic music show.
Derick Almena rented the industrial building and is accused of illegally converting it into an unlicensed entertainment venue and artist live-work space. Max Harris collected rent and scheduled concerts.

No Records That the Warehouse Had Been Inspected Every Year

The pair made the building into a labyrinth loaded with flammable furniture and a rickety stairway that gave little chance for escape, prosecutors said.

Captain Could Be Criminally Liable for Crew Actions That Caused Deaths

After visiting a dive boat just like the Conception, she cited how difficult it was to reach an escape hatch in the bunkroom — a design that has routinely met regulations.
While defense attorneys might try to blame insufficient regulations or a shoddy inspection, it wouldn’t necessarily absolve the captain or crew, said Carolyn Ramsey, a law professor at the University of Colorado.
“It’s not a defense if the government inspectors fail to properly find problems with the boat,” Ramsey said. “The captain is responsible for keeping the boat in a safe condition and providing . ways of escape and rescue in the case of a fire.”
The captain also could be criminally liable for crew actions that caused deaths, Ramsey said. Executives of the boat company could be charged if prosecutors can show fraud was involved.

In their favor, Coast Guard inspection records show the boat passed its two most recent inspections with no safety violations. Previous customers said Truth Aquatics Inc., which owns the vessel, and the captains of its three boats were safety conscious.
But that doesn’t necessarily mean the boat was properly maintained and had the needed safety equipment or that passengers got proper safety briefings before setting off Aug. 31 for a three-day excursion.
A lawsuit filed recently by a crew member, Ryan Sims, who broke his leg when he jumped from the upper deck to escape the flames, said the boat was unsafe and improperly maintained.
“The boat is unseaworthy by nature because it caught fire and sank,” Sim’s attorney, Kurt Arnold, said Thursday. “Part two is you’re always supposed to have someone on watch. … So once a fire starts for whatever reason that someone can either take action or get everyone off. That didn’t happen in this case.”
Related Topics:homicideinvestigationmanslaughterOaklandSanta Barbarashiptragedywarehouse
Up Next