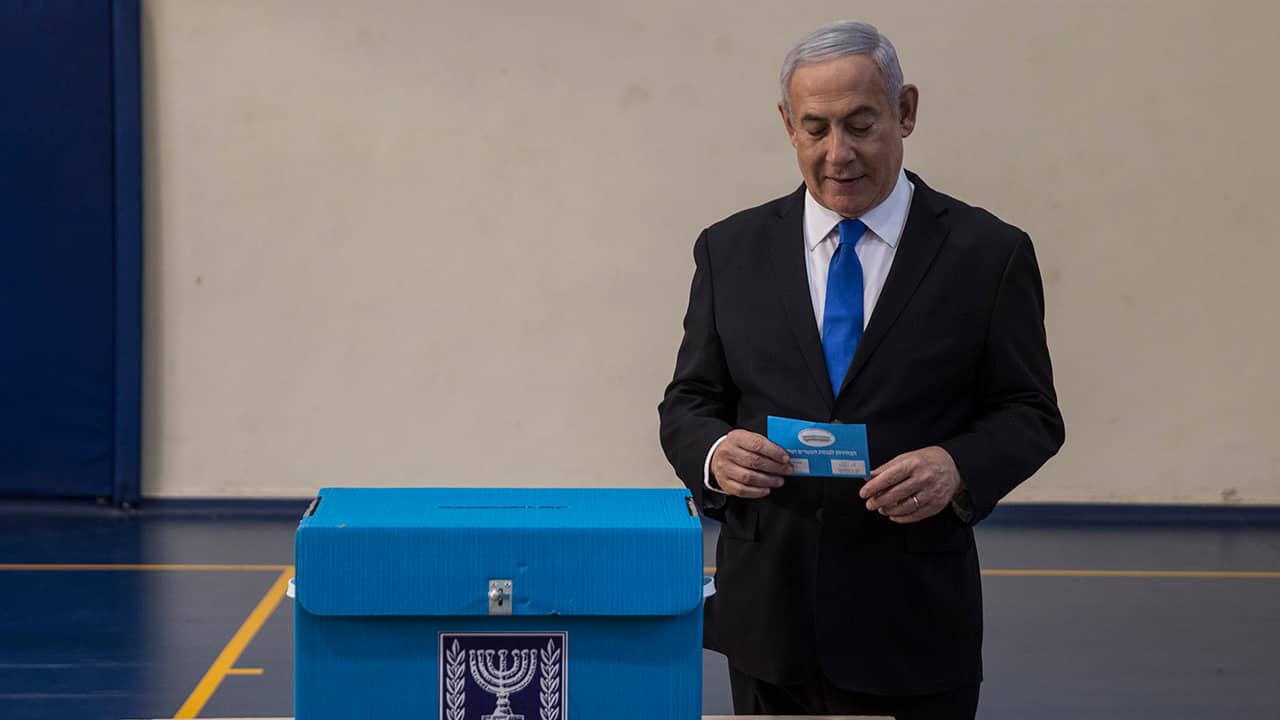 JERUSALEM — In an apparent setback for Prime Minister Benjamin Netanyahu, the longtime Israeli leader on Tuesday fell short of securing a parliamentary majority with his hard-line allies in national elections, initial exit polls showed, putting his political future in question.
Results posted by Israel’s three major TV stations indicated that challenger Benny Gantz’s centrist Blue and White party held a a slight lead over Netanyahu’s Likud party. However, neither party was forecast to control a majority in the 120-seat parliament without the support of Avigdor Lieberman, a Netanyahu rival who heads the midsize Yisrael Beitenu party.
Israeli exit polls are often imprecise and the final results, expected Wednesday, could shift in Netanyahu’s favor. But three stations all forecast similar scenarios.
The apparent deadlock sets the stage for an extended period of uncertainly and complicated political maneuvering, but with Netanyahu in a relatively weaker bargaining position. The parties could be forced into a broad unity government that could push Netanyahu out.
Gantz, a former military chief of staff, has ruled out sitting with a Netanyahu-led Likud at a time when he is expected to be indicted on corruption charges in the coming weeks. Further complicating things, Lieberman refuses to sit in any coalition that includes religious parties that traditionally support Netanyahu.
Attention will now focus on Israel’s president, Reuven Rivlin, who is to choose the candidate he believes has the best chance of forming a stable coalition. Rivlin is to consult with all parties in the coming days before making his decision.

Netanyahu Predicted the Vote Would Be ‘Very Close’

Officials from both Blue and White and Lieberman’s Yisrael Beitenu both said they would seek a broad unity government.

Netanyahu Was Desperate to Secure a Narrow 61-Seat Majority

At the time, Netanyahu appeared to have won another term, with his traditional allies of nationalist and ultra-religious Jewish parties controlling a parliamentary majority.
But Lieberman, his mercurial ally-turned-rival, refused to join the new coalition, citing excessive influence it granted the ultra-Orthodox Jewish parties. Without a parliamentary majority, Netanyahu dissolved parliament and called a new election.
The initial exits polls positioned Lieberman once again in the role of kingmaker. Lieberman has promised to avoid a third election and force a secular unity government between Likud and Blue and White that would leave out the ultra-Orthodox parties.
Another factor working against Netanyahu was that the fringe, ultranationalist Jewish Power faction, led by followers of the late rabbi Meir Kahane, who advocated expelling Arabs from Israel and creating a Jewish theocracy, failed to cross the electoral threshold. That dropped the support of Netanyahu’s overall right-wing bloc.
Netanyahu was desperate to secure a narrow 61-seat majority in parliament with his hard-line religious and nationalist allies, who were expected to approve legislation that would grant him immunity from prosecution.
Israel’s attorney general has recommended pressing criminal charges against Netanyahu in three separate corruption cases, pending a long delayed pre-trial hearing scheduled next month. Without immunity, Netanyahu would be under heavy pressure to step aside.
With his career on the line, Netanyahu has campaigned furiously and taken a late hard turn to the right in hopes of rallying his nationalist base. 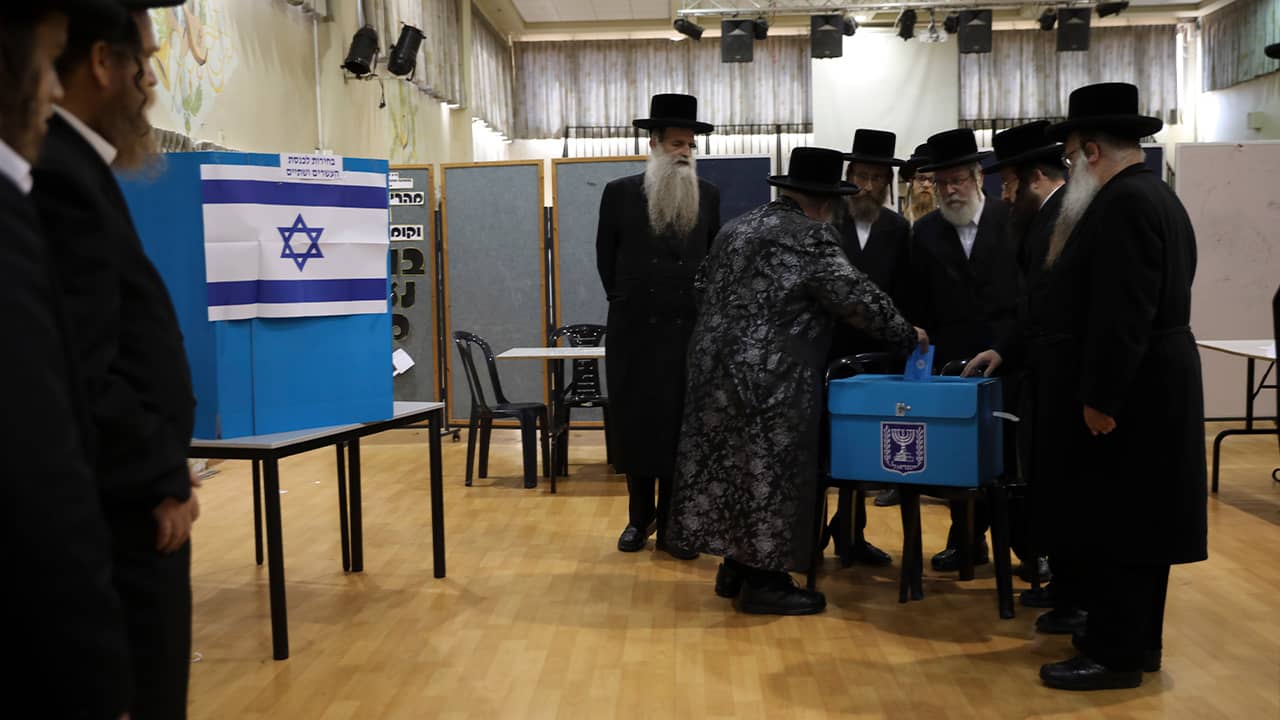 He beseeched supporters to vote to stave off the prospect of a left-wing government he says will endanger Israel’s security. He has accused his opponents of conspiring with Arab politicians to “steal” the election, a message that has drawn accusations of racism and incitement.

A centerpiece of Netanyahu’s eleventh-hour agenda has been the pledge to extend Israeli sovereignty over parts of the West Bank and to annex all the Jewish settlements there, something Netanyahu has refrained from doing during his decade-plus in power because of the far-reaching diplomatic repercussions.
His proposal sparked a cascade of international condemnation, including from Europe and Saudi Arabia, an influential Arab country that has quiet, unofficial ties with Israel. Jordan’s King Abdullah II said Tuesday the proposed annexation would be a “disaster” for the region.
The U.S., however, has had a muted reaction, suggesting Netanyahu coordinated his plan with the Americans ahead of time.
Netanyahu flaunted his close ties to President Donald Trump, who has promised to unveil a peace plan after the election.
Trump chimed in with his prediction, telling reporters at the White House on Monday that it “will be a very interesting outcome. It’s gonna be close.”
Netanyahu also claimed to have located a previously unknown Iranian nuclear weapons facility and said another war against Gaza militants is probably inevitable.
In some of his TV interviews, the typically reserved Netanyahu has raised his voice and gestured wildly as he warned of his imminent demise.