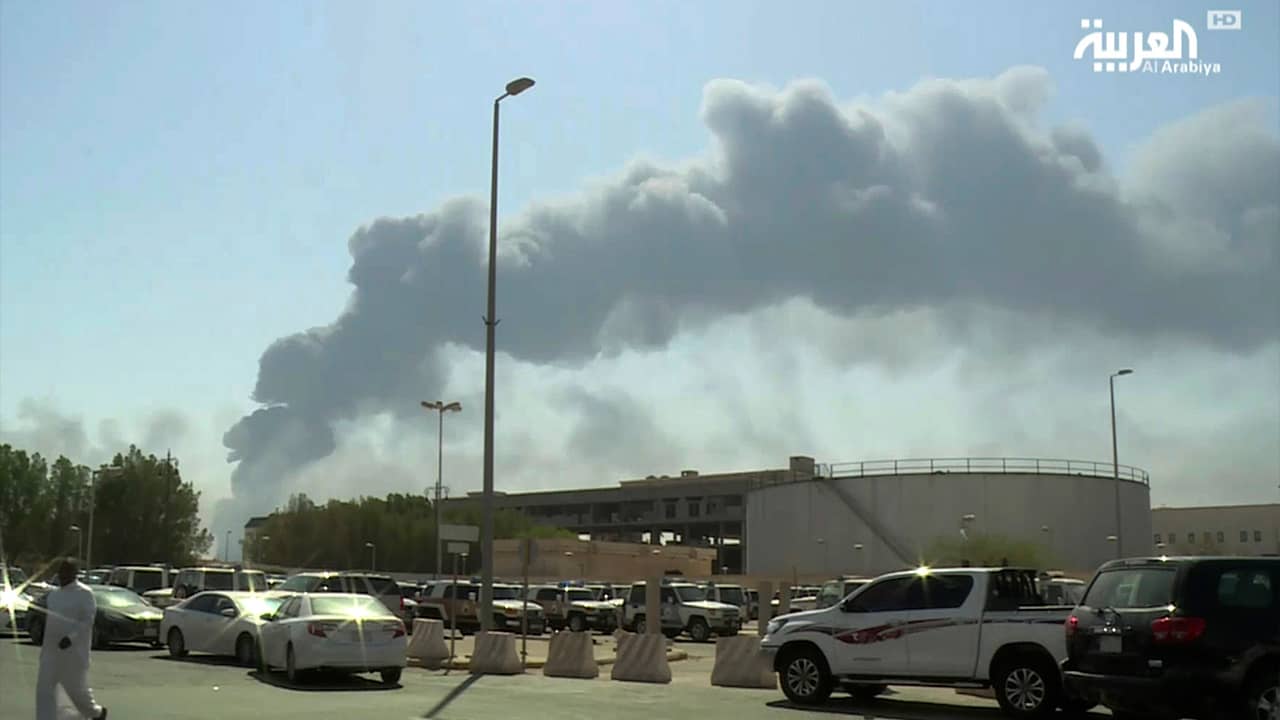 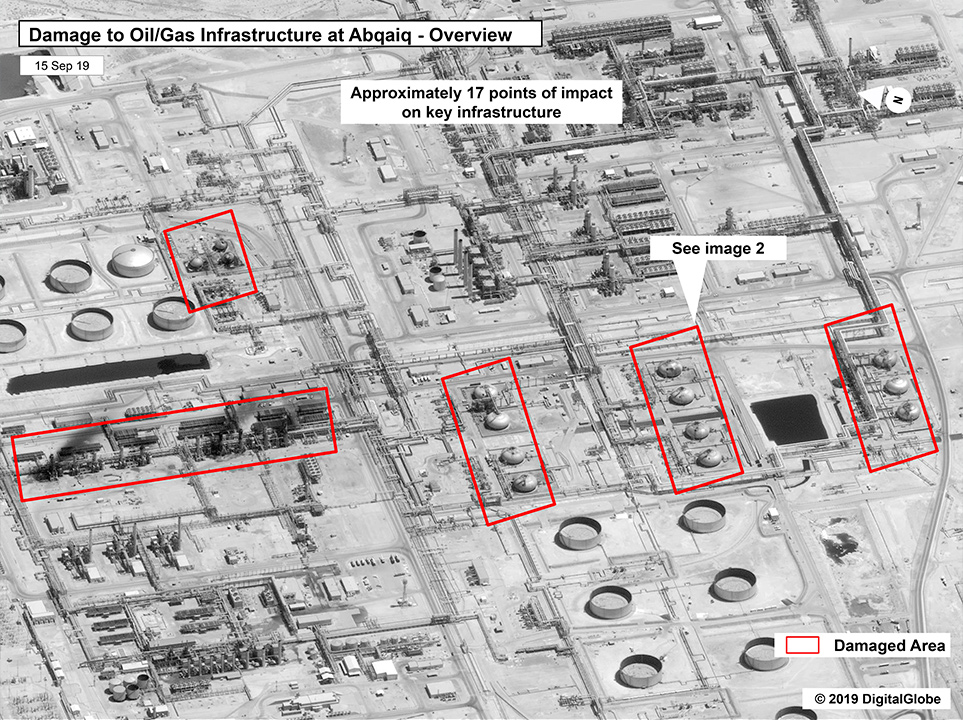 This image provided on Sunday, Sept. 15, 2019, by the U.S. government and DigitalGlobe and annotated by the source, shows damage to the infrastructure at Saudi Aramco’s Abaqaiq oil processing facility in Buqyaq, Saudi Arabia. The drone attack Saturday on Saudi Arabia’s Abqaiq plant and its Khurais oil field led to the interruption of an estimated 5.7 million barrels of the kingdom’s crude oil production per day, equivalent to more than 5% of the world’s daily supply. (U.S. government/Digital Globe via AP)

Attack Halted Production of 5.7 Million Barrels of Crude a Day

The new violence has led to fears that further action on any side could rapidly escalate a confrontation that’s been raging just below the surface in the wider Persian Gulf in recent months. There already have been mysterious attacks on oil tankers that Washington blames on Tehran, at least one suspected Israeli strike on Shiite forces in Iraq, and the downing of a U.S. military surveillance drone by Iran.
Those tensions have increased ever since Trump pulled the U.S. out of Iran’s 2015 agreement with world powers that curtailed Iranian nuclear activities and the U.S. re-imposed sanctions that sent Iran’s economy into freefall.
Benchmark Brent crude prices gained nearly 20% in the first moments of trading Monday before settling down to over 10% higher as trading continued. A barrel of Brent traded up $6.45 to $66.67.
That spike represented the biggest percentage value jump in Brent crude since the run-up to the 1991 Gulf War that saw a U.S.-led coalition expel Iraqi dictator Saddam Hussein’s forces from Kuwait.
U.S. benchmark West Texas crude was up around 10%. U.S. gasoline and heating oil similarly were up.
The attack halted production of 5.7 million barrels of crude a day, more than half of Saudi Arabia’s global daily exports and more than 5% of the world’s daily crude oil production. Most of that output goes to Asia.
Yemen’s Houthi rebels, who have been targeted by a Saudi-led coalition since March 2015 in a vicious war in the Arab world’s poorest country, maintain they launched 10 drones that caused the extensive damage. They reiterated that Saudi oil sites remained in their crosshairs, warning foreign workers to stay away.
U.S. officials say that the damage done to the north-facing parts of the facilities suggest the attack instead came across the Persian Gulf from Iraq or Iran. American officials have yet to offer substantial evidence to support their claims, though Iran in the past has relied on hard-to-attribute attacks or proxy forces to launch assaults against its enemies.

At a news conference, Saudi military spokesman Col. Turki al-Maliki said, “All the indications and operational evidence, and the weapons that were used in the terrorist attack, whether in Buqayq or Khurais, indicate with initial evidence that these weapons are Iranian weapons.” 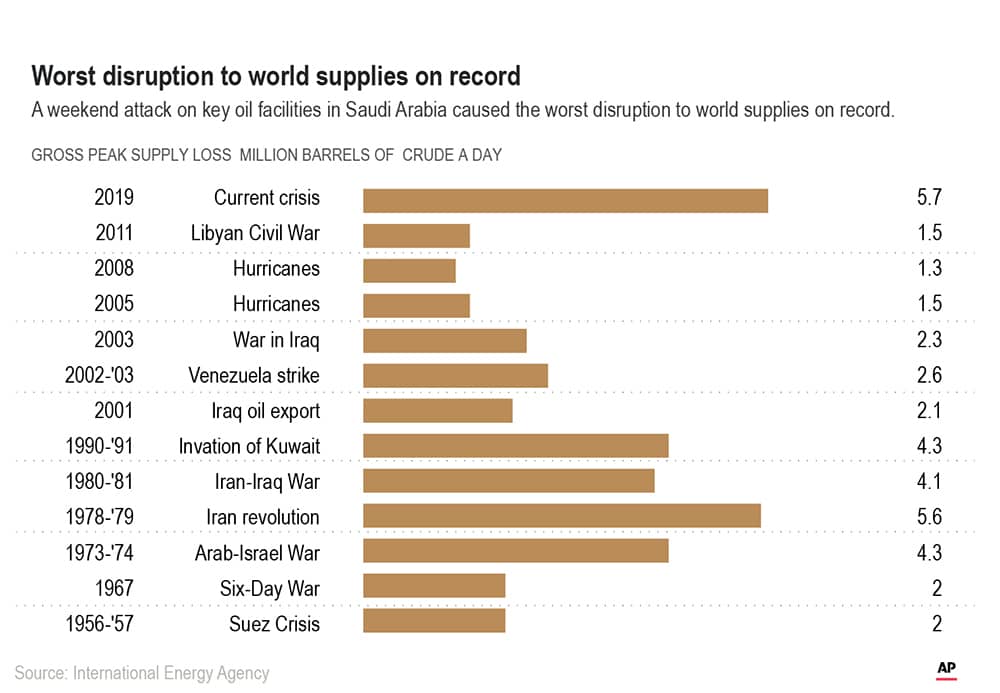 Saudi Outage Has Sparked Concern Among Analysts of Prices

U.S. satellite photos released overnight appeared to show the attack on Abqaiq, the world’s largest oil processing facility, may have struck the most sensitive part of the facility, its stabilization area. The Washington-based Center for Strategic and International Studies has said the area includes “storage tanks and processing and compressor trains — which greatly increases the likelihood of a strike successfully disrupting or destroying its operations.”
At 5.7 million barrels of crude oil a day, the Saudi disruption would be the greatest on record for world markets, according to figures from the Paris-based International Energy Agency. It just edges out the 5.6 million-barrels-a-day disruption around the time of Iran’s 1979 Islamic Revolution, according to the IEA.
Though the world’s overall energy demands in the past were smaller, the Saudi outage has sparked concern among analysts of prices pushing to $80 a barrel and beyond. Publicly traded airlines, whose major costs include jet fuel, suffered globally. That could in turn push up prices on everything from travel to a gallon of gas at the pump.
Saudi Arabia has pledged that its stockpiles would keep global markets supplied as it rushes to repair damage at the Abqaiq facility and its Khurais oil field. However, Saudi Aramco has not responded publicly to questions about its facilities.
Stabilization means processing so-called sour crude oil into sweet crude. That allows it to be transported onto transshipment points on the Persian Gulf and the Red Sea, or to refineries for local production.
Fernando Ferreira, the director of geopolitical risk at the Washington-based Rapidan Energy Group, said rebuilding that infrastructure “will take many months.”