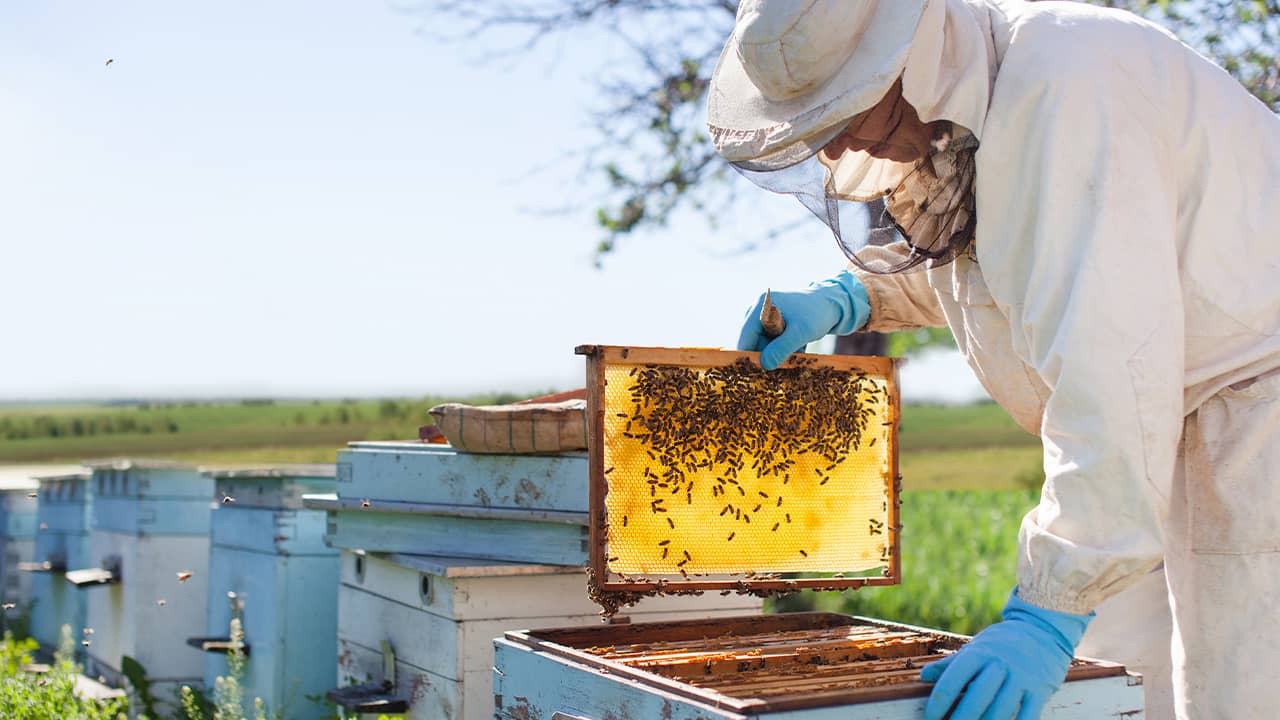 MANCHESTER, N.H. — Gently lifting a wooden frame containing dozens of Italian honeybees, Vince Ylitalo seemed transfixed as he and several other veterans inspected the buzzing insects.
“This is really cool,” he said, pointing to a bee with blobs of orange pollen on its hind legs.

Similar Stories Have Been Heard From Other Beekeeping Programs

“It gives you a chance to shut down and not think about the outside world. It shows me there is a way to shut my brain down to get other things accomplished,” Zimmermann said. “Before, my mind would be filled with thoughts constantly and I wasn’t accomplishing daily tasks.”
While some of the programs are geared to giving soldiers the skills to become farmers and commercial beekeepers, others aim to address the challenges facing those returning home from Afghanistan and Iraq with brain injuries, post-traumatic stress disorder and other mental health issues. The programs are careful to say that beekeeping is just one of several benefits that could help a troubled veteran.
“The anecdotes we have heard are fantastic,” said Alicia Semiatin, who heads the mental health program in Manchester. “Folks find that it is really something that they benefit from at the time they are doing the beekeeping and the benefits seems to be carrying over not only for days but weeks afterward. What more could you ask for from treatment than something to that degree?”

Similar stories have been heard from beekeeping programs from Brockton, Massachusetts, to Reno, Nevada. Those running the programs said there is plenty of anecdotal evidence that beekeeping is making a difference for those who spend time managing hives and harvesting honey. Beekeeping gives them a sense of purpose, helps them relax and allows them to block out dark thoughts, they said.
“Beekeeping affords us the opportunity to really kind of engage in a different way with the natural world,” said Adam Ingrao, a fourth-generation soldier who runs Heroes to Hives through Michigan State University Extension. “You’re not thinking about what happened in Afghanistan or Iraq. You’re thinking about what’s happening right here, right now.”
Ford Motor Co. is providing space to Heroes to Hives at Henry Ford’s old farm near Ann Arbor. The free program provides a nine-month beekeeping course to veterans, about 80% of whom have a disability.

Each Veteran Gets Two Hives to Manage for the Year

In Reno, Ginger Fenwick started Bees4Vets with her husband, Daniel, in 2018 after spotting a 1919 pamphlet written by the government that advocated beekeeping for veterans returning from World War I with shell shock. Bees4Vets trains 10 veterans a year to manage some of its roughly 30 hives at the agricultural experiment station at the University of Nevada, Reno and resident’s backyards in nearby Sparks.