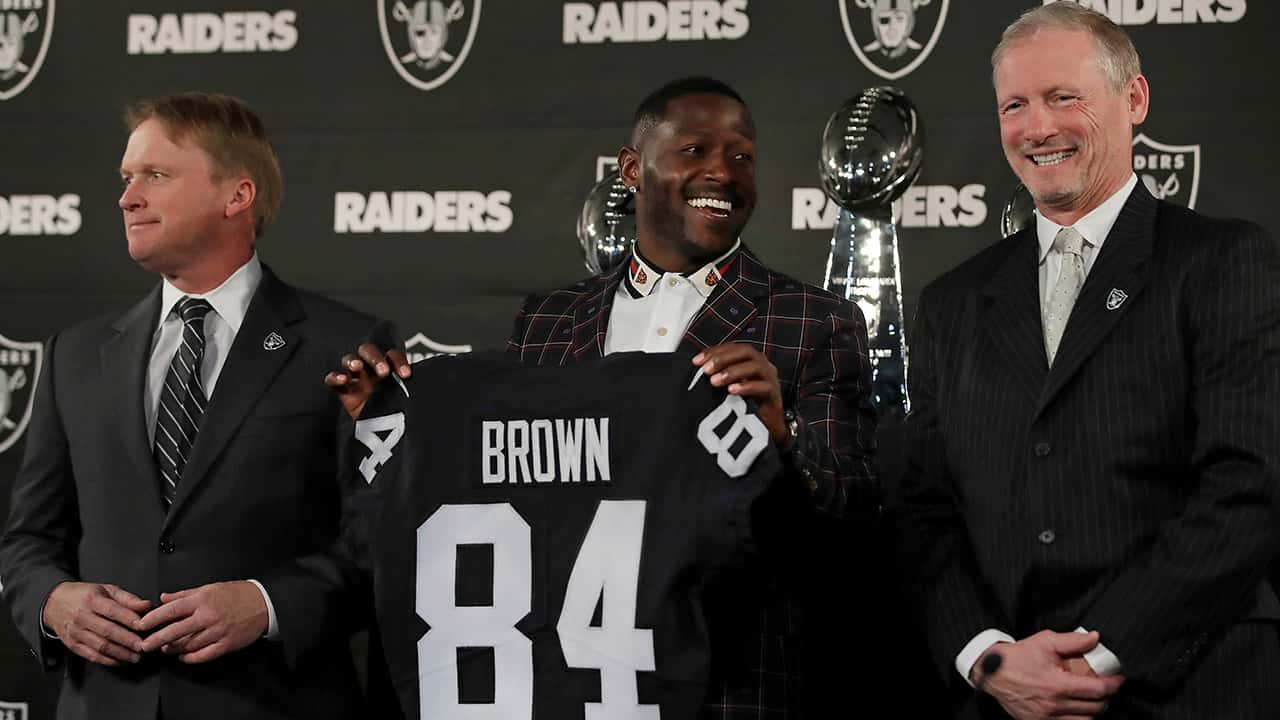 OAKLAND — The Oakland Raiders once again head into a season opener having just cut ties with their most talented player.

But after a tumultuous six-month tenure that included a bizarre foot injury that sidelined him for the beginning of training camp, a fight with the NFL over his helmet, a missed practice and walkthrough that led to fines, social media complaints, and then finally a run-in with Raiders general manager Mike Mayock that resulted in another fine and the voiding of $29 million in contract guarantees, Brown asked for and was granted his release on Saturday.
Just hours later, Brown agreed to a one-year deal with the New England Patriots as the Raiders moved on to prepare for their opener.

“It sucks that he’s not here, but he made that decision,” said receiver Tyrell Williams, who becomes Derek Carr’s top target in Brown’s absence. “We’re going to go out there and play hard and play well.”
The Raiders acquired Brown from Pittsburgh back in March for third and fifth-round draft picks and gave him a new three-year contract worth $50.125 million.
That seemed a small price to pay for a player whose 686 catches and 9,145 yards receiving since 2013 were the most ever for a receiver in a six-year span.
But it didn’t take long for the Raiders to see why the Steelers were so willing to part with the four-time All-Pro as his time in Oakland was filled with drama.

Raiders Downplay Any Distractions over Brown

“You can’t put much thought into it,” linebacker and captain Tahir Whitehead said. “He didn’t want to be here. We tried to support him, but at the end of the day, the rest of the guys were thinking team first. That’s the type of mentality you need. If you don’t possess that type of mentality then it’s not going to work out.”


“He didn’t want to be here. We tried to support him, but at the end of the day, the rest of the guys were thinking team first. That’s the type of mentality you need.” — linebacker and captain Tahir Whitehead
The Raiders maintain that the Brown summer-long saga didn’t serve as a distraction at all, even as the will-he-play or won’t-he-play question dominated the talk in the days leading up to the game.
They spent much of training camp with Brown absent either because of the frostbite in his feet suffered in a cryotherapy accident in France or over his frustration about the NFL not allowing him to wear his preferred helmet.
“AB is not tackling for us when we’re playing defense,” linebacker and captain Vontaze Burfict said. “Our job is to go out there and stop them from scoring. That’s all we have on our plate.”
The Broncos tried not to get too caught up in the drama surrounding Brown from the reports of a possible suspension on Thursday to his return to the team the following day to his release two days before the opener.
While his absence makes Denver’s job a bit easier, some of the defenders were also looking forward to the challenge of facing one of the game’s most dangerous receivers.
“I think it’s unfortunate they couldn’t get it right, whatever is going on over there,” cornerback Chris Harris Jr. said. “Definitely have been preparing for the competition all offseason and to this year. I wish everybody could’ve gotten a chance to see it.”
Related Topics:Antonio BrownDenver BroncosJon GrudenKhalil MackOakland Raidersseason opener
Up Next

Rested and Revived, The Black Keys Return After 5-Year Break