WASHINGTON — Nearly three-quarters of Americans see weather disasters, like Hurricane Dorian, worsening and most of them blame global warming to some extent, a new poll finds.

The Associated Press-NORC Center for Public Affairs Research survey shows 72% of Americans think catastrophic weather is more severe, while 4% see it as less nasty. About one-quarter say those disasters are about as extreme as they always were.

Half of those who think weather disasters are worsening say it’s mainly because of man-made climate change, with another 37% who think natural randomness and global warming are equally to blame.

The poll was conducted in mid-August before Dorian formed, pummeled the Bahamas and put much of the U.S. East Coast on edge.

“We continue to loot our environment and it causes adverse weather,” said John Mohr, a 57-year-old self-described moderate Republican in Wilmington, North Carolina, where he was bracing for Dorian’s arrival.

On Tybee Island, Georgia, Tony and Debbie Pagan said they rarely worried about hurricanes after buying their home nearly 50 years ago.

Hurricane David in 1979 and Floyd in 1999 threatened them but did little damage. The last four years haven’t been so kind.

There Are Wide Differences in Assessments by Partisanship

Hurricane Matthew raked the island in 2016 and pushed several inches of floodwater into the Pagans’ low-lying house. Hurricane Irma the following year sent 2 feet of water surging into the home. And this year Hurricane Dorian threatened, but didn’t hit.

“This is climate change, though President Trump denies that it is. He needs to open his eyes.” — Tony Pagan, a 69-year-old retired electrician

“This is climate change, though President Trump denies that it is,” Tony Pagan, a 69-year-old retired electrician said as he and his wife finished packing to leave Wednesday. “He needs to open his eyes.”

Majorities of adults across demographic groups think weather disasters are getting more severe, according to the poll. College-educated Americans are slightly more likely than those without a degree to say so, 79% versus 69%.

But there are wide differences in assessments by partisanship. Nine in 10 Democrats think weather disasters are more extreme, compared with about half of Republicans.

Americans this summer also are slightly more likely to say disasters are more severe when compared with a similarly worded question asked after hurricanes in 2013 and 2017.

“People are catching up with the science! Extreme events are always partly due to natural variability, but we do think many are increasing in frequency because of climate change,” Cornell University climate scientist Natalie Mahowald said in an email. 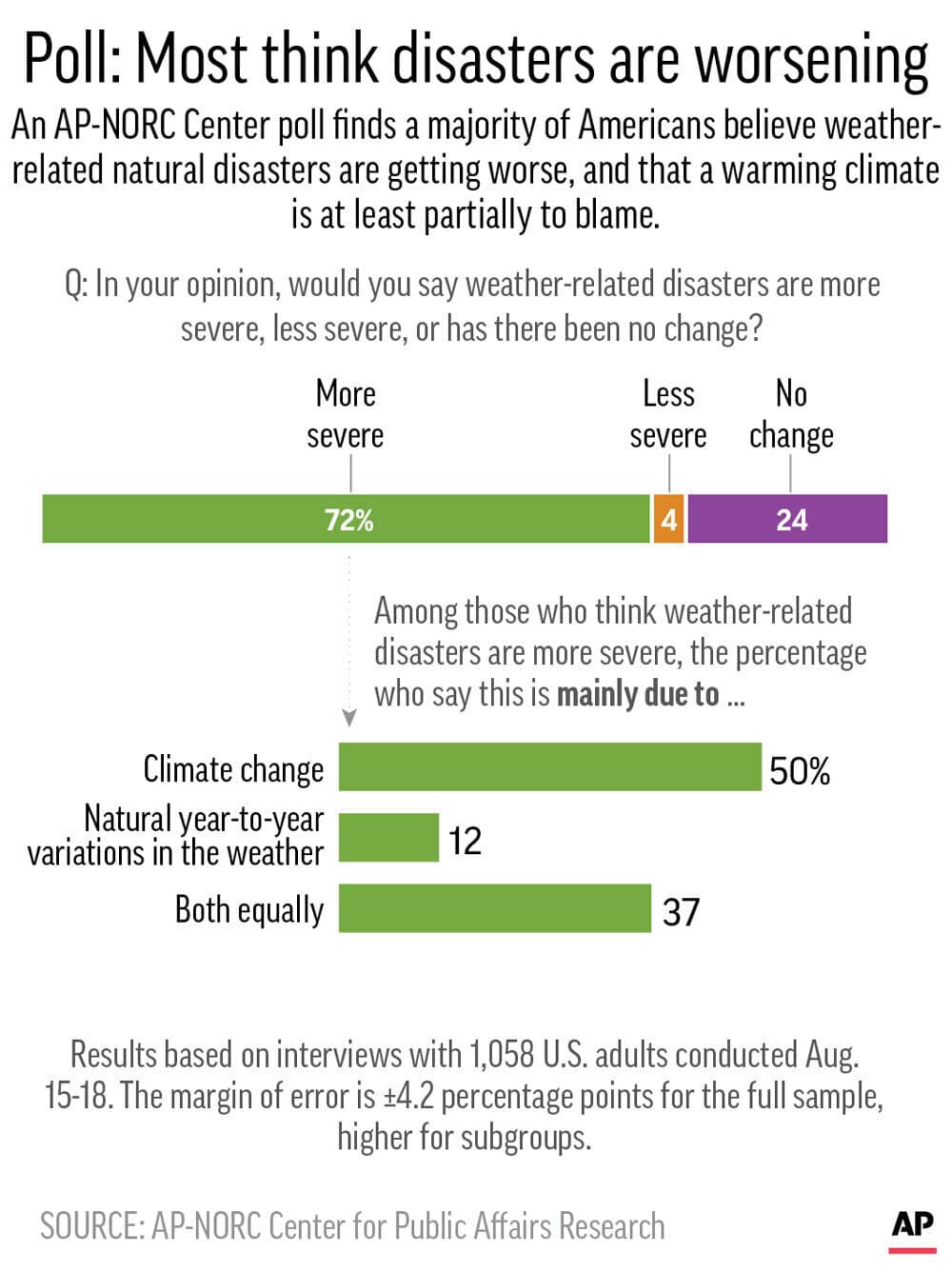 Chris Dennis, a 50-year-old registered nurse and self-described liberal Democrat in Greenville, South Carolina, said he is seeing more intense and more frequent weather disasters than in the past.

“Years ago, we didn’t hear of these kinds of storms, at least that frequently. [The] numbers are cranking up like the national debt clock … that’s pretty significant what we’re doing to our environment.” — Chris Dennis, a 50-year-old registered nurse

“Years ago, we didn’t hear of these kinds of storms, at least that frequently,” Dennis said, taking a break from watching the CNN forum on climate change for Democratic presidential candidates. He said he kept noticing the damning statistics on carbon dioxide put in the air, saying the “numbers are cranking up like the national debt clock … that’s pretty significant what we’re doing to our environment.”

Though she’s weary of dealing with storms three of the past four years, Sandy Cason of Tybee Island said she’s not ready to blame climate change. She noted Georgia got hit by several powerful hurricanes in the 1800s.

“If you go back and read, it’s a cyclical thing. It really is,” Cason said. “If you read enough about the old storms, I don’t think you can” attribute the most recent storms to climate change.

The AP-NORC poll of 1,058 adults was conducted Aug. 15-18 using a sample drawn from NORC’s probability-based AmeriSpeak Panel, which is designed to be representative of the U.S. population. The margin of sampling error for all respondents is plus or minus 4.2 percentage points. Respondents were first selected randomly using address-based sampling methods and later were interviewed online or by phone.