SANTA BARBARA — Divers and search crews were still looking Tuesday for nine missing people after at least 25 were confirmed dead when a boat packed with scuba divers caught fire near an island off the Southern California coast.

The dive-boat Conception became engulfed in flames before dawn as the passengers on a recreational scuba diving trip slept below deck.

Coast Guard Lt. Cmdr. Matthew Kroll said late Monday night at least 25 people died. He said 20 bodies were recovered and five others were found but not retrieved due to unsafe conditions under the boat, which sank in about 60 feet of water.

Kroll said the count of those found was based on initial reports and needed to be confirmed through autopsies.

The search for the missing went through the night and fog and low clouds on Tuesday were not expected to limit the search crews in their efforts, said Santa Barbara City Fire Department spokeswoman Amber Anderson

Five crew members sleeping on the top deck jumped off and took a dinghy to safety. Two had minor injuries. A sixth crew member was among the missing.

The Missing and Dead Were Among 39 Passengers and Crew

Meanwhile, authorities opened a family assistance center where counseling was being provided to relatives of those onboard. None of their names were immediately released.

One passenger, marine biologist and veteran diver Kristy Finstad, 41, was identified in a Facebook post by her brother, Brett Harmeling of Houston.

“Please pray for my sister Kristy!! She was leading a dive trip on this boat,” Harmeling wrote.

The missing and dead were among 39 passengers and crew who had departed Santa Barbara Harbor on Saturday aboard the boat for a Labor Day weekend trip.

The fire broke out about 3 a.m. as the Conception was anchored off Santa Cruz Island, about 90 miles west of Los Angeles. The crew appeared to quickly call for help.

“The call was garbled, it was not that clear, but we were able to get some information out of it to send vessels,” said Coast Guard Petty Officer Mark Barney.

Capt. Paul Amaral of the vessel assistance company TowBoatUS also launched a fast boat from Ventura Harbor, but it was some 30 miles (48 kilometers) away. By the time it got there around 5 a.m. a Coast Guard helicopter and a fireboat were on scene.

Amaral said he first searched the water and shoreline, then turned back to the Conception, which was adrift. He attached a line and pulled it into deeper water so the fireboats could reach it. 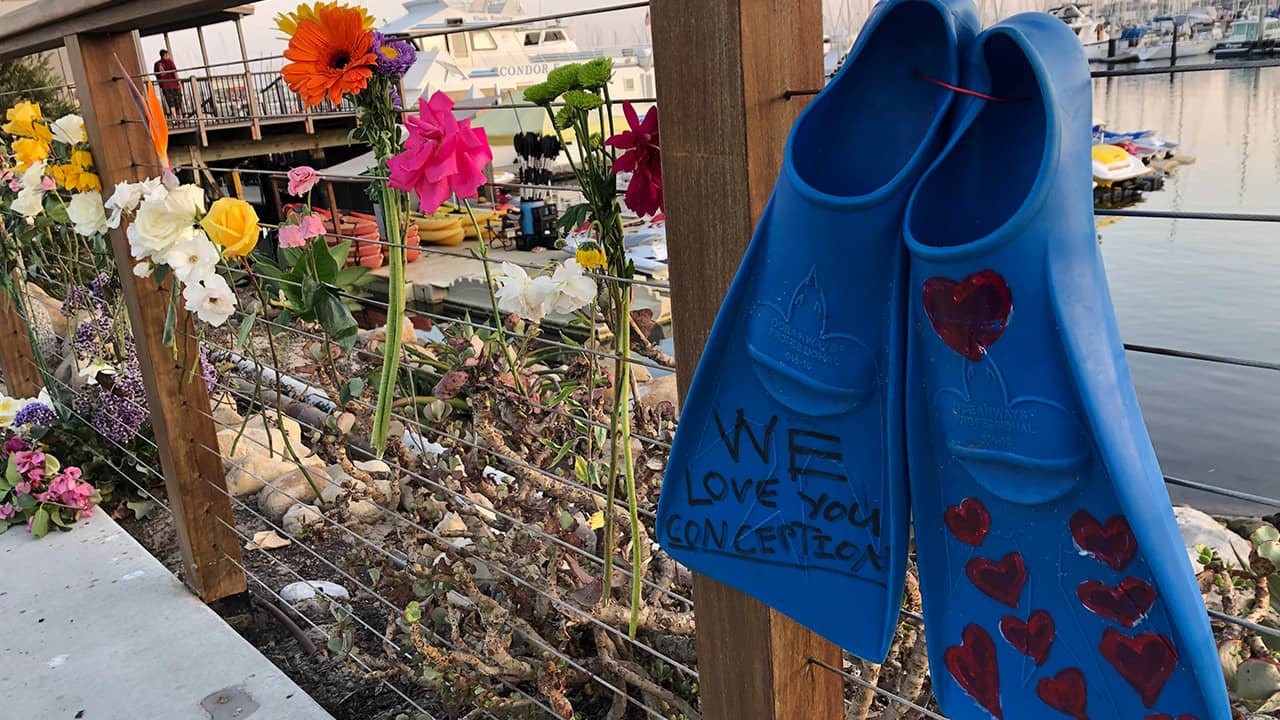 A memorial outside Truth Aquatics for the victims of the Conception boat fire, Monday, Sept. 2, 2019. A fire raged through a boat carrying recreational scuba divers anchored near an island off the Southern California coast early Monday, leaving multiple people dead and hope diminishing that any of the more than two dozen people still missing would be found alive. (AP Photo/Stefanie Dazio)

“We launched that boat knowing that the vessel was on fire, lots of people aboard,” he told The Associated Press.

“When we looked out, the other boat was totally engulfed in flames, from stem to stern. I could see the fire coming through holes on the side of the boat. There were these explosions every few beats. You can’t prepare yourself for that. It was horrendous.” — Bob and Shirley Hansen, the boat’s owners

The five crew members, meanwhile, went on the dinghy to a private fishing boat, The Grape Escape, that was anchored near the north shore of Santa Cruz Island.

That boat’s owners, Bob and Shirley Hansen, told The New York Times they were asleep when they heard pounding on the side of their 60-foot vessel about 3:30 a.m. and discovered the frightened crew members.

“When we looked out, the other boat was totally engulfed in flames, from stem to stern,” Hansen said. “I could see the fire coming through holes on the side of the boat. There were these explosions every few beats. You can’t prepare yourself for that. It was horrendous.”

Hansen said two of the crew members went back toward the Conception looking for survivors but found no one.

It was not immediately clear when the other bodies that have been found might be retrieved or when divers could search the boat for others.

“It’s upside down in relatively shallow water with receding tides that are moving it around,” Brown said. Investigators have not yet determined a cause for the fire.

Truth Aquatics Crews Have Always Been Meticulous With Safety

The 75-foot Conception was on a three-day excursion to the chain of rugged, wind-swept isles that form Channel Islands National Park in the Pacific Ocean west of Los Angeles. The fire broke out as the boat sat anchored in Platt’s Harbor off Santa Cruz Island.

Dave Reid, who runs an underwater camera manufacturing business with his wife, Terry Schuller, and has traveled on the Conception and two other boats in Truth Aquatics’ fleet, said he considered all three among the best and safest.

“When you see the boats they are always immaculate,” he said. “I wouldn’t hesitate at all to go on one again. Of all the boat companies, that would be one of the ones I wouldn’t think this would happen to.”

His wife said Truth Aquatics crews have always been meticulous in going over safety instructions at the beginning of every trip she’s been on.

“They tell you where the life jackets are, how to put them on … the exits, where the fire extinguishers are, on every single trip,” said Schuller. “They are the best, the absolute best.”

Some Violations Were Related to Fire Safety

Both said the sleeping area is comfortable but tight, however, with bunk beds stacked next to one another on the lowest deck. Coming up to the top deck to get off requires navigating a narrow stairway with only one exit.

“Right now it’s a big question of who was on there and who wasn’t. I’m scared to see the list of names, honestly.” — Andy Taylor, owner of Blue Water Hunter Dive Shop in Santa Barbara

If the fire was fast-moving, Reid said, it’s very likely divers couldn’t escape and the crew couldn’t get to them.

Coast Guard records show all safety violations from the last five years were quickly addressed by the boat’s owners. Some violations were related to fire safety. A 2016 inspection resulted in owners replacing the heat detector in the galley and one in 2014 cited a leaky fire hose.

The Conception was chartered by Worldwide Diving Adventures, which says on its website that it has been taking divers on such expeditions since the 1970s.

Andy Taylor, owner of Blue Water Hunter Dive Shop in Santa Barbara, said he discussed dive conditions with several people Friday as they were buying some last-minute things before boarding the Conception. Taylor said he often sends divers to Truth Aquatics for trips and he has friends who have crewed on the Conception.

He said he was on the phone all day Monday as friends checked to make sure he had not been on the boat.

“Right now it’s a big question of who was on there and who wasn’t,” he said. “I’m scared to see the list of names, honestly.”