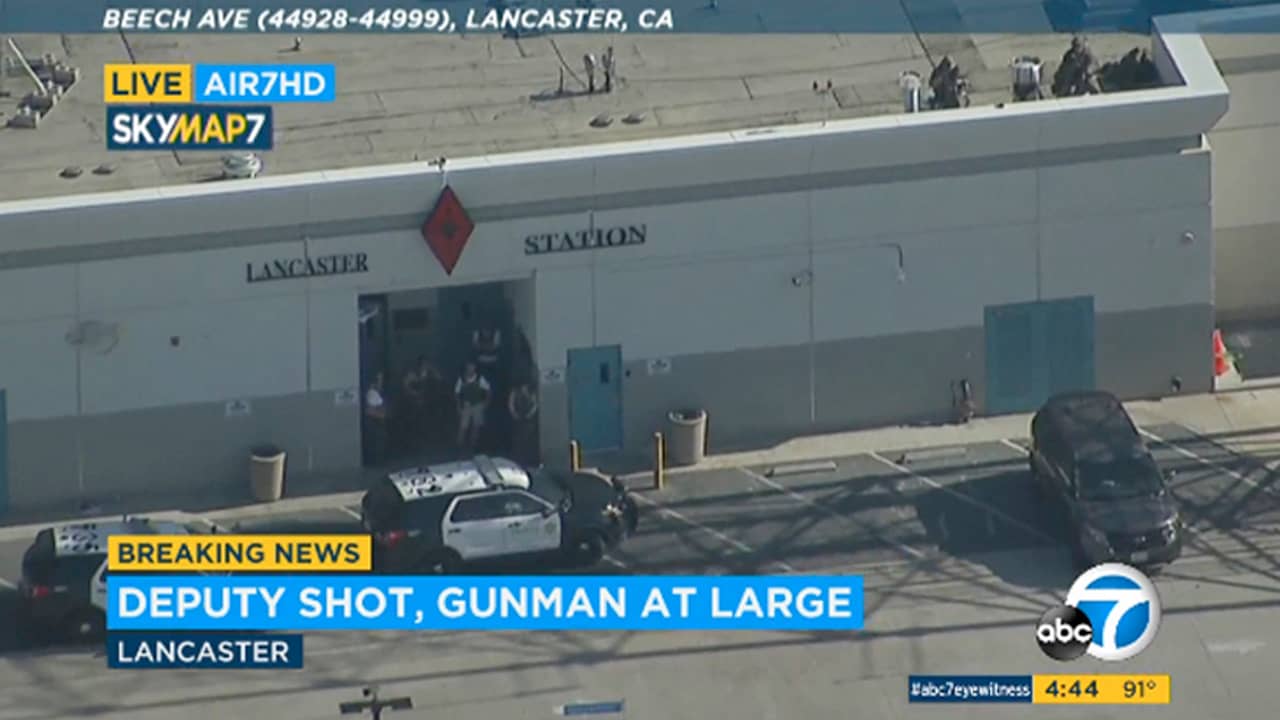 LOS ANGELES — A Los Angeles County deputy lied when he said he was shot in the shoulder while standing in a sheriff’s station parking lot last week and will face a criminal investigation, authorities said.
“The reported sniper assault was fabricated” by Deputy Angel Reinosa, Assistant Sheriff Robin Limon said at a news conference late Saturday.


“The reported sniper assault was fabricated [by Deputy Angel Reinosa].” — Assistant Sheriff Robin Limon
Reinosa, 21, made a frantic radio call Wednesday claiming he’d been shot by someone in a nearby building as he walked to his car outside the Lancaster station, prompting a huge police response. Deputies set up a perimeter and SWAT officers went door-to-door inside a sprawling building complex to search for the shooter.
At the time, investigators believed Reinosa’s bulletproof vest saved his life but that a bullet grazed him. A department statement the next day said a single round hit the top of Reinosa’s shoulder, damaging his uniform shirt but failing to penetrate his flesh.
But no bullets were recovered from the scene and detectives saw “no visible injuries,” Capt. Kent Wegener said Saturday night.
Much of the young deputy’s statement “was self-serving and didn’t make a whole lot of sense,” Wegener said. “There were many things that didn’t add up.”
Reinosa eventually admitted making up the story and using a knife to cut the two holes in his shirt, Wegener said.

Mayor Parris ‘Embarrassed’ After Learning Ordeal Was a Hoax

Reinosa has been relieved of his duties and could face charges for filing a false report about a crime, officials said. He didn’t explain his motive for the fabrication, Wegener said.
Reinosa had been with the LA County Sheriff’s Department for a year and joined the Lancaster station in May for patrol training.
Lancaster Mayor R. Rex Parris told the Los Angeles Times on Sunday he had been informed by sheriff’s officials that Reinosa had been struggling in his first year in the field — a probationary training period that all deputies must complete before becoming full-fledged deputies. Sheriff’s officials wouldn’t immediately confirm that account.

“He was not advancing through the training program at an adequate pace,” Parris told the newspaper. “There had been a lot of attention on him.”
Parris declined to elaborate further on Reinosa’s performance but said the deputy was scheduled to be transferred from the Lancaster station and speculated that he had been unhappy about the pending move.
The mayor visited Reinosa in the hospital and then gave a press conference on the incident Wednesday night detailing the ongoing investigation.
Parris said he was “embarrassed” after learning Saturday evening that the whole ordeal was a hoax.

Deputies Searched Through the Night for the Sniper

“At the same time, I’m grateful we don’t have a sniper running around,” the mayor told the newspaper. “And I’m really proud of how the Sheriff’s Department handled it. There was no attempt to cover it up.”


“At the same time, I’m grateful we don’t have a sniper running around. And I’m really proud of how the Sheriff’s Department handled it. There was no attempt to cover it up.” — Lancaster Mayor R. Rex Parris
Deputies searched through the night for the sniper inside the block-long, four-story structure with many windows that overlook the sheriff’s facility in downtown Lancaster, a desert city of about 160,000 people north of Los Angeles.
Tactical teams worked their way through the building, evacuating some people and having others shelter in place, officials said.
Deputies cleared other nearby buildings, including a library. Authorities urged residents to avoid the neighborhood.
Metrolink train service was halted in the area.
The search was called off Thursday and authorities said the shooter was still at large.
“Our deputies responded to a cry for help and did exactly what they have been trained to do to protect our civilian staff, residents and community,” said a department statement Sunday. “Our community and other first responder partners worked side by side with us to move quickly, effectively and efficiently. There is no shame in that.”
The statement concluded: “The actions of one individual are not indicative of who Lancaster Sheriff’s Station Deputies are.”
Related Topics:criminal investigationdeputyfabricationinjuriesLancasterLos Angeles CountysniperSWAT
Up Next