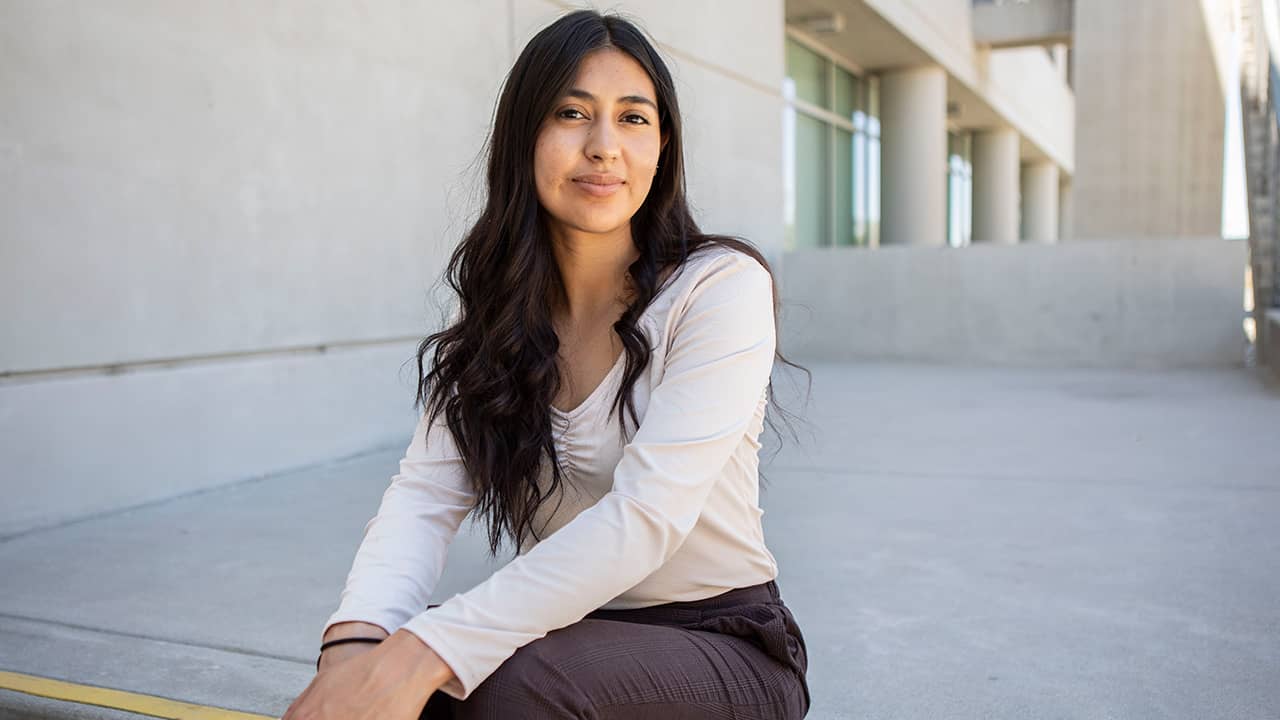 Alejandra Santoyo is drawn to the thrill of scientific discovery: identifying challenging questions and seeking her own answers. But even after declaring a major in cognitive science, the interdisciplinary study of how the mind works, the UC Merced student still didn’t know if she wanted to be a researcher.
“I was really unsure,” said the Bakersfield native. “I thought maybe I wasn’t smart enough or good enough, being a first-generation college student.” 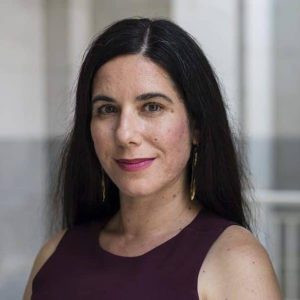 That changed after a summer spent strapping electrode-laden caps to volunteers’ heads in an effort to understand how the brain processes rhythm. Carried out as part of the university’s Summer Undergraduate Research Institute, the study could ultimately help patients with Parkinson’s Disease. And it has spurred Santoyo, who will apply to graduate programs at Merced, Stanford and UC Davis this fall, to pursue a career as a scientist.
As universities around the country struggle to diversify their faculty, the youngest University of California campus is racking up an impressive record of preparing its students — many of them low-income, first-generation students of color — for academic careers.
Its undergraduates are more likely to assist faculty with original research—a boon to graduate school applications—than those at any other UC campus, according to university surveys. The percentage of alumni who go on to earn doctoral degrees is second to that of UC Berkeley and tied with other selective campuses such as UCLA and UC San Diego.

The Pipeline Begins With the Summer Undergraduate Research Institute


“I was really unsure. I thought maybe I wasn’t smart enough or good enough, being a first-generation college student.” — Alejandra Santoyo
Overall graduation rates still lag behind those of other UC campuses. But the university’s focus on prying open the doors of the ivory tower for underrepresented groups stands out at a time when, according to a recent Pew Research Center study, less than a quarter of college and university faculty nationwide are non-white, while 45% of students are.
“We always hear major institutions, especially highly selective ones … tell you, ‘We can’t find faculty of color; they’re not in the pipeline,’ ” said Marybeth Gasman, director of the University of Pennsylvania’s Center for Minority Serving Institutions. “And yet so few people are willing to create those pipeline programs.”
At Merced, that pipeline begins with the Summer Undergraduate Research Institute, a nine-week boot camp in which students conduct independent projects under the oversight of a faculty mentor, while learning about graduate school, polishing their CVs and drafting personal statements.

The program also aims to bust misconceptions about academia, letting students know that funding is available for graduate study, and providing tips on dealing with impostor syndrome — that nagging feeling of not belonging that can make students doubt their own abilities and accomplishments. 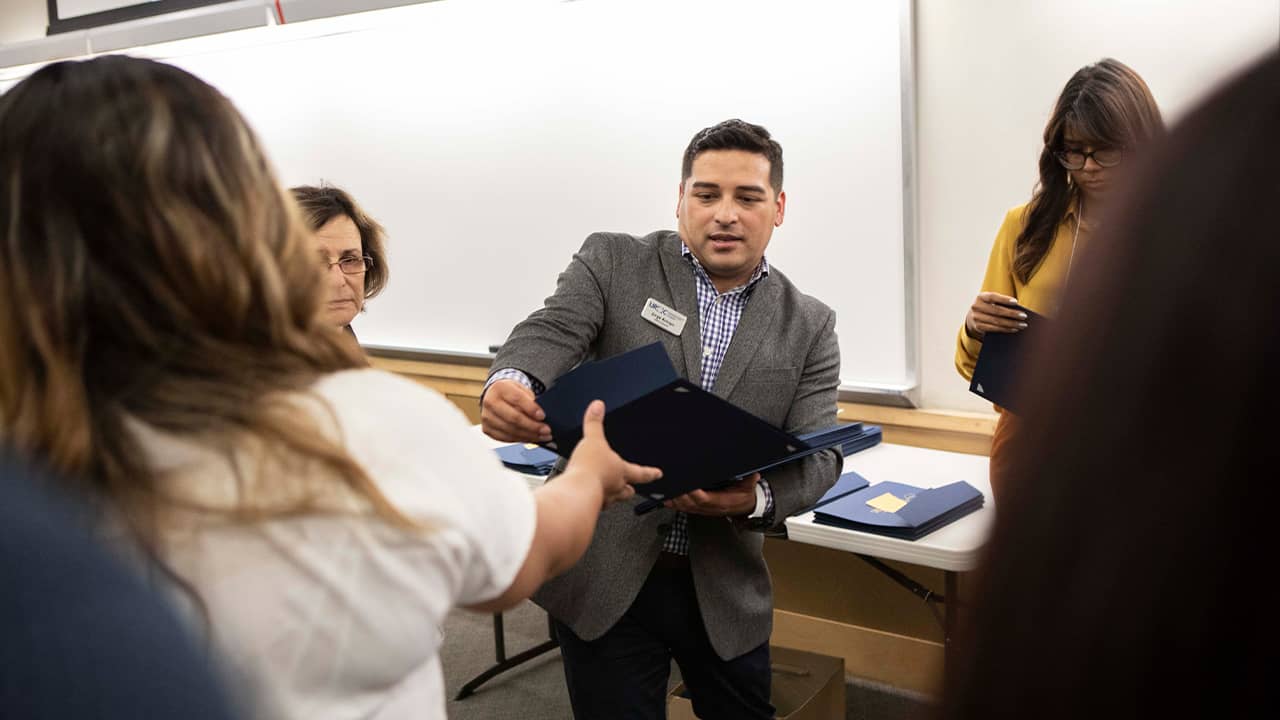 “At the beginning of the summer, I usually talk about the challenges I faced,” he said. “I tell them that I didn’t even know what graduate school was.”
Chemistry professor Eric Menke said the undergraduates he oversees in his lab seem to arrive with less preparation than those at UC Irvine, where he attended graduate school. But over their four years, he said, they catch up.
“They’re much more motivated and work harder,” he said. “And most of them are very grateful for the opportunity to do research.”

The First Tier of a Concerted Effort to Diversify the Professoriate

Many of the projects on display focused on communities in the Central Valley, an area that often draws little attention from policymakers. They ranged from a historical analysis of anti-Chinese laws passed in Merced in the late 1800s to a study of secondhand-smoke exposure in the area.
Senior Kaline Leke studied the academic and social success of black students at Merced. She recalled arriving there from Oakland, the campus rising like an alien city from golden fields, cows grazing nearby. The area was both more conservative and slower-paced than her hometown.
“It took a lot of adjustment,” she said. Black students were enrolling, but nearly a third were dropping out. Leke and her colleagues found that spaces designed to support black students, such as the themed dorm Afro Hall, helped them persist to graduation.
The undergraduate research programs are the first tier of a concerted effort to diversify the professoriate by focusing on each step of a student’s progress to success as a faculty member, said graduate dean Marjorie Zatz.
Incoming graduate students can enroll in their own summer program, where they learn the “hidden curriculum” of academia: how to tackle unfamiliar assignments like conducting a literature review. When to muddle through on your own. When to stop and ask questions of a professor or a post-doctoral student.
Ninety percent of participants are still pursuing graduate degrees three years later, Zatz said.

The campus also recently launched a Mellon Foundation-funded study of the extra labor faculty put in when they are committed to diversity, such as mentoring students, serving on committees and writing reference letters, said Zatz. Such tasks can take away from research time, she said. While the campus has a higher percentage of faculty from traditionally underrepresented groups than other UCs, many are not on a tenure track.

More Than 130 Students Participated This Year

While the campus’s summer institutes may help students see themselves as future professors, they also raise an important question, said Audrey Dow, senior vice president at the Campaign for College Opportunity, which published a report last year on the lack of diversity among California faculty: Are they scalable?
“When we talk about student success, we have tremendous examples of pilot [programs] that are successful. These things are expensive sometimes, but they’re not necessarily rocket science,” said Dow. “But how many students are you graduating each year? How does that spread across the UC system?”
And when it comes to hiring faculty from a range of backgrounds, Dow said, having a pool of qualified candidates isn’t the only challenge. Campus hiring practices play a big role, she said, as does whether candidates of color perceive a supportive environment.
More than 130 students participated in Merced’s Summer Undergraduate Research Institute this year, but nearly an equal number applied and were turned away due to lack of funds. Because the campus is so young, Zatz said, its alumni network is small, generating little funding for graduate fellowships.

‘It’s Only Strengthened My Resolve’

Arroyo hopes to raise money to support undergraduates who want to continue their summer projects during the school year. “A lot of our students end up working multiple jobs on campus, which takes away from their ability to focus on research or the graduate school application process.”


“I thought it would dissuade me. but it’s only strengthened my resolve.” — Maria Nguyen-Cruz, an actor and English major
After the poster session and an ice cream social, the budding researchers lined up to receive certificates recognizing their achievement.
Maria Nguyen-Cruz, an actor and English major whose project focused on grassroots productions of Shakespearean works as political activism, was among the students to take the stage.
“I fell in love with literature, the theater and being a performer all over again,” said Nguyen-Cruz, who plans to direct a bilingual production of Richard II in the town of Merced next year. She’d signed up for the institute because she was considering graduate school.
“I thought it would dissuade me,” she said, “but it’s only strengthened my resolve.”
This story and other higher education coverage are supported by the College Futures Foundation.
CalMatters.org is a nonprofit, nonpartisan media venture explaining California policies and politics.