The Fresno Unified School District board tabled a vote on a new bylaw detailing procedures for trustee censure at Wednesday’s board meeting, just two weeks after the board took the rare step of censuring a fellow trustee.

Board members said they wanted more time to review and provide comments on the proposed bylaw additions and revisions, including a new censure bylaw. They are scheduled to take the matter up again at the Sept. 18 school board meeting.

The proposed censure bylaw does not contain language allowing the board to order a trustee to undergo an anger management program or to remove a trustee’s indemnification from any legal claims or actions resulting from the trustee’s conduct. Both measures were included in an Aug. 7 censure of trustee Terry Slatic, the subject of a series of a complaints this year by Bullard students, a wrestling coach, and an Army recruiter that have been or are being investigated by the district.

“We’ve now established the protocol for this board president and board majority, ‘Well, if it doesn’t say we can’t do it, we can do it.’ It opens up that genie’s bottle.” — trustee Terry Slatic

Drafts of two new bylaws and revisions of two other bylaws were added to the Fresno Unified board agenda Tuesday afternoon.

Slatic told GV Wire that he considers the censure bylaw to be irrelevant because the board’s attorney told the trustees at the Aug. 7 meeting that nothing in the bylaws prohibited the censure resolution. In effect, the board established a precedent, he said.

“We crossed the Rubicon at that previous meeting with the board attorney, acting very uncomfortably, when he was made to say, ‘Well, we can do this because there’s nothing in there that says you can’t do it,” Slatic said. “At this point, it doesn’t matter what it says in the document. We’ve now established the protocol for this board president and board majority, ‘Well, if it doesn’t say we can’t do it, we can do it.’ It opens up that genie’s bottle.”

Slatic has said that he will pursue action to overturn the censure resolution sections that require him to undergo anger management counseling and that remove his indemnification. He said his attorney, Charles Manock, is in consultation with the district’s attorney over the matter.

The proposed censure bylaw would establish procedures for the board to follow when considering whether a trustee’s conduct merits a formal reprimand. If the matter cannot be resolved through discussion with either the board president or clerk and the trustee, a request for a censure hearing would need to be submitted to the president or clerk by not fewer than two board members and not more than three, with specific information on the allegations and how they constitute a violation of board bylaws.

That limitation was set to conform with the state’s Brown Act that requires open meetings for a quorum of elected officials, said Carol Mills, who serves on the bylaws committee with board President Claudia Cazares and trustee Keshia Thomas. Neither Cazares nor Thomas could be immediately reached for comment.

“I think there was just a sense from some board members that maybe we need to have a process embedded in the bylaws, so that if the issue should ever arise again, we’re not starting from square one.” — trustee Carol Mills
The matter would then be placed on a board agenda at a regular or special meeting for public discussion. A copy of the request for censure, with background documentation, would have to be sent to board members at least five days before the board meeting.

After review at the meeting, the board would determine whether to further investigate the allegations, orally censure the trustee, schedule a public hearing to adopt a formal censure resolution or take no action. Any further investigation would be done by an ad hoc committee appointed by the board president or clerk. If the censure goes to a public hearing, the trustee targeted for censure must have 10 business days to prepare a response.

By contrast, the censure resolution against Slatic was added to the board agenda only three business days prior to the board’s 6-0 vote to approve it.

Mills said she wanted to include the 10-day period in the proposed censure bylaw to give sufficient time for due process. 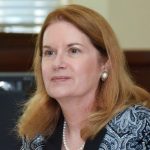 The board also will consider a new bylaw with procedures on how to file a complaint against a school board member, which would require a signed and dated letter written to the district superintendent.

Incidents involving board members, on the other hand, would be reported in a signed and dated report to the executive director of constituent services. The proposed bylaw specifies that such incidents would not be subject to a district investigation.

“We’ve never had bylaws for that (censure and complaints against board members) before, and I think there was just a sense from some board members that maybe we need to have a process embedded in the bylaws, so that if the issue should ever arise again, we’re not starting from square one, that we have a bylaw and process in place,” Mills said.

Other revisions would add sections in the bylaws for board governance and committees.

Some of the new bylaws and revisions mirror language that was in Slatic’s censure resolution, including that board members should: Refrain from rude or abusive conduct, or personal attacks or verbal attacks against other board members, district employees or the public; direct questions or requests for information to the superintendent, chief of staff or a designee; avoid unscheduled drop-in meetings with the superintendent unless for limited emergencies; not attend internal staff meetings or meetings with administration and third parties unless invited by district or site administration, or board authorization; sign in when visiting schools and identify as a trustee.

The bylaw committee began considering the two new bylaws and revisions to two existing bylaws before the summer break, Mills said. Drafts were sent to trustees to give them the opportunity for review and to provide comment to the chief of staff, she said. After further review and a few tweaks, the bylaws committee was ready to forward its proposals to the board, Mills said.

Slatic’s censure came after a series of complaints were lodged against him, accusing him of being abusive and unprofessional and of exceeding his role as a board member. The resolution included details from a series of incidents involving Slatic and a Bullard High student, a Bullard wrestling coach, an Army recruiter at the campus, and Bullard cheerleaders, all of which have been or are being investigated by the district. The first incident involving the 15-year-old Bullard student on campus was in January, barely two months after Slatic was elected.

Slatic is due in court on Monday for a hearing into a request from a Bullard cheerleader for a restraining order against him. He is accused of entering a cheer practice and threatening to boot off the cheer squad any girls who continued to comment on the discipline that resulted from a social media post of a cheerleader wearing blackface and saying the n-word. After the district decided not to remove the cheerleader from the squad, community protests about racism at Bullard have continued to occur.

Through the end of June, the district had paid $114,000 for its investigations of complaints made against Slatic.