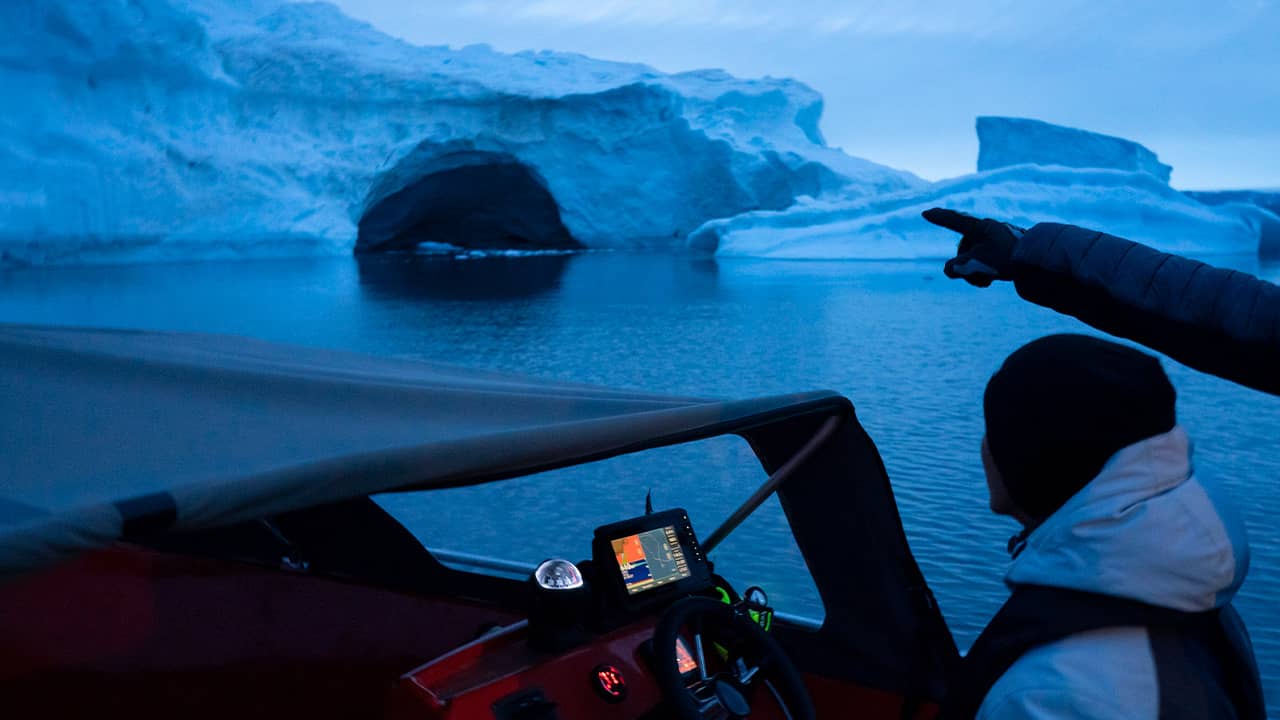 HELHEIM GLACIER, Greenland — This is where Earth’s refrigerator door is left open, where glaciers dwindle and seas begin to rise.


By the end of the summer, about 440 billion tons of ice — maybe more — will have melted or calved off Greenland’s giant ice sheet, scientists estimate.
New York University air and ocean scientist David Holland, who is tracking what’s happening in Greenland from both above and below, calls it “the end of the planet.” He is referring to geography more than the future. Yet in many ways this place is where the planet’s warmer and watery future is being written.

It is so warm here, just inside the Arctic Circle, that on an August day, coats are left on the ground and Holland and colleagues work on the watery melting ice without gloves. In one of the closest towns, Kulusuk, the morning temperature reached a shirtsleeve 52 degrees Fahrenheit.
The ice Holland is standing on is thousands of years old. It will be gone within a year or two, adding yet more water to rising seas worldwide.
Summer this year is hitting Greenland hard with record-shattering heat and extreme melt. By the end of the summer, about 440 billion tons of ice — maybe more — will have melted or calved off Greenland’s giant ice sheet, scientists estimate. That’s enough water to flood Pennsylvania or the country of Greece about a foot deep. 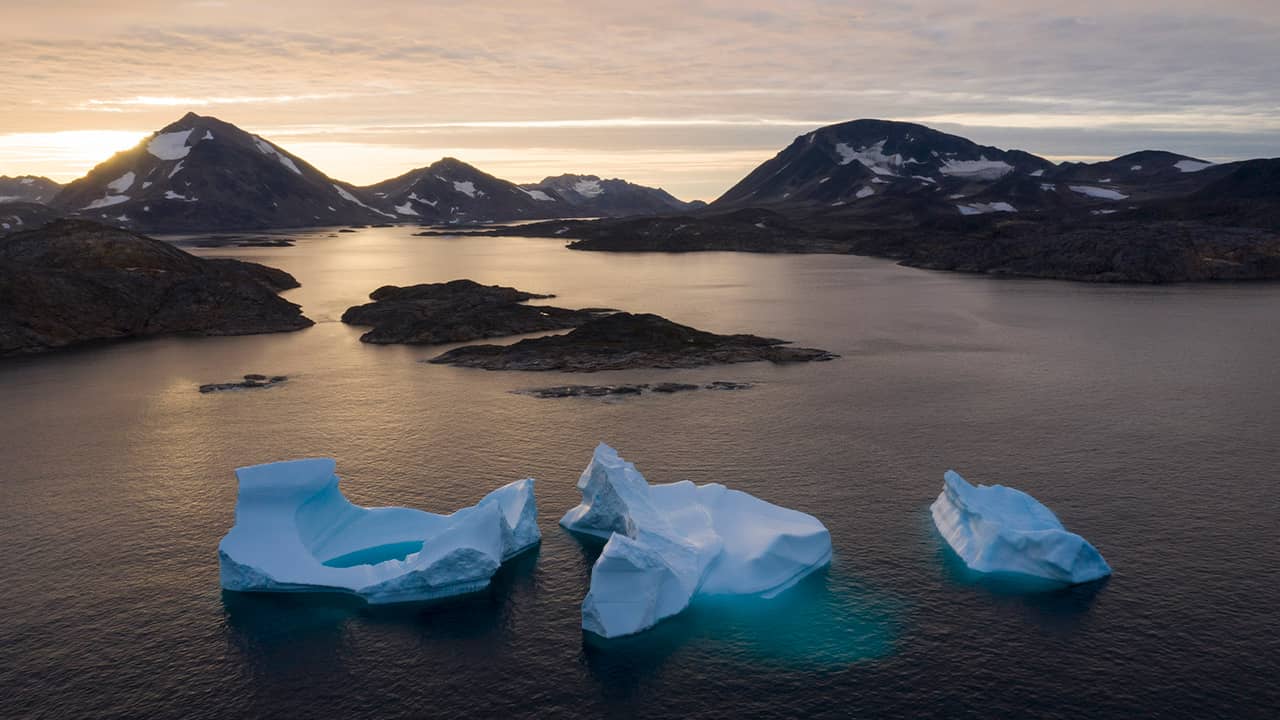 In this Aug. 16, 2019, photo, large Icebergs float away as the sun rises near Kulusuk, Greenland. Scientists are hard at work, trying to understand the alarmingly rapid melting of the ice. (AP Photo/Felipe Dana)

More Than 58 Billion Tons Melted From the Surface

In just the five days from July 31 to Aug. 3, more than 58 billion tons melted from the surface. That’s over 40 billion tons more than the average for this time of year. And that 58 billion tons doesn’t even count the huge calving events or the warm water eating away at the glaciers from below, which may be a huge factor.
And one of the places hit hardest this hot Greenland summer is here on the southeastern edge of the giant frozen island: Helheim, one of Greenland’s fastest-retreating glaciers, has shrunk about 6 miles since scientists came here in 2005.
Several scientists, such as NASA oceanographer Josh Willis, who is also in Greenland, studying melting ice from above, said what’s happening is a combination of man-made climate change and natural but weird weather patterns. Glaciers here do shrink in the summer and grow in the winter, but nothing like this year.
Summit Station, a research camp nearly 2 miles high and far north, warmed to above freezing twice this year for a record total of 16.5 hours. Before this year, that station was above zero for only 6.5 hours in 2012, once in 1889 and also in the Middle Ages.
This year is coming near but not quite passing the extreme summer of 2012 — Greenland’s worst year in modern history for melting, scientists report.

“If you look at climate model projections, we can expect to see larger areas of the ice sheet experiencing melt for longer durations of the year and greater mass loss going forward,” said University of Georgia ice scientist Tom Mote. “There’s every reason to believe that years that look like this will become more common.”


“If you look at climate model projections, we can expect to see larger areas of the ice sheet experiencing melt for longer durations of the year and greater mass loss going forward. There’s every reason to believe that years that look like this will become more common.” — University of Georgia ice scientist Tom Mote
A NASA satellite found that Greenland’s ice sheet lost about 255 billion metric tons of ice a year between 2003 and 2016, with the loss rate generally getting worse over that period. Nearly all of the 28 Greenland glaciers that Danish climate scientist Ruth Mottram measured are retreating, especially Helheim.
At Helheim, the ice, snow and water seem to go on and on, sandwiched by bare dirt mountains that now show no signs of ice but get covered in the winter. The only thing that gives a sense of scale is the helicopter carrying Holland and his team. It’s dwarfed by the landscape, an almost imperceptible red speck against the ice cliffs where Helheim stops and its remnants begin.
Those ice cliffs are somewhere between 225 feet and 328 feet high. Just next to them are Helheim’s remnants — sea ice, snow and icebergs — forming a mostly white expanse, with a mishmash of shapes and textures. Frequently water pools amid that white, glimmering a near-fluorescent blue that resembles windshield wiper fluid or Kool-Aid.


It Takes a Really Long Time to Grow an Ice Sheet

As pilot Martin Norregaard tries to land his helicopter on the broken-up part of what used to be glacier — a mush called a melange — he looks for ice specked with dirt, a sign that it’s firm enough for the chopper to set down on. Pure white ice could conceal a deep crevasse that leads to a cold and deadly plunge.
Holland and team climb out to install radar and GPS to track the ice movement and help explain why salty, warm, once-tropical water attacking the glacier’s “underbelly” has been bubbling to the surface
“It takes a really long time to grow an ice sheet, thousands and thousands of years, but they can be broken up or destroyed quite rapidly,” Holland said.
Holland, like NASA’s Willis, suspects that warm, salty water that comes in part from the Gulf Stream in North America is playing a bigger role than previously thought in melting Greenland’s ice. And if that’s the case, that’s probably bad news for the planet, because it means faster and more melting and higher sea level rise. Willis said that by the year 2100, Greenland alone could cause 3 or 4 feet (more than 1 meter) of sea level rise.
So it’s crucial to know how much of a role the air above and the water below play.
“What we want for this is an ice sheet forecast,” Holland said.
In this remote landscape, sound travels easily for miles. Every several minutes there’s a faint rumbling that sounds like thunder, but it’s not. It’s ice cracking. 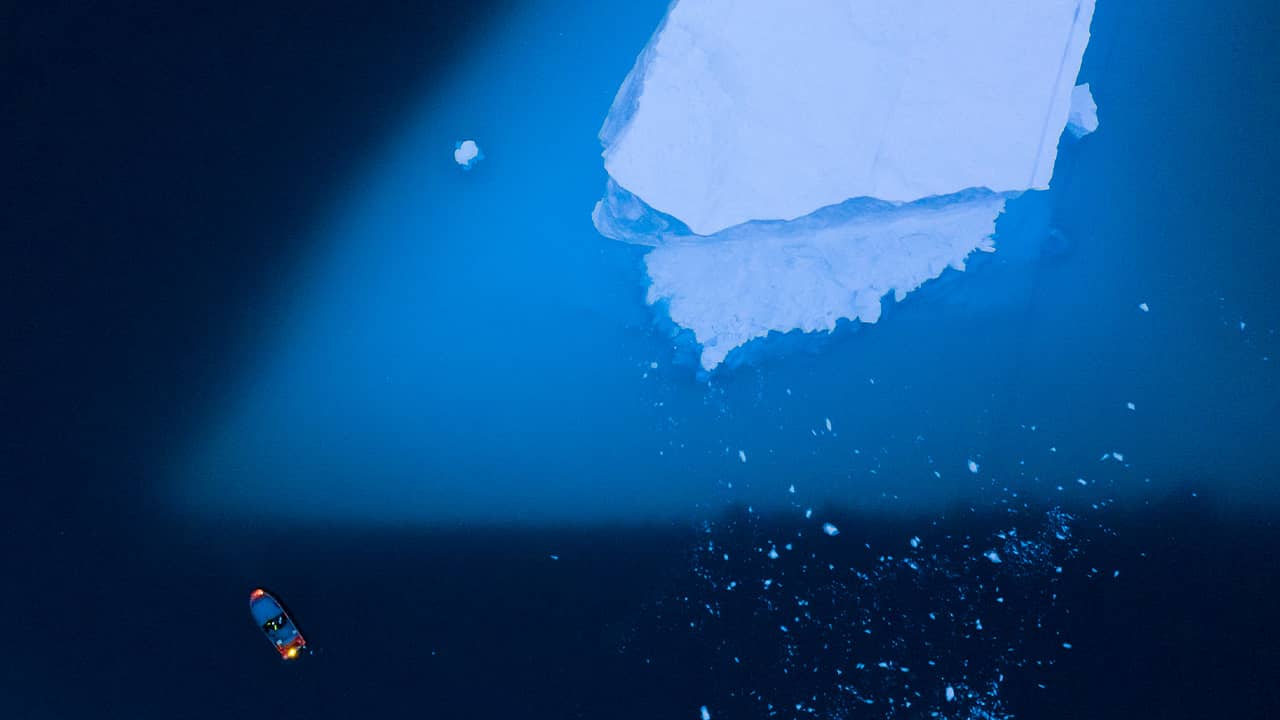 In this Aug. 15, 2019, photo, a boat navigates next to a large iceberg in eastern Greenland. Greenland’s ice has been melting for more than 20 years, but in 2019, it’s as if Earth’s refrigerator door has been left open, and it means a potentially large rise in the world’s sea levels. (AP Photo/Felipe Dana)

It’s Not Good. Not for Here. Not for Earth as a Whole.

In tiny Kulusuk, about a 40-minute helicopter ride away, Mugu Utuaq says the winter that used to last as much as 10 months when he was a boy can now be as short as five months. That matters to him because as the fourth-ranked dogsledder in Greenland, he has 23 dogs and needs to race them.


“People are getting rid of their dogs because there’s no season.” — Yewlin
They can’t race in the summer, but they still have to eat. So Utuaq and friends go whale hunting with rifles in small boats. If they succeed, which this day they didn’t, the dogs can eat whale.
“People are getting rid of their dogs because there’s no season,” said Yewlin, who goes by one name. He used to run a sled dog team for tourists at a hotel in neighboring Tasiilaq, but they no longer can do that.
Yes, the melting glaciers, less ice and warmer weather are noticeable and much different from his childhood, said Kulusuk Mayor Justus Paulsen, 58. Sure, it means more fuel is needed for boats to get around, but that’s OK, he said.
“We like it because we like to have a summer,” Paulsen said.
But Holland looks out at Helheim glacier from his base camp and sees the bigger picture. And it’s not good, he said. Not for here. Not for Earth as a whole.
“It’s kind of nice to have a planet with glaciers around,” Holland said.
Related Topics:EarthglaciersGreenlandHelheimmass lossmelting iceNASAscientistsummer
Up Next

US Stocks Fall After 3 Straight Days of Gains