CHEYENNE, Wyo. — “Taco Tuesday” may be a well-known term for a themed dinner night out or at home, but as restaurants across the U.S. have learned, it’s also trademarked.

Wyoming-based Taco John’s — which has nearly 400 locations in 23 states — put its legal stamp on “Taco Tuesday” 30 years ago and has since zinged cease-and-desist letters at offenders far and wide.

Now, a recent example is stirring a debate that hits close to home for the fast-food chain.

Taco John’s last month sent a warning to a brewery five blocks from its national headquarters for using the term to advertise a taco truck that parks outside its establishment once a week.

“We certainly appreciate our fellow community member’s enthusiasm for tacos on Tuesdays, and the term is often used inadvertently,” read the letter addressed to “Sir or Madam” at Freedom’s Edge Brewing Co. “However, it is still extremely important to us to protect our rights in this mark.”

Freedom’s Edge took the matter to Facebook, and the comments poured in.

“We have nothing against Taco John’s but do find it comical that some person in their corporate office would choose to send a cease and desist to a brewery that doesn’t sell or profit from the sales of tacos,” the brewery wrote.

Some people rallied to the chain’s defense, pointing out that Taco John’s itself started as a humble food trailer 50 years ago and legitimately secured the trademark, while others said it’s time for Taco John’s to lighten up.

“I have some choice words for a corporate company that is infringing on local small businesses trying to keep afloat. LONG LIVE #nottacotuesday,” wrote one Cheyenne resident, Jackie Suntrup.

It’s kind of asinine to me think that one particular taco seller, or taco maker, would have monopoly rights over ‘Taco Tuesday,'” — Attorney Michael Atkins

“I know that we’ve been seen as a bully, some corporate giant that is protecting this brand, but really it’s us protecting the little guy,” Maara told the audience. “Great ideas can come from the most unexpected places, and when they do, we should protect it.”

Taco John’s isn’t the only company that has drawn attention for defending a trademark against small businesses. Starbucks made headlines when it went after a Texas bar owner who created a “Star Bock” beer. And Gerber has been known to guard its “onesie” trademark against mom-and-pop crafters who design one-piece infant outfits to sell online. 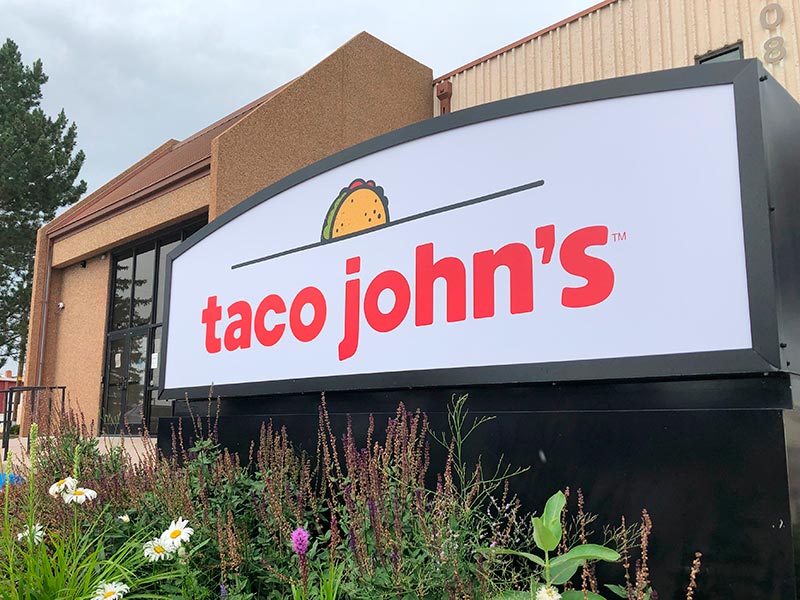 Wyoming-based Taco John’s restaurant trademarked “Taco Tuesdays” more than 30 years ago. It has taken action to prevent others from using the term.  (AP Photo/Mead Gruver)

When it comes to “Taco Tuesday,” a legal expert doubts Taco John’s has much of a case.

Like “raisin bran,” ”escalator,” ”nylon” and other formerly trademarked products, “Taco Tuesday” has suffered from “genericide” — it has become too well-known to continue to be identified with a particular company, said Seattle-based attorney Michael Atkins. The term even made a fairly significant appearance in “The Lego Movie,” a 2014 kid film based on the popular plastic toys.

“It’s kind of asinine to me think that one particular taco seller, or taco maker, would have monopoly rights over ‘Taco Tuesday,'” Atkins said. “It has become such a common phrase that it no longer points to Taco John’s and therefore Taco John’s doesn’t have the right to tell anybody to stop using that.”

The company trademarked “Taco Tuesday” in 1989, claiming a Minnesota franchisee began using “Taco Twosday” to advertise two tacos for 99 cents in the early 1980s. The trademark applies in every state but New Jersey, where another restaurant already had secured the right to “Taco Tuesday.”

Taco John’s has encountered pushback elsewhere. In 2014, a Madison, Wisconsin, restaurant responded with a competition to rename its Taco Tuesdays. A woman who came up with “Ole Tuesdays” won the prize of a year’s supply of tacos.

Freedom’s Edge Brewery co-owner Tim Moore said he had no idea “Taco Tuesday” was trademarked but got a laugh out of the situation. He didn’t intend to push back, he said.

But one industry observer has some advice for Taco John’s: “No te hagas,” which translates from Spanish as “don’t put on airs” or “don’t be haughty.”

“For them to trademark ‘Taco Tuesday’ I find to be a culinary sin. For them to go after people who use the term ‘Taco Tuesday’ is an abomination,” said Gustavo Arellano, a Los Angeles Times features writer and author of “Taco USA: How Mexican Food Conquered America.”

Meanwhile, Nena Hermosillo, owner of the “La Barata” taco truck unaffiliated with the brewery, has paid little mind. She wasn’t even involved in the “Taco Tuesday” promotion.

Serving good food made with fresh ingredients, and serving people well, is more important than any trademark, she said.

Anyway, she said, people like her tacos, but her Mexican hamburgers are the best around.