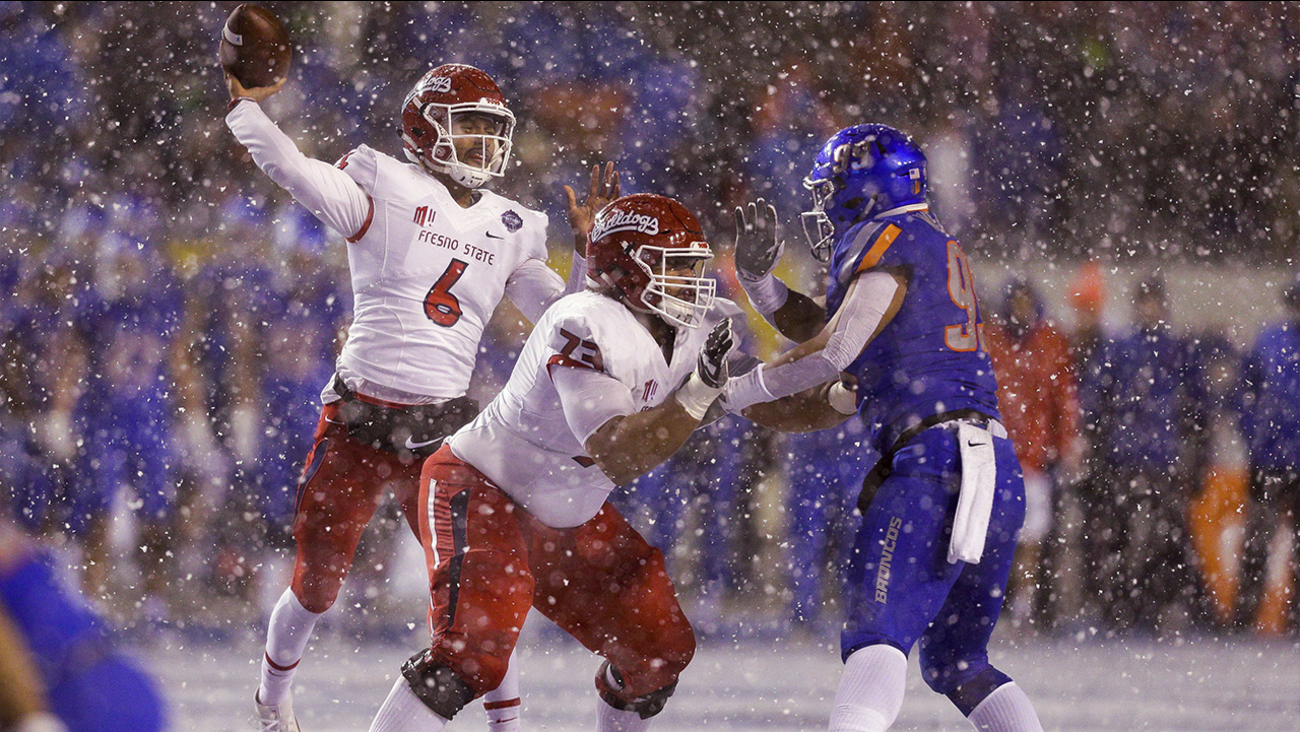 DENVER — Now this was a sweet idea: Candy hearts with Jordan Love’s name and number stamped on them to hype the Heisman Trophy campaign of the Utah State quarterback.
After posting big numbers a season ago, Love was voted the Mountain West’s top offensive player in a preseason poll.
There’s no sugar-coating the league favorites in Boise State and Fresno State. It’s no surprise given the two played in the title game a season ago and in three of the conference’s six championship contests.


Just an FYI: The conference has captured four in a row over Pac-12 teams (Nevada beat Oregon State, Fresno State beat UCLA, San Diego State over Arizona State and Fresno State over Arizona State).
The 21st edition of the league has a deep-rooted feeling of familiarity. Of course, there’s the stalwart: San Diego State coach Rocky Long, who’s been around for every Mountain West season (19 as a coach of New Mexico/SDSU, one as a coordinator at SDSU).
Even a new face has a familiar look: Aggies coach Gary Andersen.
Although, the last time Andersen roamed the sidelines for Utah State (2009-12), the Aggies resided in the Western Athletic Conference. He’s taking over for Matt Wells, who went to Texas Tech after leading Utah State to double-digit wins. Asked if there were any differences between training camp now with Utah State compared to back then, Andersen cracked: “That was a lot of rodeos ago.”
This version of the league might be a little more wide open.

Tedford Has Built the Bulldogs Into a Powerful Program

Boise State doesn’t have reliable quarterback Brett Rypien under center anymore. He’s now with the NFL Broncos after signing as an undrafted free agent with Denver. Coach Bryan Harsin will break in a new QB.

Other things to know:

The league will have seven games air exclusively on Facebook, beginning with Weber State at San Diego State on Aug. 31. It’s a delicate balance between televised games and streaming games, Commissioner Craig Thompson said.
“You’ve got 30- or 40-year-olds with a couple of children and need to go to a soccer match during a Saturday or run to Home Depot and do projects and want to keep up with the game,” Thompson said. “We’re trying to serve them all.” The Mountain West has tie-ins with five bowls: Las Vegas Bowl, New Mexico Bowl, Famous Idaho Potato Bowl, Hawaii Bowl and Arizona Bowl. They also have backup spots with the Cheez-It Bowl, Frisco Bowl and Redbox Bowl.
Beginning in 2020, the Arizona Bowl will feature eligible teams from the Mid-American Conference and the Mountain West, which has been tied to the bowl since its inaugural game in 2015.

UNLV has a series of celebrations planned to bid farewell to Sam Boyd Stadium in its 49th and final season. The off-campus facility opened in 1971. The team moves to the state-of-the-art, $1.9 billion Las Vegas Stadium that’s closer to campus. The final game is Nov. 23 against San Jose State.