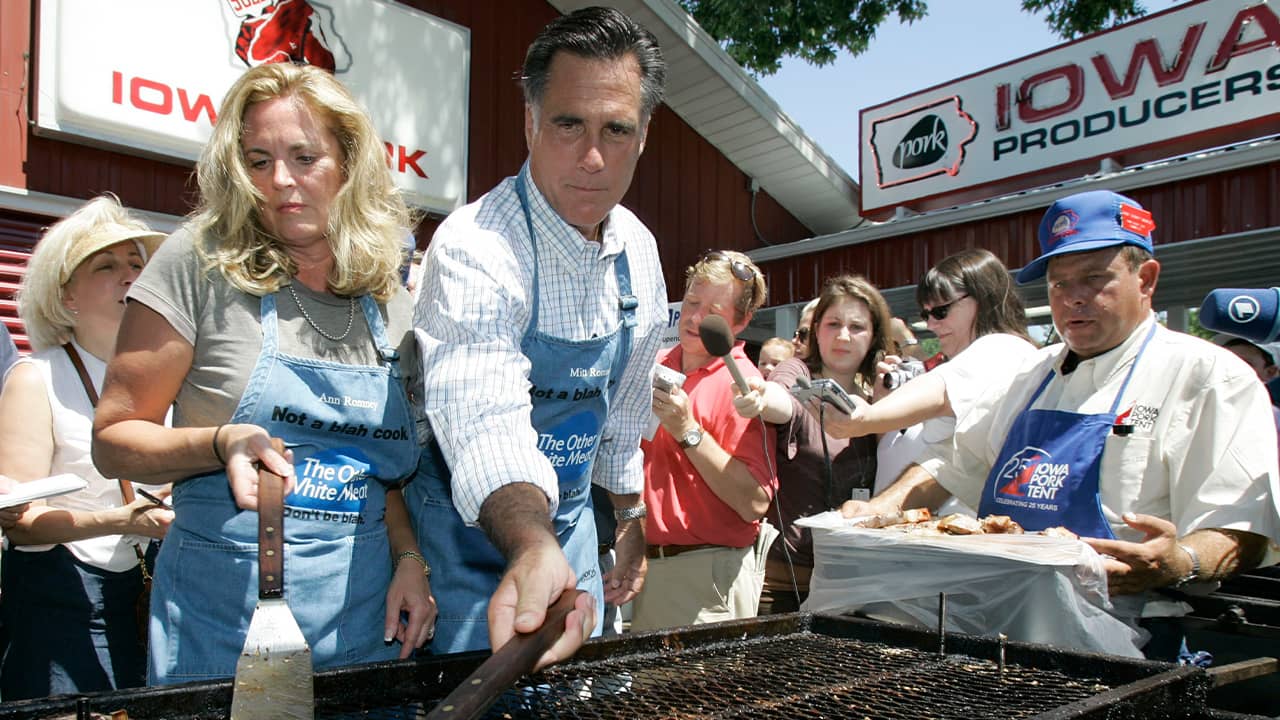 DES MOINES, Iowa — Howard Dean took one bite of a deep-fried Oreo and dismissively pitched the rest into the garbage.
Mitt Romney famously flipped a pork chop, right into the gravel. And John Kerry capped his Iowa State Fair fare with a strawberry smoothie, rather than a cold beer that offered a chance for him to seem connected with regular folks.

Joe Biden, who will return to the fair Thursday, would know.
In August 1987, he lifted passages of a speech by British Labor Party leader Neil Kinnock’s speech without attribution during a 1987 Democratic candidates’ debate at the fair. The revelation punctuated previous questions of plagiarism that shadowed Biden and led ultimately to his early drop from the 1988 race.
It was an epic fair fail. But presidential history also is sprinkled with winning performances.
In 2007, Barack Obama’s romp through the Midway with his family — and iconic turn on the bumper cars with his daughter Sasha — cast a glow over the rising Illinois senator.
But for every such gauzy memory, there are more clunkers, or worse yet, permanent scars.
In 2007, amid heavy expectations, former Republican Sen. Fred Thompson famously made his Iowa debut by attending the Iowa State Fair wearing a pair of $500 Gucci loafers.
That was after he was chauffeured down the voter-packed Grand Concourse by golf cart to meet his escort, the notoriously frugal Iowa Sen. Chuck Grassley. Thompson stayed aboard the cart, waving only occasionally at the many star-struck voters who recognized him. 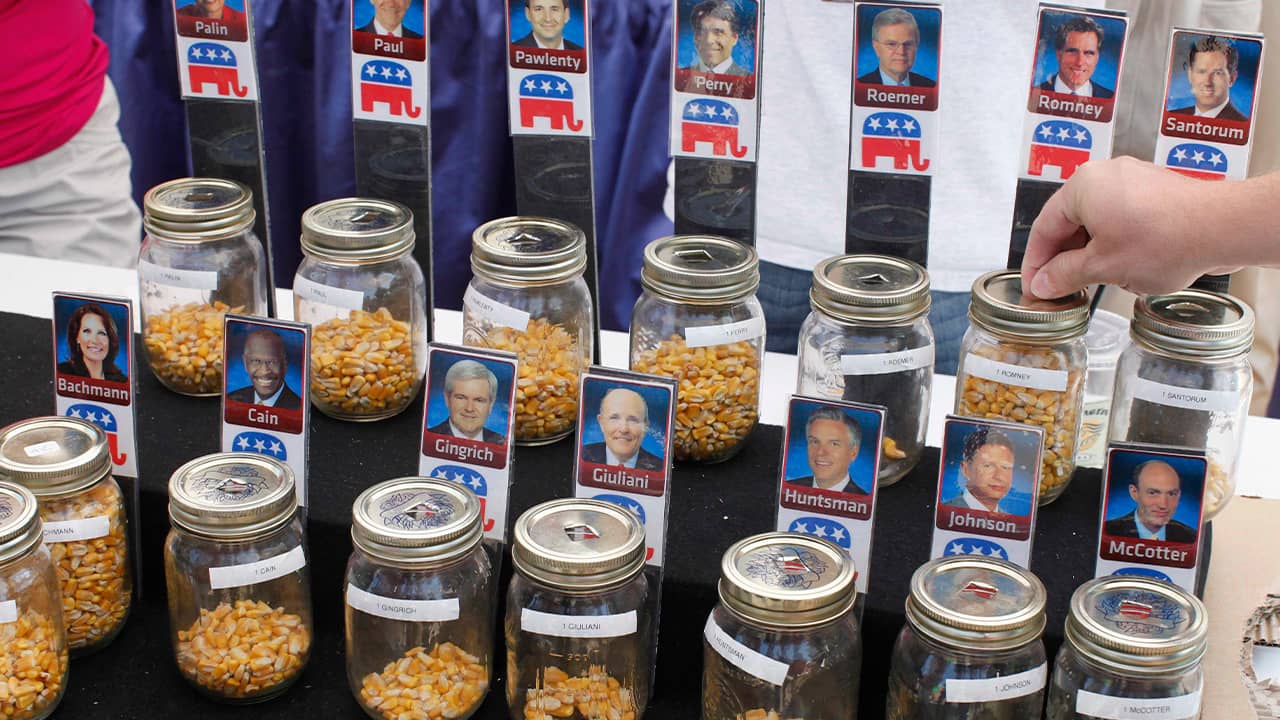 A 2011 photo shows an informal “corn poll” at the Iowa State Fair in Des Moines. The state fair is a cultural obstacle course for presidential candidates. (AP Photo/Charles Dharapak, File)

The episode was hardly a black eye. But, just as Kerry’s smoothie contributed to questions about the Massachusetts senator’s connection to regular folk, Thompson’s less-than-enthusiastic embrace of the time-honored Iowa tradition clashed with the down-home Southerner he often portrayed as an actor.

In 2002, then-political editor Blair Claflin mused about promoting the Register while drawing candidates, otherwise given to holding court while roaming the fairgrounds, to a single location.
Claflin’s idea, a take on 19th century street-corner oratory, would become the Register’s Political Soapbox. Now entering its 18th year, the once simple straw-bale and poor-quality microphone setup has evolved into a constructed stage that campaign organizers pack with supporters in hopes of projecting momentum.
“Under the best of circumstances, I figured it might become a quaint Iowa State Fair tradition, requiring just a microphone and a few bales of hay,” said Claflin, now director of sustainability communications at Cummins Inc. in Indiana. “More than 20 presidential candidates over a week speaking from a stage? I never imagined anything like that.”
In 2015, would-be presidential nominees Hillary Clinton and Donald Trump skipped the Register venue during their fair tours. Trump made a decidedly Trumpian entrance, on his private helicopter. But he had the crowd when he provided children a ride.
Their decision to skip the speechifying may have been influenced by Romney’s contentious episode at the Register venue in 2011, when the former Massachusetts governor got in a testy back-and-forth with protesters, eliciting one of the 2012 campaign’s most memorable, if awkward, lines. 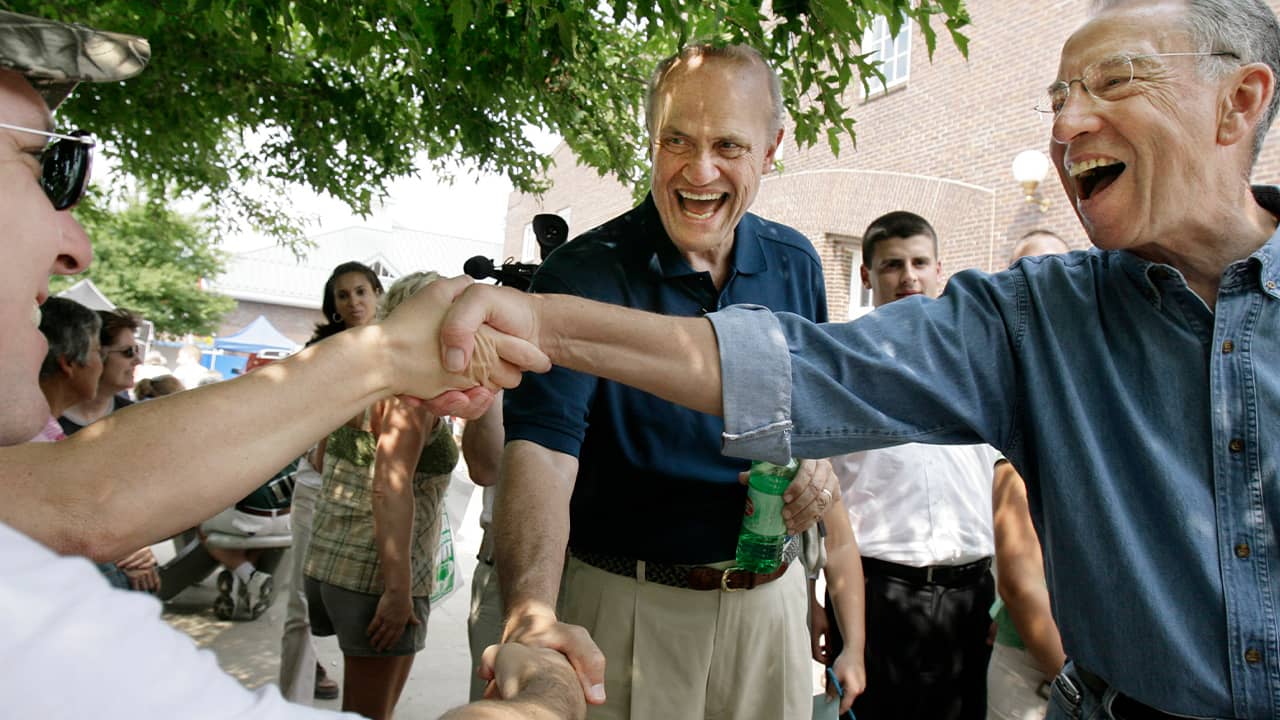 What a Candidate Eats Often Is Scrutinized

“Corporations are people, my friend. Of course they are,” Romney countered to a protester angry that corporations weren’t paying higher taxes. “Everything corporations earn ultimately goes to people.”
The exchange, captured by the crowd of national media on hand, punctuated the narrative that the wealthy former venture capitalist was out of sync with voters.


“Corporations are people, my friend. Of course they are. Everything corporations earn ultimately goes to people.” — Mitt Romney
Then there are achingly awkward moments that point to a candidate’s long odds.
Bob Graham sang from the Register venue, “You’ve got a friend in Bob Graham,” a tune he’d attributed to his 40 years of success in Florida politics. The smattering of applause became a metaphor for Graham’s presidential campaign, which ended before the caucuses.
But what a candidate eats often is the most scrutinized, if certainly visual, image at the fair, home to deep-fried everything.
Not to be outdone by anyone, then-Ohio Gov. John Kasich wolfed down not one but three pork chops at the must-stop Iowa Pork Producers complex.
Despite the minefield the fair presents, candidates can gain something beyond a strategic advantage in Iowa if they listen to the people they meet, said veteran Republican strategist Bob Haus.
“People are honest. They’ll tell you what they think because they’re on their turf, and often have a few beers in them,” Haus said. “So you honestly get feedback. A lot you like, and some you may not.”
Related Topics:candidatescaucusesdeep-fried OreoIowaIowa State FairkickoffMitt Romneysway
Up Next