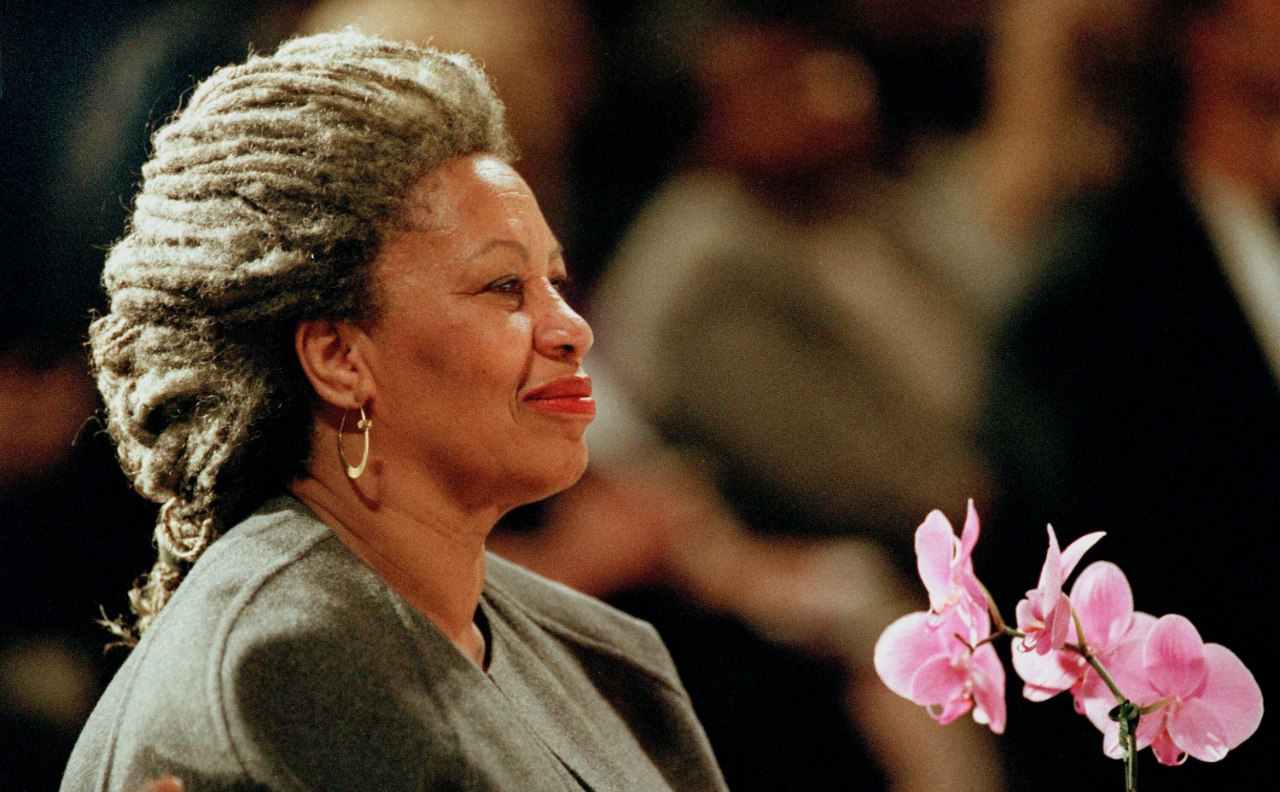 NEW YORK — Nobel laureate Toni Morrison, a pioneer and reigning giant of modern literature whose imaginative power in “Beloved,” ”Song of Solomon” and other works transformed American letters by dramatizing the pursuit of freedom within the boundaries of race, has died at age 88.
Publisher Alfred A. Knopf announced that Morrison died Monday night at Montefiore Medical Center in New York. Morrison’s family issued a statement through Knopf saying she died after a brief illness.

Narrative is ‘One of the Principal Ways We Absorb Knowledge’

Morrison helped raise American multiculturalism to the world stage and helped uncensor her country’s past, unearthing the lives of the unknown and the unwanted, those she would call “the unfree at the heart of the democratic experiment.” In her novels, history — black history — was a trove of poetry, tragedy, love, adventure and good old gossip, whether in small-town Ohio in “Sula” or big-city Harlem in “Jazz.” She regarded race as a social construct and through language founded the better world her characters suffered to attain. Morrison wove everything from African literature and slave folklore to the Bible and Gabriel Garcia Marquez into the most diverse, yet harmonious, of literary communities.
“Narrative has never been merely entertainment for me,” she said in her Nobel lecture. “It is, I believe, one of the principal ways in which we absorb knowledge.”
Winner of the 1988 Pulitzer Prize for “Beloved,” she was one of the book world’s most regal presences, with her expanse of graying dreadlocks; her dark, discerning eyes; and warm, theatrical voice, able to lower itself to a mysterious growl or rise to a humorous falsetto. “That handsome and perceptive lady,” James Baldwin called her.
Her admirers were countless — from fellow authors, college students and working people to Barack Obama, who awarded her a Presidential Medal of Freedom; to Oprah Winfrey, who idolized Morrison and helped greatly expand her readership. Morrison shared those high opinions, repeatedly labeling one of her novels, “Love,” as “perfect” and rejecting the idea that artistic achievement called for quiet acceptance.

Child of a Welder

“Maya Angelou helped me without her knowing it,” Morrison told The Associated Press during a 1998 interview. “When she was writing her first book, ‘I Know Why the Caged Bird Sings,’ I was an editor at Random House. She was having such a good time, and she never said, ‘Who me? My little book?’
“I decided that … winning the (Nobel) prize was fabulous,” Morrison added. “Nobody was going to take that and make it into something else. I felt representational. I felt American. I felt Ohioan. I felt blacker than ever. I felt more woman than ever. I felt all of that, and put all of that together and went out and had a good time.”
The second of four children of a welder and a domestic worker, Morrison was born Chloe Ardelia Wofford in Lorain, Ohio, a steel town outside of Cleveland. She was encouraged by her parents to read and to think, and was unimpressed by the white kids in her community. Recalling how she felt like an “aristocrat,” Morrison believed she was smarter and took it for granted she was wiser. She was an honors student in high school, and attended Howard University because she dreamed of life spent among black intellectuals.
At Howard, she spent much of her free time in the theater (she had a laugh that could easily reach the back row) and met and married a Jamaican architect, Harold Morrison, whom she divorced in 1964. They had two children, Harold and Slade.
But although she went on to teach there, Howard disappointed her. Campus life seemed closer to a finishing school than to an institution of learning. Protesters were demanding equality. Morrison wanted that, too, but wondered what kind.

Worked as a Book Editor

“I thought they wanted to integrate for nefarious purposes,” she said. “I thought they should demand money in those black schools. That was the problem — the resources, the better equipment, the better teachers, the buildings that were falling apart — not being in some high school next to some white kids.”
In 1964, she answered an ad to work in the textbook division of Random House. Over the next 15 years, she would have an impact as a book editor, and as one of the few black women in publishing, that alone would have ensured her legacy. She championed emerging fiction authors such as Gayl Jones and Toni Cade Bambara, helped introduce U.S. readers to such African writers as Wole Solinka, worked on a memoir by Muhammad Ali and topical books by such activists as Angela Davis and Black Panther Huey Newton. A special project was editing “The Black Book,” a collection of everything from newspaper advertisements to song lyrics that anticipated her immersion in the everyday lives of the past.
By the late ’60s, she was a single mother and a determined writer who had been pushed by her future editor, Robert Gottlieb of Alfred A. Knopf, into deciding whether she’d write or edit. Seated at her kitchen table, she fleshed out a story based on a childhood memory of a black girl in Lorain — raped by her father — who desired blue eyes. She called the novel “The Bluest Eye.”

Morrison prided herself on the gift of applying “invisible ink,” making a point and leaving it to the reader to discover it, such as her decision to withhold the skin color of her characters in “Paradise.” Her debut as an author came at the height of the Black Arts Movement and calls for literature as political and social protest. But Morrison criticized by indirection; she was political because of what she didn’t say. Racism and sexism were assumed; she wrote about their effects, whether in “The Bluest Eye” or in “Sula,” a story of friendship and betrayal between two black women.
“The writers who affected me the most were novelists who were writing in Africa: Chinua Achebe, ‘Things Fall Apart,’ was a major education for me,” Morrison, who had studied William Faulkner and Virginia Woolf as a graduate student, told the AP in 1998.
“They took their black world for granted. No black writer (in America) had done that except for Jean Toomer with ‘Cane.’ Everybody else had some confrontation with white people, which was not to say that Africans didn’t, but there was linguistically an assumption. The language was the language of the center of the world, which was them.
“So that made it possible for me to write ‘The Bluest Eye’ and not explain anything. That was wholly new! It was like a step into an absolutely brand new world. It was liberating in a way nothing had been before!”
She had no agent and was rejected by several publishers before reaching a deal with Holt, Rhinehart and Winston (now Henry Holt and Company), which released the novel in 1970. Sales were modest, but her book made a deep impression on The New York Times’ John Leonard, an early and ongoing champion of her writing, which he called “so precise, so faithful to speech and so charged with pain and wonder that the novel becomes poetry.”
Setting her stories in segregated communities, where incest and suicide were no more outrageous then a sign which reads “COLORED ONLY,” Morrison wrote of dreamers for whom the price was often death, whether the mother’s tragic choice to murder her baby girl — and save it from slavery — in “Beloved,” or the black community that implodes in “Paradise.”
Like Faulkner, her characters are burdened by the legacy, and ongoing tragedy, of slavery and separation. For Faulkner’s white Southerners, losers of the Civil War, the price is guilt, rage and madness; for Morrison’s slaves and their descendants, supposedly liberated, history follows like the most unrelenting posse.
“The future was sunset; the past something to leave behind,” Morrison wrote in “Beloved,” in which the ghost of the slain daughter returns to haunt and obsess her mother.
“And if it didn’t stay behind, well, you might have to stomp it out. Slave life; freed life — every day was a test and a trial. Nothing could be counted on in a world where even when you were a solution you were a problem.”
Morrison’s breakthrough came in 1977 with “Song of Solomon,” her third novel and the story of young Milkman Dead’s sexual, social and ancestral education. It was the first work by a black writer since Richard Wright’s “Native Son” to be a full Book-of-the-Month selection and won the National Book Critics Circle award. It was also Morrison’s first book to center on a male character, a novel which enabled her “get out of the house, to de-domesticate the landscape.”
But the mainstream was another kind of education. Reviewing “Song of Solomon,” author Reynolds Price chided Morrison for “the understandable but weakening omission of active white characters.” (He later recanted). When “Beloved” was overlooked for a National Book Award, a letter of protest from 48 black writers, including Angelou and Amiri Baraka, was published in The New York Times Book Review, noting that Morrison had never won a major literary prize.
“Beloved” went on to win the Pulitzer and Morrison soon ascended to the very top of the literary world, winning the Nobel and presiding as unofficial laureate of Winfrey’s book club, founded in 1996. Winfrey chose “Song of Solomon,” ”The Bluest Eye,” ”Paradise” and “Sula” over the years and would list all of Morrison’s works as among her favorites. Winfrey also starred in and helped produce the 1998 film version of “Beloved.”
As with so many other laureates, Morrison’s post-Nobel fiction was viewed less favorably than her earlier work. Morrison received no major competitive awards after the Nobel and was criticized for awkward plotting and pretentious language in “Love” and “Paradise.” But a novel published in 2008, “A Mercy,” was highly praised. “Home,” a brief novel about a young Korean War veteran, came out in 2012 and was followed three later by a contemporary drama, “God Help the Child.”
Morrison’s other works included “Playing in the Dark,” a collection of essays; “Dreaming Emmet,” a play about the slain teenager Emmett Till; and several children’s books co-authored with her son, Slade Morrison (who died of cancer in 2010). In November 2016, she wrote a highly cited New York essay about the election of Donald Trump, calling his ascension to the presidency a mark of what whites would settle for to hold on to their status.
“So scary are the consequences of a collapse of white privilege that many Americans have flocked to a political platform that supports and translates violence against the defenseless as strength. These people are not so much angry as terrified, with the kind of terror that makes knees tremble,” she wrote.

Ray O'Canto 'Overwhelmed' by Support As He Battles Cancer