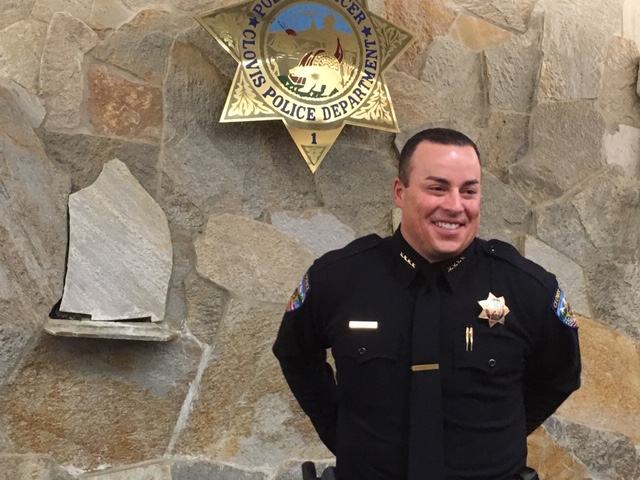 First, Curt Fleming’s wife, Jackie, and their 9-year-old son, Aiden, pinned on his badge.
Then, by raising his right hand and swearing an oath to protect and serve, Fleming took his place as the Clovis chief of police at a ceremony Monday at police headquarters.
It’s a promotion for Fleming, who most recently served as a captain in the department.
“I have the greatest job in the nation,” he told his colleagues, family, and other well-wishers.
Fleming said he doesn’t plan to make any major changes to the department.
“Clovis is already a great department. Really, just small tweaks here and there,” Fleming said. “I will do everything I can to maintain the culture of our department, the service we provide to our citizens.”

Fleming, a Bullard High School and Fresno State graduate, started his law enforcement career with the Fresno Police Department in 1999. He took a job with Clovis in 2006 and received promotions to corporal (2012), sergeant (2013), lieutenant (2015), and captain (2018).
During his Clovis tenure, Fleming oversaw many different parts of the department, most recently patrol, records and communications.
Fleming now heads a staff of 200, with a $40 million annual budget.
He replaces Matt Basgall, who retired Friday after five years as chief. City manager Luke Serpa appointed Fleming to the position June 14.

While Fleming plans to keep the status quo on police service, he recognized the challenges his department faces as the city grows. More housing developments are approved every month.
“Our city is growing so fast. Our department is not really able to keep up with that growth,” Fleming said. He did say they have enough officers to patrol, with four vacancies.
Fleming said the way to tackle policing shortage is using technology. He noted his department uses 450 police cameras in the city to monitor the high-traffic area, as well as the number of festivals and special events there. He said it is important to use all policing tools in the light of last weekend’s mass shootings in El Paso, Texas, and Dayton, Ohio.
That includes using large police vehicles and metal poles as blockade devices.

The four most recent Clovis police chiefs lasted an average of five years. Serpa, the man in charge of hiring the new chief, had an explanation.
“It’s a high-demand job,” Serpa said. “I’m sure after five years, they’re exhausted.”
When asked about his outlook, Fleming answered he will be on the job as long as he is capable and wants to leave Clovis in good hands. He did say he hopes to lead the department a minimum of six-plus years, when he turns 50.